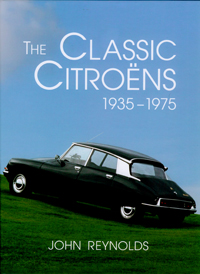 First things first, this book really goes beyond 1975, devoting the penultimate chapter to the 1974–1989 GSX and a brief final chapter to the 1976–2000 cars built by the PSA Group in the post-Michelin era. Then again, the word “classic” in the title is the clue here inasmuch as in the era in which the Société Michelin—the Michelin Tire Company—controlled the carmaker, its product was different then that produced by, first, André Citroën until bankruptcy forced him to cede control to Michelin, his largest creditor, and, after 1975, when financial pressures forced Michelin to sell an 89.95% stake to rival Peugeot. Citroëns from the classic, the “Monsieur Bibendum” era made up three of the 26 semi-finalists in the Car of the Century competition in November 1999—the largest number for any one manufacturer.

“A story of contrasting achievement and failure on the grandest possible scale, it reads today like an adventure novel and shows without doubt that André Citroën was truly one of the founders of the modern world.”

At the time of its writing this book was, in fact, the first to critically examine, and recast, the Citroën-Michelin relationship. Aside from anything else the book accomplishes, this topic alone makes it a singular and worthwhile addition to the bookshelf and one might well say that its nuanced portrayal makes this book Reynolds’ finest work in his large canon of Citroën books. A widely published professional motoring author and journalist, he is a lifelong Citroën enthusiast and, certainly in the English language, the marque’s most ardent chronicler. If you know any of his other books you already know he is a good writer; “erudite” would be just the word, and capable of rousing prose. He credits the late Jan Norbye (d. 2003) who had written the small but significant book Michelin Magic (1982) with engaging in extensive correspondence with him and making available his research materials for that book. Reynolds considers this of critical importance for his own book because understanding that relationship is a crucial component in understanding the cars they built together—each company being cutting-edge in its own right and together building cars of unrivaled innovation that were not only vastly different from the competition but also from each other, requiring a compatible vision among the principals and uncommon boldness. If nothing else, the reader will gain a profound understanding of the symbiotic relationship between the disciplines of tire and of car design. André Citroën died a mere 18 months after the takeover but his engineer André Levèbvre and stylist Flaminio Bertoni would blossom during the Michelin era.

After laying the groundwork in the form of a very solid Introduction and a long biographical chapter about André Citroën, the focus of the model-specific part of the book shifts to the TA, 2CV and H, DS, ID, Ami-6, SM, GS/GSA, CX with, as mentioned above, a summary treatment of the PSA cars (Visa, BX, AX, XM, and experimental cars ECO-2000, Activa 1 and 2, and Ecole). Concept/design, development, and model history including derivatives is covered in good detail. Supplemental material is interspersed in the main narrative rather than in the form of sidebars, such as a multi-page treatment of Levèbvre and Bertoni as part of the DS chapter. Also incorporated into the main text are reams of performance, spec, and production data which doesn’t so much make for difficult reading at times but hampers comparative analysis unless the reader brings pen and paper to the task. The majority of the photos are from Citroën press material and Michelin archives. All are b/w, some quite large, and, given the quality and age of the source material—and McFarland’s typical matte paper—are reproduced much sharper than one might expect. They follow the text rather well, which does not specifically refer to them anyway, and are quite extensively captioned. Being mostly press photos they predominantly show finished cars (as opposed to design and manufacturing), often with women at the wheel (a particular point of pride with André Citroën who from the beginning dismissed the notion that the car was just for men). There are also several ads and brochures and half-page cutaways for all but the TA and 2CV/H models.

Appended are seven pages of specs of only the first iteration (i.e. excluding derivatives) of each of the nine principal postwar models (read: not the PSA cars). Reynolds being a British author would have rendered his units of measure in the metric system but, throughout the text, dimensions and weights are in this edition given as metric units, but speed is also expressed in mph, and torque only in lb/ft not nM. Readers will thus have to do some mental math (no conversion table is provided). There is a decent Bibliography and a brief Index of mostly people.

Price isn’t everything, but in the hands of a different publisher this would have been a coffee table book with fine paper and color photos. McFarland doesn’t do that. Whatever reason they have for doing their books their way, it cannot solely be attributable to cost and surely not to consumer preference. At $55 this is not a cheap book, and even Haynes Publishing—hardly the name that comes to mind when we think of opulent books—has managed to produce a better-looking and very similar book by the same author (Citroën – Daring To Be Different, ISBN 1 85960 896 5) at only $35.95/£19.99. By comparison, Reynolds’ fabulous $70/£39 book Eighty Years of Citroën in the United Kingdom for Dalton Watson Fine Books whose products are the very embodiment of the fine book looks positively cheap.