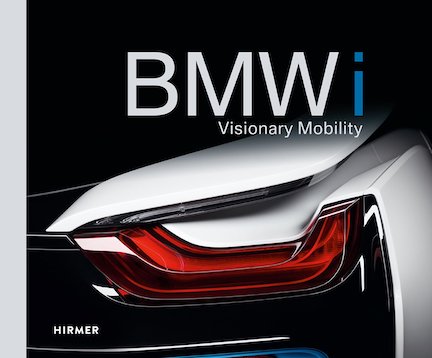 “What only a handful of insiders knew at the time was that, despite the colorful approach

and forward-looking programme, in those early years BMW i hung from a slender thread. It faced a strong headwind within its own company and doubts as to whether electromobility would be able to convince regular customers.”

(German / English) If you think carbon fiber is neat you’ve probably never run your hands across . . . kenaf. From sourcing to recycling, this book looks at every aspect of BMW’s take on sustainability.

This is not a new topic for BMW and goes, in fact, much further back than the 2007 announcement that it was going to become the dominant corporate goal. Already by 2011 the i3 and i8 concept cars made the auto show rounds, and by 2025 there will be 25 electric or hybrid models sporting that iconic kidney grille (which will be utterly useless inasmuch as it won’t be needed for cooling; weirdly, the 2019 i4 Concept was “graced” by a superlarge bucktoothed affair behind which are housed various forward-looking sensors).

There’s a reason this sub-brand is called BMW i not BMW e: the “i” stands for innovation, and innovation has a broader remit than the flavor du jour, electromobility. This book was published in conjunction with a 2018 exhibition at BMW that ran for 18 months but it is not an exhibition catalog but a fully stand-alone treatment of the subject. The book was written by the exhibit’s curator, Andreas Braun, which means it benefits from unfettered access to all things BMW but is also fully steeped in the corporate philosophy so nothing is lost in translation. The latter part is actually quite relevant because outside journalists often struggle to reconcile corporate spin with science-based fact. There are indeed a few statements in this book that smack of the former (mostly in the context of talking about other players in the field, aka the competition) but you have to be really on the prowl for such things to take offense.

Both the exhibit and the book begin with an analysis of the status quo and its impact on the future on a global scale: where and how people will live—and how they will get around. Lots of graphs, maps, and stats here. If climate change doesn’t factor into your vocabulary, this book and indeed BMW’s concept of responsible stewardship is wasted on you. The data is from perfectly legitimate sources, such as the United Nations and German government agencies.

The basic operating principles of three types of electric and hybrid vehicles are discussed, and the big buzzword—range anxiety—is measured against real data of how people use cars. (The one caveat here is that European conditions are not really what far-roaming Americans are used to.) A key take-away: “Statistically speaking, electric vehicles could already cover almost 90% of daily journeys to the workplace and back, even if the distance involved is 100 kilometers [60 miles].”

A brief synopsis of the earliest days of electromobility, i.e. the 1830s, sets the scene for how BMW fits into this picture (1966 was the first board meeting to take it up). Obviously, the design, architecture and components of the i3 and i8 cars feature prominently but BMW i has spawned countless new, independent business areas within BMW Group, to all of which there is a behind the scenes look offered here. From fair-trade, sustainable farming to how to repurpose spent batteries, mobility in a world of dwindling resources is a so much larger topic than merely making cars run clean. There’s lots to think about here, and the large-size illustrations (the book is in landscape format) and commendably clear infographics are most appealing.

The 1972 Olympics are memorable for so many things but that BMW road-tested its first electric car is probably not a headline you remember. The verdict was that was “unsuitable for series production” anyway.