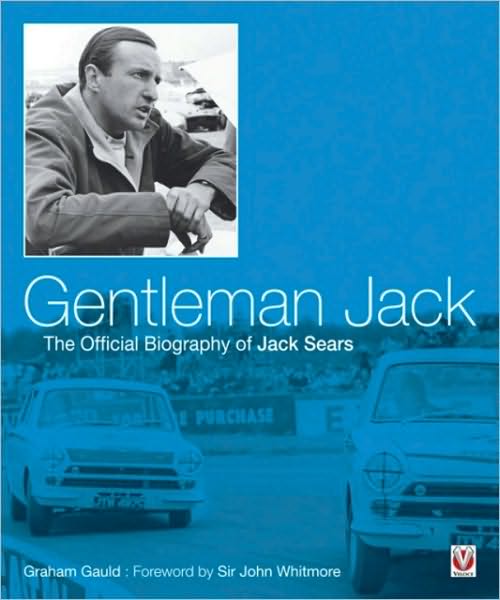 “Unfortunately, there is no room in motor racing today for the gentlemanly way of racing that Jack Sears epitomized.”

Jack Sears (b. 1930) is one of two sons of a member of a shoe manufacturing business, Stanley Sears, who had trained as an engineer. The elder Sears (b. 1903) is of course remembered for being instrumental in saving scores of irreplacable veteran cars from being recycled into much-needed raw material for the war effort. In the process he built up one of the finest car collections in Britain, and after WWII sold what was surplus to his own interests at no profit to fellow Veteran Car Club members. After purchasing his first new Rolls-Royce, P II Continental 31GX, this marque became the nucleus of his interest. He built a replica of the 1905 Light 20 car that Charles Rolls drove in the Tourist Trophy that year, using the remains of two chassis, 26350 and 40520. (This car appeared in the 1972 BBC television production Mr Rolls and Mr Royce.) Among his many delectable cars is also Bentley 8L YX5121 which had once been the fastest Bentley with a flying mile at 140.845 mph on the motorway at Jabbeke.

Cars, then, surrounded young Jack Sears who just happened to be born into a great period in British motor sport. He raced and rallied, mostly apparently for the fun of it, in historic, sports and saloon cars, with people such as Jim Clark, Graham Hill, Archie Scott-Brown, Peter Riley, Roy Salvadori, Mike Hawthorn, Tommy Sopwith, and Colin Chapman. Sears drove Austin-Healeys, Ford Galaxies and G.T. Cortinas, Ferraris, Austin A105s, Aston Martins, Jaguars, and A.C. Cobras as a private entrant and for various teams and companies. He competed with great success, although he always considered himself a farmer who went motor racing. Before speed limits were imposed on British motorways he achieved 185 mph on the M1 early one morning as part of the Cobra testing program. He retired from racing after a bad accident at Silverstone in 1965 in a Lotus 40, after which he was one of the main organizers of the Daily Express London to Sydney Marathon.

The book’s final chapter deals with his son David who also cut his teeth racing before embarking on a successful career in motorsport management. Appendices cover the Sears car collection, with good photographs and chassis numbers, although it is not made entirely clear that of Stanley Sears’ Rolls-Royce and Bentley collection, only Phantom III 3DL76 remains. Appendix 2 presents Jack Sears’ competition history 1950–1965, with dates, events, cars, notes and results even including earnings of £837/5/- for 1958.

Gauld is a respected Scottish motoring writer and photographer and, with the involvement of Sears himself and incorporating interviews with peers, competitors, and teammates augment, has produced a readable book, free of any errors apart from a few typos. It is very much an Official Biography—no salacious anecdotes or the like which would have been anathema to the always well-mannered and dapper Gentleman Jack.

It’s About That Time: Miles Davis On and Off Record »
« Hunt for the Blower Bentley