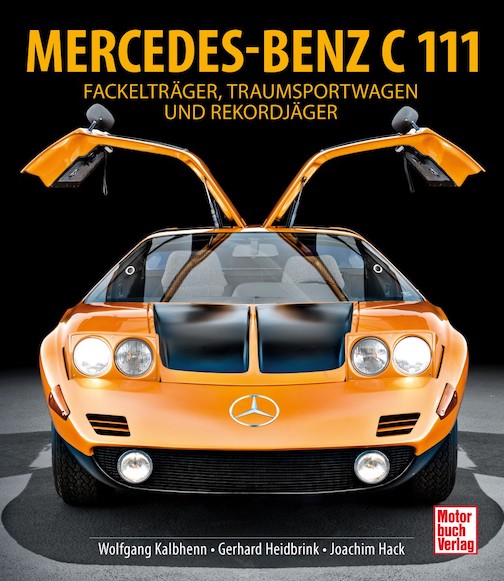 (German) A 400-page book with almost 1000 illustrations about a 1960s prototype that was never available to the public. Although a total of 42 cars were built over a 12-year period and the land speed records it established expanded the prototype concept, the car never appeared on the street or in competition. When the Mercedes Museum revived a drivable car in 2014, public interest convinced Its Classic Center to underwrite this scholarly work utilizing previously unavailable primary sources plus interviews with more than 50 participants.

Exhaustive documentation establishes the book as the definitive record of the C111. Two of the authors are company men. Kalbhenn, an engineer, worked on the project, Heidbrink spent 29 years at the Classic Center, and Hack is an automotive journalist.

The word “Fackelträger” (torch bearer) in the subtitle reflects the company’s hopes when the car debuted in 1969. It was featured as the successor to the 300SL but never filled those shoes. The book consists of three sections, all of which illustrate the complex and changing relationship between rotary power and the company’s desire to enhance their sporting image. Paul Bracq designs were wind tunnel tested as early as 1962, but the project languished until revived in 1965 when Fritz Nallinger suggested a rotary motor, since Mercedes had improved performance of the original by adding a third rotor.

The first section, “Viel Licht und viel Schatten,” (Much Light and Much Shadow) details the rise and fall of the Wankel motor not only at M-B but worldwide. Its pros and cons will be familiar to most readers, but the book details the factors that set Mercedes apart from NSU/Auto Union, Mazda, and GM. First and foremost was the need to protect M-B’s reputation for quality and reliability. The authors contend that no other car company has the exacting standards that must be met before new technology can be introduced. More than 300 motors were built and tested but consistent survival of five hours full load on a test stand or a minimum of 100,000 Km on the road proved to be elusive.

Uncertainties about the Wankel played a role in the debate about the rotor in other Mercedes models, complicating costs and benchmarks given that two-, three-, and even four-rotor models would all be required. Expansion into other car lines meant that warranty costs would have to be considered since the factory was aware that 65% of NSU’s motors in their Ro 80 model needed replacement after 18 months. Uhlenhaut was a skeptic who maintained that the Wankel could never compete with the new generation of V motors under development. He saw the C111 with Wankel as a plus for the company’s image, but development costs would not be shared, nor was it possible to agree on a number for the series: 50 units or in the thousands.

The second section, “Dream Sports Car and rolling test laboratory,” reviews the efforts to combine the performance of a supercar with the comfort of a GT. The fact that mid-engine location was considered essential was no help since Mercedes had no previous experience dealing with heat and noise separated mere inches from the passengers. The two-rotor Wankel was compact but, as multiple illustrations show, the four-rotor with noise suppression manifolds plus US-required air conditioning and sound systems was less so. The need for luggage space led to side mounted fuel tanks and the heat generated by the four-rotor version required extensive ducting and plumbing. All good, but this parallel track further delayed finalization of a design suitable for series production. Even though the original had progressed to crash testing, the company felt a redesign was needed. What might have been “correctable” in 1970 became less so after the 1973 oil crisis, which led to budget restrictions that effectively gutted the program.

The authors confirm the well-worn Wankel narrative of poor gas mileage, high oil consumption, and emissions colliding with increasing US concern about safety and the environment, but considered uncertain reliability to be the single most important factor in the C111 story. They also cite the limited market for pure two-seaters even when the engine isn’t next to your ear and point to the fact that there were seven-piston versions, four V-8s and three turbo diesels, suggesting that the failure to launch was not solely the result of Wankel problems.

I share the authors’ convictions that the C111 represents a worthy milestone in automotive history, admittedly because of its role in the rise and fall of the Wankel. The Classic Center deserves credit for publishing what would have been otherwise lost in the factory archives.

Won the 2022 Nicolas‐Joseph Cugnot Award in the category Language other than English. As to books in English, you can still easily find used copies of Paul Frère’s fine 1981 book Mercedes-Benz C111: Experimental Cars (Edita S.A., ISBN 2 880010 095 0).

Posted Under: Automobiles, Award Winner, German, Multilingual / Not English | Author: Other | No comments yet

From Bond to Bentley and Back, Rambles Through a Motoring Life »
« Last of the Flying Clippers: The Boeing B-314 Story