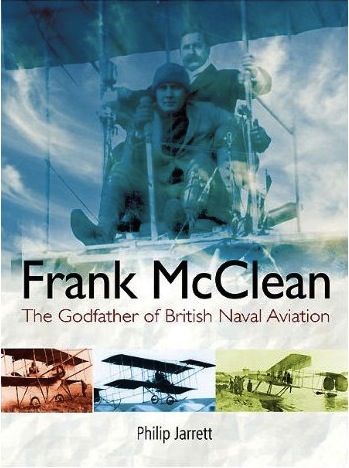 The London Times obituary called McClean (1876–1955) “the founder of naval flying” which is probably more apt than the book subtitle’s “godfather” (which is borrowed from the obit in The Aeroplane). Either way, even proper learned histories of naval aviation often enough mention this pioneer only in passing.

The things he is remembered for, the ones that made headlines and put him into the limelight, are the very ones this low-key, publicity-averse man surely thought the least deserving of history’s embrace. One such saw his name plastered all over the newspapers once more in 2012: the 100th anniversary of his August 1912 historic flight up the Thames to Westminster, passing between the upper and lower spans of Tower Bridge and passing beneath the other bridges. May not sound like much, but, hey, no one else had done it, and in 1912 aeroplanes were still an enormous novelty.

Once you read the long, long, long list of McClean’s “serious” achievements you’ll shake your head in wonderment—and not without a little embarrassment—not to have known of him already. Thankfully there are people like author Jarrett who see to it that we do not forget on whose shoulders we stand. Truth be told, Jarrett himself, although he knew of McClean and is an early-aviation specialist, hadn’t appreciated the full scope of the man’s accomplishments until he was invited to look at the Fleet Air Arm Museum where much/most McClean material is archived. If you are a reader of the British monthly Aeroplane Magazine—founded right in McClean’s time, 1911—you’ll recognize Jarrett as a regular contributor.

If you knew nothing of McClean’s background you’d conclude just from reading what he did and what he thought that he was an Englishman in Edwardian times, brimming with thoughts of Empire and the proper place of everything under the sun. Born into great wealth (mines) that was only two generations old (his Irish grandfather) he was, in the words of fellow aviation pioneer Alec Ogilvie, “prepared to spend his money freely in getting to the bottom of things which interested him and in which he could see benefit for his country.” It was a good thing for Great Britain that aeronautics was among the things that captivated him ever since going on a balloon ride in 1907 with Charles Rolls (the Rolls in Rolls-Royce). Unlike other amateurs, wealthy or not, he saw the future—and that it had a price tag. Putting his money where his mouth was, he not only bankrolled early aviation efforts but actively participated in them, becoming, for instance, the Short Brothers’ (whom he knew from ballooning) first—and unpaid—test pilot. Between 1909 and 1914 he personally acquired at least 23 aircraft (this book is the first to list them all, reconciling McClean’s own erratic records and the Short’s order book), making them available for Army and Navy pilot training.

After briefly laying out the McClean family’s background in mining and civil engineering, the book swiftly moves into balloons, gliders, and powered flight. Naturally, he met the American Wright brothers when they demonstrated their machine at Le Mans in 1908. Jarrett is firmly enough grounded in the subject matter to be able to provide sufficient technical detail to give the reader a basic understanding of operating principles, aerodynamic theory and flight behavior, all the while advancing the story through letting McClean and cohorts speak for themselves in the form of diary excerpts, quotes, or the like. The in-depth coverage ends with the 1914 Nile expedition and a few minor activities before wrapping things up with a brief 1914–1955 synopsis.

Well-captioned and -reproduced period illustrations flesh out the narrative, and there is quite an extensive Bibliography (read the introductory remarks for caveats) and a solid Index.

McClean, who had been knighted in 1926 for services to aviation, died only three weeks after the unveiling of a memorial to Pioneer Airmen at Eastchurch, one of the Royal Navy’s early airfields. His ashes were scattered there. He may not have cared if posterity remembered him—it would be our loss if we didn’t.