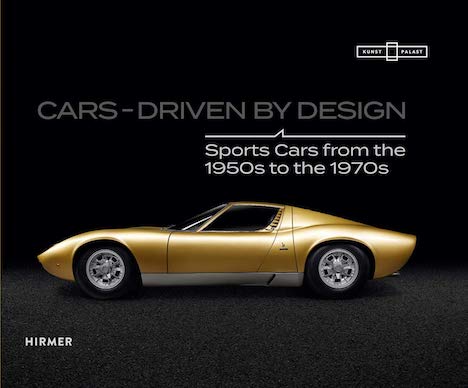 “There is an urgent need to explain sports cars to the generation born in a closed Scénic (1996) and raised in a Tiguan (2007) that is brimming over with airbags and driver-assist tools and that has internalised the automobile as belted cruise control.”

Relevant as this quote is, it needs some ‘splainin at least for American ears: that first car name goes with a Renault (the second a VW, but it’s sold under the same name here) and “belted cruise control” must mean something in German, the book’s original language.

Explaining the idea—and ideal—of the genus “sports car” is indeed something that has merit. One of the four essays (five, if you count the Preface) muses whether speed would feel fast if it weren’t accompanied by sound and vibration. Presumably it does not (and anyone who has watched the speedo needle climb in electric mode in a hybrid car would concur) which is why the museum exhibition to which this book is the catalog offered soundtracks of engine noises as part of the multimedia experience at each display stand.

That museum show took place September 2018 to February 2019 at the Kunstpalast in Düsseldorf, Germany. Known as a fine arts museum, albeit with an extensive design collection, the Kunstpalast seems an unusual venue for the first-ever show off this kind in a European art museum—until you remember that its curator since 1994 and now deputy head of collections, Barbara Til who co-wrote this book, has a reputation for connecting new dots.

The museum may have had the advantage of offering sound but the cars were spread out over two floors whereas this book has the advantage of presenting them all in one place, and in photo-friendly landscape format to boot.

The scope of any museum show, no matter how overarching its theme or goals, is limited by the exhibits it can round up. Enter co-curator/co-writer Dieter Castenow, a director of a local PR and employer branding agency (don’t ask; like the extinct sports cars of yore, it’s “a sign ‘o the times”) who once worked at the Kunstpalast. More relevant, having moved up in the world he nowadays has the means to be a player on the car collecting and rally scene himself and it is largely due to his contacts that loaners for the exhibit were procured, about half from (mostly anonymous) private hands, the other from the corporate collections of various carmakers.

With the exception of a Toyota 2000 GT, all the cars are Western European (a rhd Cobra makes the cut because it is a AC version). As an aside, one of the book’s corporate sponsors is Bentley Düsseldorf—even though there is no Bentley in the book although there could have (R and S Type Continentals of the 1950s).

The book presents 27 cars (the publisher’s press release says 25 [but then lists 27 by name], some reviews says 29 or “almost 30”…who knew counting is so hard?!) in near chronological order of production run. In other words, the actual cars chosen for the show can be from any time within their production window. Since the topic of the show is “design,” the strongest representation of an idea was sourced, cf. not the first-year Countach but a later model because of its more radical bodywork and different motor, or the Lancia Zagato version with the distinctive double-bubble roof.

Most cars are covered in 4 pages, crowd favorites such as the Lamborghini Miura get up to 8. The text is by Christopher Butt (who also did the translation and penned the mini bios of designers/engineers and coachbuilders/design studios at the back of the book), a local car design enthusiast who runs the www.auto-didakt.com website and writes for The Road Rat magazine and Octane France.

Introduced by a short section of performance/production specs and the name of the designer, the narrative is very much focused on the design language of the particular specimen, and makes clear and coherent statements. That not everyone will agree with every observation is a given, beauty being in the eye of the beholder and all…

Now, a museum catalog usually has a bit of a different flavor than your run of the mill book. It is by nature distinctly “academic,” seeking to establish context and background to the exhibits on the floor. And it uses language and thought models to pursue that goal. It’s one thing to read here that the cars are shown “decontextualized from their function” (a complicated way of saying they’re standing still, and shown as “objets” in mostly gray surroundings) but it’s quite another to suffer through “the onomatopoeic promise” of car names, the “synaesthetic properties” of sports car design, or the “sociological interpretation of certain autobody shapes.” Yes, academics are prone to wanting to parse the world that way—but no one walks into a showroom with any of this in their conscious mind, and its hard to see how this sort of language gets people’s juices flowing!

You’ve seen a thousand Porsches. You know about the Golden Ratio. Have you ever considered the two together (top left)?

The texts are by Til/Castenow, Niklas Maak (arts editor for German  newspaper Frankfurter Allgemeine Zeitung), design theorist Markus Caspers, and Paolo Tumminelli who wears too many hats to neatly summarize. Publisher Hirmer is an award-winning house for “Art books which set standards”—and frequent partner to museums in producing exhibition catalogs—so this is indeed a properly nice book. 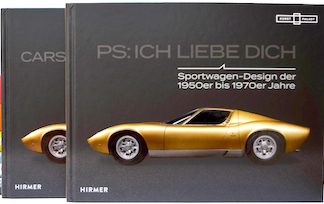 Incidentally, the title of the German edition is PS: Ich liebe Dich (PS, I Love You), a clever pun that only works in German where PS in this context doesn’t stand for postscript but for Pferdestärke = horsepower.