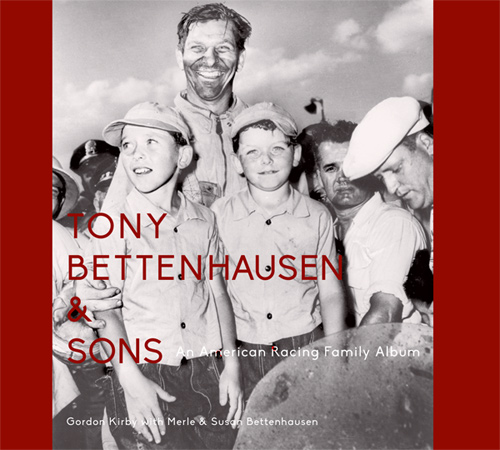 “I remember one night my father sat down with us and he was very frustrated over something. He had tears in his eyes and he looked at us and said, ‘Don’t you understand that we’re doing this for you guys?’ With my father’s leadership we became a team and a corporation when we were high school kids.”

Tears from arch disciplinarian “Tunney Bettenhausen” (after heavyweight boxing champion Gene Tunney and only later changed to Tony) are hard to picture. He ruled his roost—including wife Valerie, from whom he got divorced only to marry her a second time two years later—with firm ideas about what’s what; in fact you could pluck a quote from pretty much any page of this book and it would preach the same sermon: do it right or not at all, discipline, courage, honesty, resilience.

Whether nature (i.e. innate ability) or nurture (i.e. the qualities above plus, of course, growing up on race tracks), the fact is that all his three sons became racers, like dad, and successful, like dad. When Tony Sr. (1916–1961) took up racing in 1937 it clearly was innate ability, fueled by an all-around wild streak but leavened with a willingness to take advice from mentors and to learn by doing and watching.

Two generations do make a dynasty; that there isn’t another one is one of the reasons the Bettenhausens’ story is a bit different from others: only middle son Merle (the kid on the right on the book cover) survived his racing days, and even he sacrificed an arm to the track (1972) and suffered severe burns to his face. He and sister Sue collaborated with author Kirby on this fine book, which means this new tribute can cover quite a bit of new ground since the last biography, Carl Hungness’ GO! The Bettenhausen Story, The Race Against a Dream from 1982 which is still easily found and definitely worth seeking out.

Each of the four drivers is covered in his own chapter which begins with biographical notes and reminiscences, is followed by a lengthy photo section, and concludes with a racing record in table form. The meat of the story is conveyed mainly in the thoroughly captioned photos, many of which new to the printed record (color photos appear as early as 1954).

American open wheel racing is a quite specific affair in regards to its industry and protagonists. As volume 4 in this publisher’s “American Racing” series the book adds much colorful and relatable personal history and consolidates race details and results.

Vol. 5 in the series, also by Kirby, will be the rather more expensive Penske’s Maestro: Karl Kainhofer and the History of Penske Racing.