What will Happen when Most of Us Choose Automated Vehicles 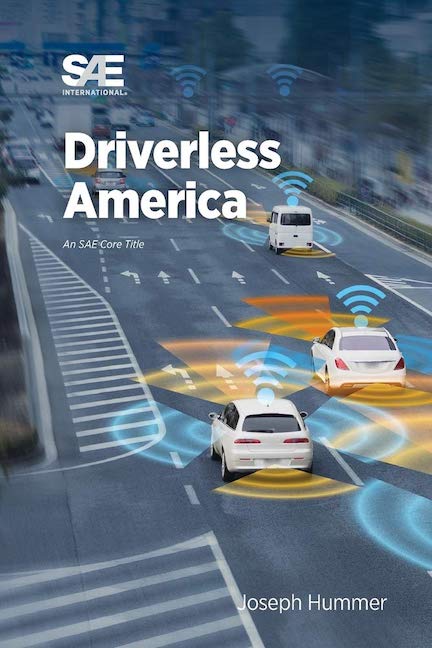 Driverless America is one man postulating about What will Happen when Most of Us Choose Automated Vehicles. As Joseph Hummer sees it that transition will take at least 30 years from whenever automated self-driving vehicles are widely available and, of equal importance, the infrastructure they’ll require is fully in place. Thus some reading this are unlikely to live to see that predominately autonomous driverless day.

What is certain is the civil engineer author is an academician with numerous published papers as author or co-author to his credit and he has advised any number of master’s- and doctorate-degree seekers on their projects and papers. All that he has had published is in a well-documented footnoted format; this book is no exception. Of interest with this one is that of the 96 chapter endnote sources cited only two are print—all others are internet sources.

Hummer has neatly and logically organized his book (argument?) into segments of how automated vehicles becoming dominant will (might?) affect various types of individuals, institution, and a myriad of aspects of life and living.

The narrative and predictions are all very positive and upbeat until at about the book’s midpoint in a chapter titled “Transportation” some of the likely less attractive realities of automated vehicles are addressed. It opens with: “The auto industry will end up looking like the phone . . . cable . . . personal computer . . . airlines and any number of other areas of the economy in which a few giants battle it out. . . . It is likely the Federal government will have to step in . . . to ensure that . . . consumers are not left at the mercy of monopoly operators.”

Then there’s this in the chapter titled “Institutions” which addresses automated travel’s effects on law enforcement (unclear how policing methods will evolve), the legal profession and the courts (status quo as current day just slightly different details), health care (increases in cost of life-ending illness with fewer dying at younger ages in car crashes), and education (pluses and minuses at all levels). One scenario posed in the sixth chapter to which no solution of any sort is postulated is: “If [when? –ed] the power fails during the middle of the day and the car I order to take me home from work cannot do so because it cannot get recharged, am I going to be stuck at the office all night?” It’s all about the reliability of the infrastructure—the electric grid which is very much a concern in 2021, Imagine what it might be like in the future without marked changes, improvements, and security issues being addressed.

As the book goes on, it is very clear that a society dependent upon automated transportation looses its self-sufficiency in some marked and major ways to “More Central Authority” as a segment near the end of the book so titled lines out.

Hummer wrote the book in hopes of “sparking conversation that turns into [more and deeper] research . . . that mitigates as many ill effects as possible” of the coming autonomous-driving America that he foresees. His thoughts are organized into segments such as People, Land Use, Environment, and Institutions; each discussing effects of a predominance of autonomous vehicles.

It’s a well-written “consider this” that invites anyone to read and then join the conversation.

What will Happen when Most of Us Choose Automated Vehicles, an SAE Deep Dive

Posted Under: Automobiles, Technology | Author: Helen Hutchings | No comments yet

Porsche 356: Made by Reutter »
« Forgotten Motoring, A Miscellany on the Open Road