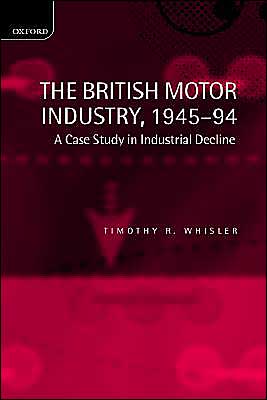 Timothy Whisler is an economist/historian (Saint Francis College, Pennsylvania with a PhD from the venerable London School of Economics) and offers here a new angle on an otherwise well explored subject.

In and of itself this is an eminently readable, well-researched book and if one wanted to read only one single book about the British motor industry, this one doesn’t lead astray. Readers with a background in management or economics will take particular note because Whisler traces the decline to the economic theories of path dependency and lock-in. This subject is, of necessity, complex—both for the author and the reader.

Just a few months after his book came out in 1999, BMW’s announcement that it would divest itself of its Rover subsidiary added yet another wrinkle to a story that doesn’t have much further to go—there is no more British motor industry left. Lots more has happened in the years since, but Britain still doesn’t have a full-blown large-scale mass auto production even while all sorts of cottage industries and small-scale boutique car makers thrive here more than elsewhere.

The concept of lock-in is usually applied to technology and not, as here, to culture. Whisler’s main argument is that, beginning in the days of Morris, a certain type of management strategy entrenched itself and was perpetuated by subsequent generations of managers. By its ethos and vocabulary it painted itself into an intellectual corner from which it misread, misunderstood, and overlooked changes in the market condition.

Managerial arrogance and ignorance (built them and they will come!) are described in detailed case studies; the focus is on the pre-1975 era. Analyzed are design, R&D, quality, production methods, and marketing. The wealth of argument adds to our understanding of the situation but the core question: “Why did the management culture not respond to changing signals?” is not fully resolved.

The reader who is already familiar with the topic will have to provide missing links occasionally. For instance, Whisler addresses only in passing the role of government, financial markets, changes in the regulatory environment, and shareholders. Given Whisler’s significant contributions to the topic here and elsewhere this is surely not an oversight on his part but a conscious choice as to what can and cannot fit into this book.

Very much a missing piece to the puzzle, but it is an academic text and the casual reader will have to labor. Each chapter ends with a Conclusion. Thoroughly footnoted text, comprehensive Bibliography, good Index.