Rallying in a Royal Rolls-Royce 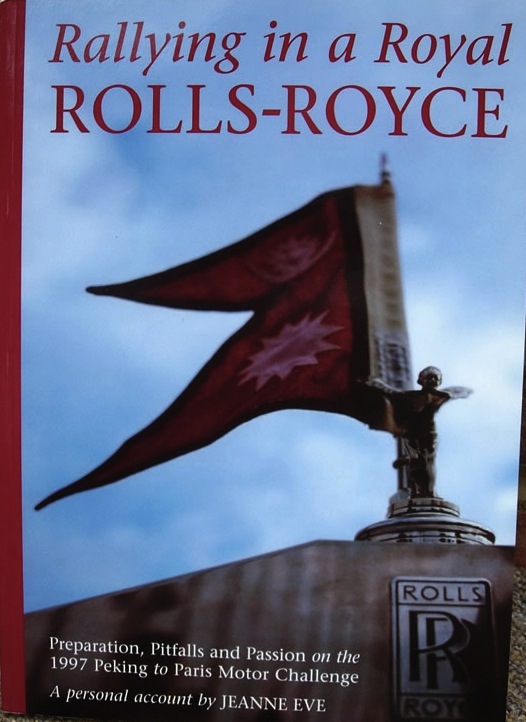 Preparations, Pitfalls and Passion on the 1997 Peking to Paris Motor Challenge

If you are a Rolls-Royce enthusiast who pours through books seeking information on compression ratios and piston stroke, then this one may not be your cup of tea. However, if you have a pulse, if you have ever felt the call of the open road, and you don’t treat your Rolls-Royce or Bentley like a trailer queen or museum piece, then you won’t want to miss this book.

Jeanne Eve takes the reader through the trials, tribulations, and elations of her and husband John Matheson’s journey from their home in New South Wales, Australia to Peking and on to Paris in their 1967 Rolls-Royce Phantom V. Jeanne structures her book into three parts. In “Prelude to an Adventure” she describes their passion for traveling and tells us about the automobiles in their lives, including the purchase of “Lizzie’s Taxi,” the Phantom V limousine of this story. The reader feels their excitement as they prepare themselves and the Phantom for the rally, and we feel their angst as they draw up their last wills and testaments with the understanding that this undertaking is dangerous and they might not see their young children again.

Yes, death can and does occur on road rallies as we learn elsewhere in the book. “Jeanne’s Diary” is a colorful, graphic depiction of the daily events as the journey begins in Peking, September 6 to their arrival in Paris, October 18, 1997. Through Jeanne’s eyes, we see contrasting landscapes from the beautiful Himalayas to the barren deserts of Iran; from the dull grey clothes of the Chinese to the bright multi-colored trucks of India. We smell the soiled mattresses and feel the fleabites in the “hotel” in Golmud, China (tour book notes: “from here to hell is only a local call.”). We share the warmth of the friendships and camaraderie among the rally participants. Jeanne does not hold anything back from the reader, including her irritation with the rally organizers and the endless bureaucracies they faced throughout Asia. “Failure to proceed” is experienced, and this reviewer felt the anger and pain with each stone thrown at Lizzie’s Taxi as they drove through Iran.

An account of the original 1907 rally is given in the first appendix. The second describes the modifications to the P V and a list of spare parts. There is an inventory of their medical kit, clothing, and camping equipment for those of you who are interested in participating in the next exotic road rally. “As a Matter of Record,” the third appendix, provides several lists of participants and their cars, and a listing of “Final Positions.”

The color photographs are wonderful and complement “Jeanne’s Diary.” However, there are too few and they do not capture the entire rally. A few annoying typos are easily forgiven as this book is a self-published labor of love (the next edition will fix them). The reader soon learns the words are straight from Jeanne’s heart, not from a professional wordsmith.

This book is a “real page turner” (quoting the reviewer’s wife and fellow Rolls-Royce and Bentley enthusiast). But does it inspire one to participate in a rally where one’s life and financial stamina are at risk? No, not at this point in life for this reviewer. With two children and a large mortgage, I am happy to motor closer to home. Jeanne and John paid AUS $33,000 entry fee just to be placed on the Priority list; these rallies are not inexpensive, and this is only the tip of the financial iceberg. If you are considering a rally of this nature, the book may sway you one way or the other. However, thanks to Jeanne Eve and John Matheson, we can experience their journey vicariously without leaving the comfort of our living rooms. This was their first one and it certainly didn’t deter them from more rallying.

Two historical notes: the car in question is chassis no. 5VF159, one of four or five Vice Regal Phantoms V once owned by the Australian government. It is described as the car in which Sir John Kerr drove away after having sacked the Prime Minister in 1975 but, in reality, it was the PM who drove away—in his Ford. Also, the US embassy bombings happened in Kenya and Tanzania, not Nigeria.

People who like words should say the title and subtitle out loud—a couple of times!

Posted Under: Automobiles, British | Author: Other | Comments not open.
Hot Rod (Perry) »
« A Reliable Car and a Woman Who Knows It: The First Coast-to-Coast Auto Trips by Women, 1899–1916