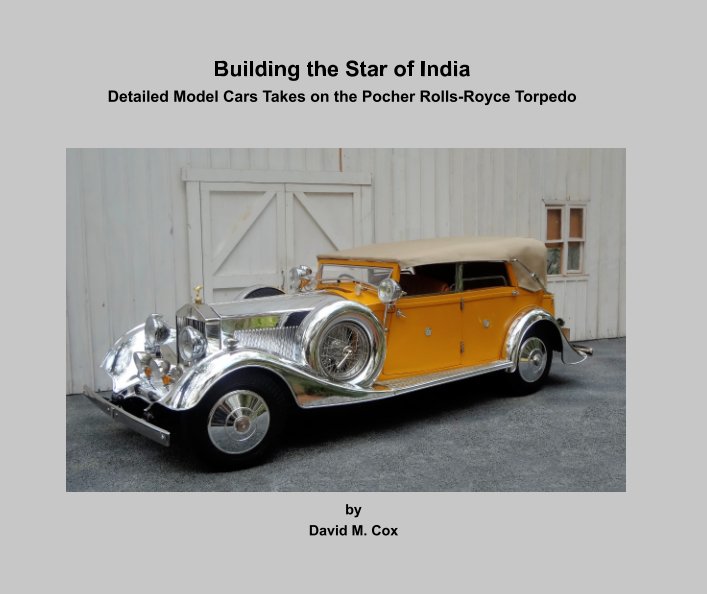 The Star of India is a famous Rolls-Royce, a 1934 Phantom II with Thrupp & Maberly allweather body built to the order of an Indian prince. Rolls-Royce folk know the car by its chassis number, 188PY.

While unrelated to this book, it’s worth knowing that the car’s already famous history became more famous when in recent years a grandson of the original owner bought the car at auction from its European owner and repatriated it to India where it was reintroduced to the public in 2013. 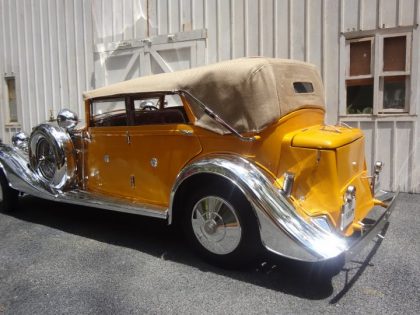 The grammar of the subtitle will take a moment to parse unless you already know that “Detailed Model Cars” are not regular words in a sentence but the name of the company that specializes in assembling Pocher kits and manufacturing (and selling) custom, cast parts to either improve upon the plastic Pocher parts or to facilitate the addition of bits that are not part of the stock kits. 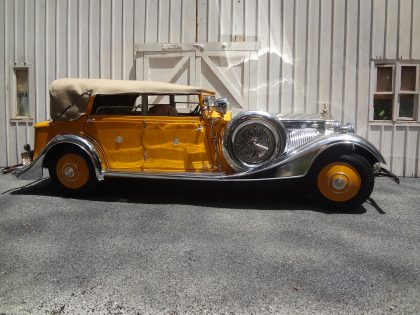 If the title of the book or the name of the author sound familiar it is because in 2002 Cox wrote (with then business partner Marvin Meit who still runs the original company) a much shorter tome, Building the Pocher Rolls-Royce, dealing with the same car but in a different manner. The books don’t merely contain practical tips on construction, techniques, and tools to augment the not always self-explanatory albeit voluminous instructions that the manufacturer includes with the kit but also cover the key thing that constitute Cox’s day job: modifications with parts of his own design and manufacture.

Pocher was founded in Italy in 1951 by goldsmith Arnaldo Pocher (b. 1911) who had become interested in modeling after WWII, as one of two companies offering parts for miniature railroads. Their first model kit car, a highly detailed Fiat F2 in the unusually large scale of 1:8 that had won the 1907 French GP was such a hit at its introduction at the 1966 International Toy Fair in Milan that the company specialized in ever more refined 1:8 car models. Over time, they would number around 3000 parts, many of which fully functional, and weigh up to 16 pounds. Building one requires patience, dexterity, and an ability to think like an Italian . . . the instructions were voluminous but not exactly unambiguously clear.

Enter the David Cox/Marvin Meit company Model Motorcars Ltd. and specifically Cox’s current firm Detailed Model Cars that he started in 2005 and which did the build of 188PY. The book, incidentally, contains no information on the different things the two firms do (check out their websites) nor the full backstory to this particular build which would have made a lovely, heartwarming sidebar. The reason for this lack of a far-reaching approach is that the original intent of this material is to offer what Cox calls a “build journal” to the person commissioning the job—and that person would obviously know their own story and that of the kit, and Cox’s.

The purpose of the build journal is, initially, to serve as a progress report. This build, for instance, took a year. Another purpose of a photographic record is to be able to see items that may no longer remain visible once they are fully assembled and possibly enclosed by other structures. Unlike the real car, it is not practical to keep tearing the model apart just to look at bits so the build journal offers a “nonsurgical” alternative. And remember, a finished model is quite heavy. 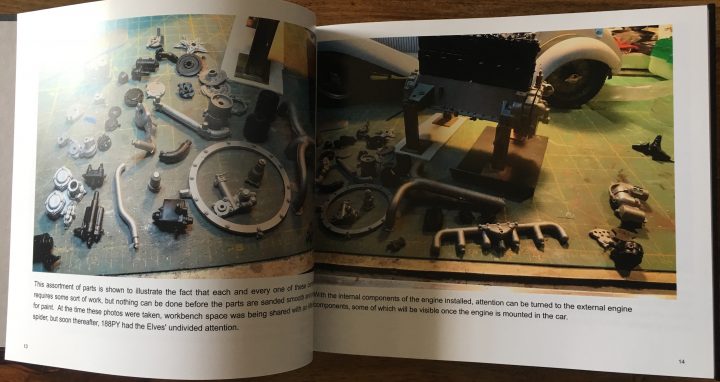 The “build journals” usually run 300 pages so even this new book, at almost three times the size of the 2002 one, is quite abbreviated. The book is divided into chapters on engine, chassis and coachwork, bookended by an introduction and a 30-page photo gallery of the finished model that includes a few pages of photos of the real car as it appeared prior to 2002. 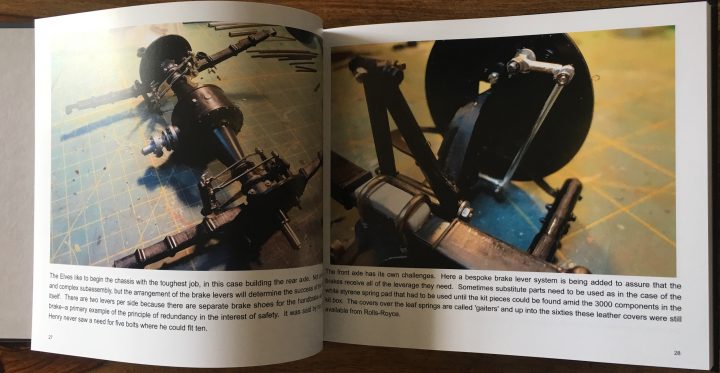 If you’ve ever built a 1:8 Pocher kit, you know that some of these parts, despite all their realism, could stand improving. Or, if you wanted to model one specific car, you’d need to make or find custom parts or add functionality (working lights, folding soft top etc.) that go beyond the stock kit. And, while 1:8 is plenty big, the kit designers knowingly made certain compromises or adjustments that affect the scale and the spatial relationships. In this case, the stance of the model and specifically the unbecoming high ground clearance were off and required serious tweaking by Cox. In addition, he improved upon certain parts, such as sleeving holes so that threaded bolts have something to bite into, making the top foldable, creating cast pieces to replace plastic ones, and scratch-building certain parts not included in the kit at all such as the shotguns or the cardboard cartridge boxes. But even Cox has to make certain compromises because the scale simply does not always allow true-to-life treatments such as having to paint the lining of the tool tray (the tools are lifted from an Alfa kit) instead of using cloth, or being forced to use actual, real wire at 1:1 size (which obviously then has to be routed in places that don’t match the full-size car) to wire up the functioning 20-odd lights on the model including the glowing eyes of the elephants in the division.

Those people who are seriously thinking about building a kit may well be frustrated that the book glosses over certain aspects that will present insurmountable obstacles to anyone who doesn’t have, as Cox does, a basement full of spares from other models or multiple versions of the same model to cannibalize (cracked frame rails in this case) or, if all else fails, can make their own from scratch.

Kits like this one were made from the 1970s through the 1990s (Pocher these days is part of Hornby); you can easily find unbuilt or abandoned and botched kits on eBay but realize that many of the plastic parts will have become brittle by now. Or, keep it simple and have DCM built and customize your kit. Plan on writing a sizeable check!

Posted Under: Automobiles, British, Other Genres | Author: Sabu Advani | No comments yet