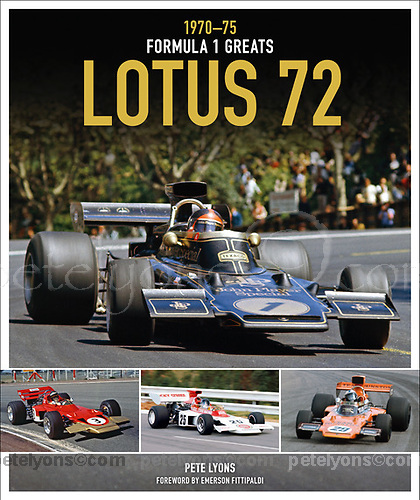 “We must deal here with something beyond stories of racing machines and motor races. Its emotional spikes and troughs make this ‘sport’ sharply abrasive, but the entire decade of the 1970s seemed to scrape blood from our souls.”

To start with a quote that doesn’t say a lot about the specific subject may seem odd but it is intended to say something about the author.

The lens through which Lyons sees the world is not that of the historian or the engineer nor even the photographer that he is, nor even a mere mechanistic composite of all of the above. Anyone could have expressed the sentiment at the core of that quote any number of ways, but “scraping blood from our souls” is a stringing together of words that typifies the emotional register that informs his work. Come to think of it, if you’re not already familiar with his style, start this book on the last page to get into the skin of young Lyons (b. 1940) standing next to the brand-new 1973 Corvette he had shipped to Europe to follow the GP circuit as a journo for AutoWeek and Autosport.

The book is published just ahead of the 50th birthday of the Lotus 72 in 2020. Were it not for Lyons’ name on the cover one might wonder what could possibly be added to the body of knowledge that has not already been unearthed by the likes of such pillars of the community as a Doug Nye or Michael Oliver. 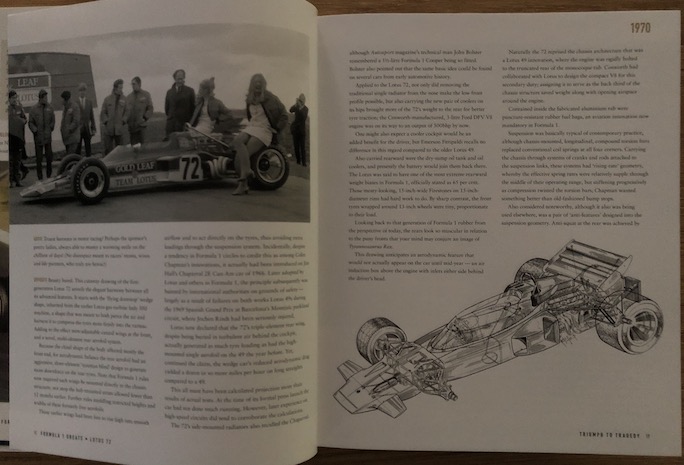 If it is news to you that the Lotus 72 was an exceptionally distinguished and competent racecar, this book gives you all the reasons why—without glossing over its shaky start and assorted warts. As a fixture on the GP circuit Lyons has of course a direct connection to the people behind and events surrounding this car, and therefore many sources. Moreover, unlike a words-only journalist, an up-close photographer, provided he is not just a mere picture-snapper, is both blessed with and burdened by a different degree of relationship with his subjects. There are, of course, heaps of documentary-type race action photos here but it is the candids and behind-the-scenes imagery that add big flavor. 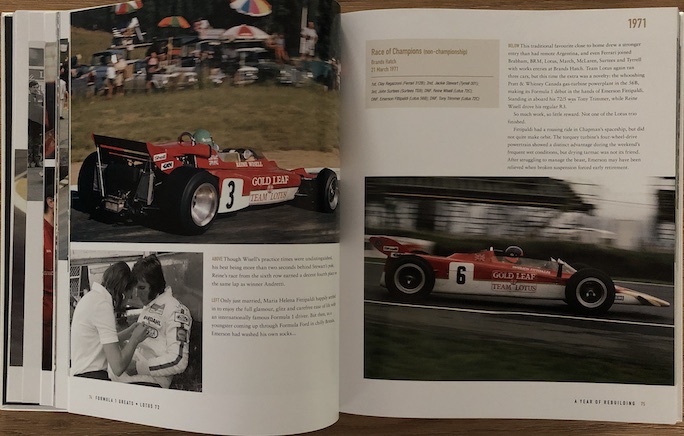 The book is divided into six chapters, each covering one year of the 72’s run, 1970–1976. Each chapter begins with a 2-page overview and then discusses each race introduced by a uniform data bloc of basic specs: location, dates, top 3 finishers, and Lotus finishers for the remaining positions. The photos are suitably placed and so extensively captioned that they advance the narrative almost more than the main text. The 55,000-odd words are clever, lucid, and the rich detail is probably only appreciated by those who know how hard it is to make every word count. Obviously, the predecessor model, the 49, is discussed, not least as it was used concurrently with the 72 for a short while. 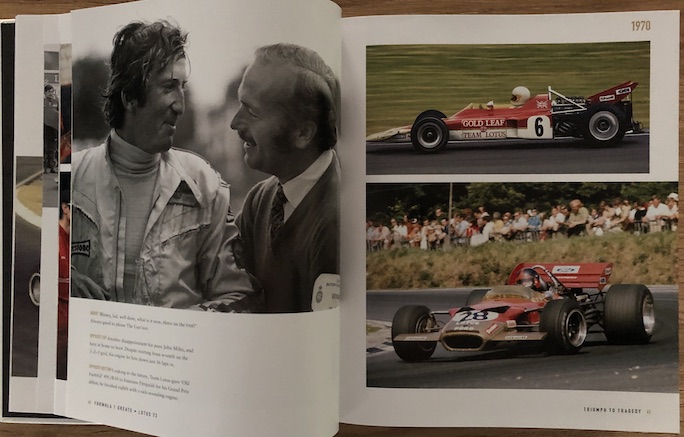 As the first installment in this publisher’s new “Formula 1 Greats” series the book sets a high bar. Rather uncommon for a European publication there is a properly good Index. And while it is hardly worth mentioning, the price is pretty much the sweet spot for this sort of thing. 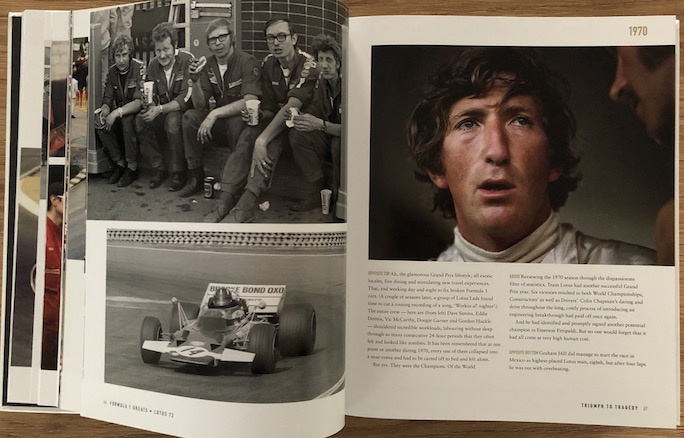 “Foreword by Emerson Fittipaldi”—well, that doesn’t happen every day. Now 73 years old and “semi-retired” the Brazilian made his F1 debut with Team Lotus at the 1970 British Grand Prix. He raced the car for four years and won his first World Championship in it, 1972. The Foreword is clearly written by someone with a passion for this car and for racing, and while it does not say anything at all about this book, it can surely be inferred that Emmo thinks it worthy because he considered the 72 the best car he ever drove and therefore would hardly lend his name to a sub-par effort. 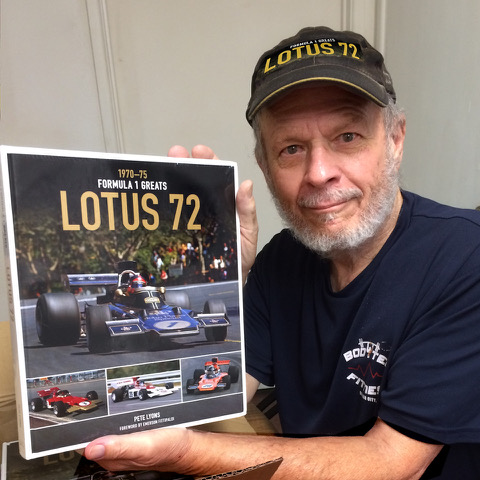 Ah the smell of fresh ink in the morning. Lyons with the first batch, fresh off the press. If only he sold those fancy hats too….

To return to the opening quote once more: words simply fail to convey the tragedy of those years: since 1966 one racer had died in every single year, and 1970 saw first Piers Courage perish and then Jochen Rindt (on a Lotus no less) who was “crowned” 1970 World Champion posthumously. You wouldn’t, shouldn’t want a book that just rattles off stats and specs; you want this book.

Autographed/inscribed copies are available from the author direct.

The Other Bentley Boys »
« Second to One: All But For Indy