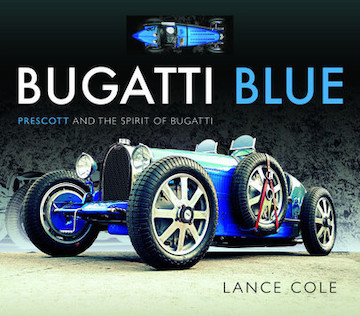 “Although it is sometimes said that Prescott is about cars—principally Bugattis, the reality is that Prescott is about people, as well as their cars. Prescott is home to classic Bugatti metal, but also to Edwardian and 1920s–30s mechanical magic of vintage sporting character and their clan of owners. There is a definite aura at Prescott, a real atmosphere, one that is tangible and, on occasions, of real emotion.”

Every person in the world with motoring interests seems to know Goodwood, but Prescott? This storied hill climb in southwestern England is a much more low-key affair, which is exactly what the people who love it want.

Elsewhere, opines author Cole who has attended events here for decades and considers it an addiction, “money and egos run riot” but at Prescott street cred is not measured by the size of your bank account but your love of vintage sports cars—not as trailer queens but flung about with abandon over hill and dale, mud-splattered, doing what they were built for. The book is meant to capture that atmosphere and that camaraderie, and it does it, possibly too well as is evident in the occasional use of only first names or the sort of insider geekery that is bound to make those to whom this is not their daily bread feel a bit like party crashers.

Even so, with over 200 photos on about as many pages, who cares if old Angus so-and-so-whom-you-have-never-met is shown four times in a row? Come to think of it, pretty much all the names you’d recognize from racing back in the early days (one Stirling Moss cut his teeth here, learning the smooth driving style without which Prescott, literally, is a waste of time) make an appearance and there’s a nice section of period photos going back to the 1930s. There’s even an Index so you can see right away that this is a plenty big story. 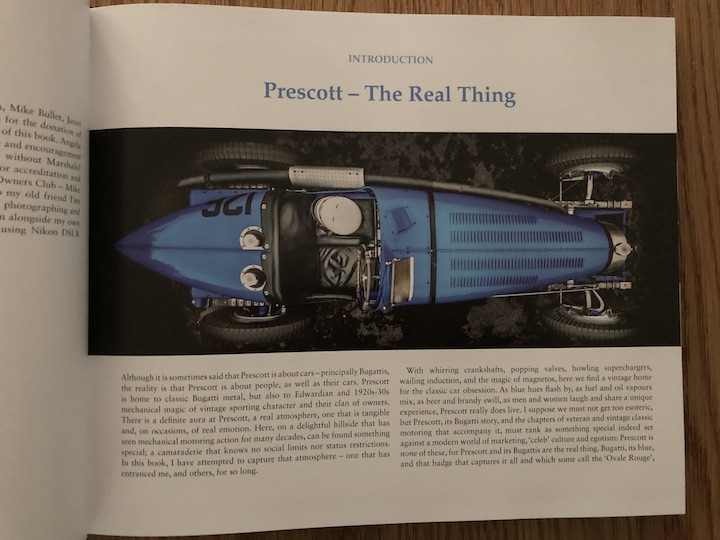 The Brits do take an entirely different tack to how they use their often pricy and rare vintage iron, and hill climbs and club racing are on a totally different order than in the US. And while Prescott is, of course, not alone in this it is alone in having been the Bugatti Owners Club’s home base for now 80 of its 90 years. The Bugatti Trust is situated here too.

The book in fact starts with an exploration of why the British, who had no shortage of homegrown competitive sports and sporting cars, so embraced Bugatti. There are no really compelling answers offered but whatever the reason, Ettore Bugatti recognized it and became a patron of the BOC and in 1939 even gifted a Type 51. Any member with £5 to burn could run it up the hill and not just as a leisure drive but in competition. Given that WWII was about to break out, this really didn’t happen a lot but it goes to show that Prescott is indeed “the altar of British Bugatti enthusiasm.”

If this leaves you cold, because Bugs are just not your thing, realize that the Vintage Sports-Car Club mounts many events here and draws any number of other marques so there’s plenty to tickle anyone’s fancy in these pages.

And speaking of fancy . . . unlike the vast majority of this publisher’s books this one is in large landscape format, awash in color. Reviewing a Pen & Sword book is usually a bittersweet affair: the books are almost always useful and worthy—but they are physically small, with commensurately small images which are often only b/w. Sigh.

With a dozen books to his name and being himself a trained designer, photographer and illustrator, Cole was obviously able to make a case for this homage to Prescott getting a treatment befitting its subject. All the aforementioned organizations rendered assistance in supplying and vetting information for the book.

Most of the modern photos are by Cole and one of his colleagues (Tim Reed). The focus in on pre-1939 cars and it really is quite staggering to see even the parking lots overflowing with vintage machinery that people just took out for a casual Sunday drive! From Anzanis to Bedelias, Delages, the “Beast of Turin” Fiat, or a chain-drive Mercedes . . . this book will surely put Prescott, especially the “jewel in the crown” event each August, on your bucket list. (There’s even a driver’s school with on-track instruction—bring your everyday road car and £220 for a day-long treat.)

How to Build a Car »
« Schlumpf