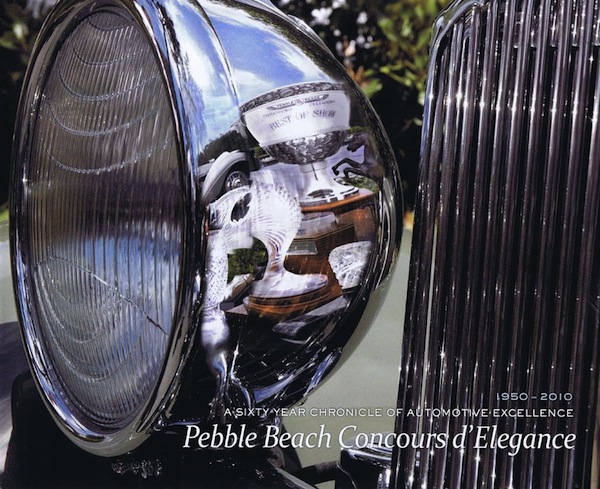 France played such a dominant role in the pioneering days of the automobile that it is no wonder that it was again the French who hit upon the idea of showcasing beautiful cars alongside another product group France dominated: couture.

Over time, this concept of a “competition of elegance” combining cars and fashion lost traction and today’s concours is really only about cars. Many A-list events all over the world crowd the calendar but the Pebble Beach concours is, still, the pinnacle event. Today’s posh affair has nothing much in common with its modest beginnings more than 60 years ago. Telling that story, year-by-year, car-by-car, entrant-by-entrant, is the thrust of this two-volume work.

Conceptually, this book is a companion to the one-volume work Pebble Beach Concours d’Elegance, Celebrating Fifty Years of Automotive Style 1950–2000 compiled by automobile historian Beverly Rae Kimes (who also wrote a retrospective of the show) and featuring contributions from various noted automobile enthusiasts. The book also listed all the best of show, class, and special award winners, as well as the names of the officials connected to the show. This new work provides a lot more data and is therefore significantly larger (and expensive) but omits all the storytelling. Accordingly, it has no “authors” per se, but several editors/data wranglers (Editor-in-Chief: Katee Leach; Managing Editor: Kandace Hawkinson; Photo Editor: Nic Waller; Text Editors: Chris Bock, Paul Hageman; Chief Copyeditor & Proofreader: Laurel Leigh).

This two-volume set is available in two versions. Both are printed on 80 pound paper, have ribbon markers, are the same size (12¾ x 10½˝), and come slipcased: the standard edition in cloth is $500 and the deluxe edition in leather is $1000. The set is available by advance order only (delivered in the spring of 2011) and its particular number is recorded by hand on the last page (this review is based on copy #304).

Volume 1 starts with a one-page introduction and overview by Sandra Button, Chairman of the Pebble Beach Concours d’Elegance, immediately followed by the car entries by year, i.e., show-by-show. It may be interesting to note that in its first year there were only 31 cars: 12 MGs, 9 prewar cars, and 10 postwar cars; a 1950 Edwards R-26 special sport roadster took Best of Show. Three of the listed classes are annotated with a footnote explaining that the data was reconstructed based on the awards issued, the same applies to the second year where the classes are unknown. In other words, it took a while for the concours to not only hit its stride but come to the realization that it might be around for a while and better attend to its record-keeping. The point here is that there’s a clear and honest representation for the reader.

The data points for each car listed are: year, marque, model, coachbuilder, style, owners, city/state/country, special awards and class awards. The coverage ends in 2010; it is not clear how/if the data for subsequent years will be made available on a continuous basis. Vol. 1 ends with pictures of the Lorin Tryon Trophy winners (Tyron was co-chair for nearly three decades).

Volume 2 both reshuffles and adds to the data presented in volume 1: first, car entries by marque, then by entrants. This is useful because it quickly shows which marques tend to appear the most and who has shown what cars. The data points are a little different than in volume 1 and here present marque, year, model, coachbuilder, style, chassis number, exhibit year, car class, owners and awards.

The inclusion of the chassis number is very interesting and of supreme importance to the serious collector and scholar. (Still today the chassis number is not listed on the actual placards on the show field!) The car enthusiast world has three basic institutions: the sales/auction markets, clubs/museums, and car shows. Each of these plays a role in establishing the pedigree of a car (ownership, competition, or show history) and its value. The chassis number—unless tampered with—is often the only way to trace a car’s movements through time and to distinguish one from another. (It’s a nice problem to have but a problem nonetheless: if one owner has identical cars—year, type, coachwork, maybe even color—how do you know which car you’re looking at? Chassis number!) So, given the importance of this unique number it is frustrating that a great many cars are listed in the book without it

The last extensive section in volume 2 is sorted by entrants’ names, showing all the cars that they have shown over the years. Finally, there is a listing of judges by year. Given that the entire work is an index of sorts, one is not included or needed.

This set is likely to be most attractive to those who have shown a car at the Pebble Beach Concours d’Elegance and the ardent automotive historian or fan of the show. It is a narrow subject, but richly and beautifully presented, and would be enjoyed and treasured by any automobile enthusiast.

Amilcar »
« The Competition Bicycle: The Craftsmanship of Speed (Rizzoli ed.)