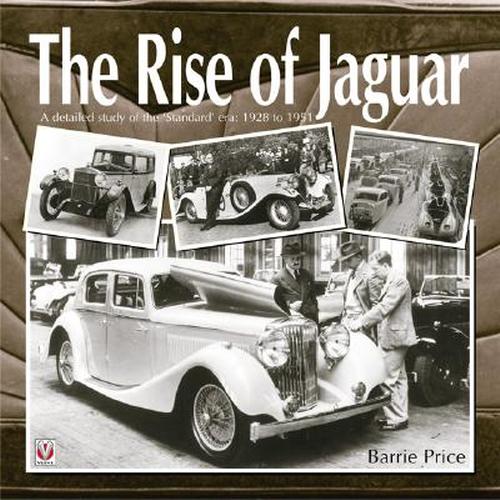 Jaguar is certainly on the rise today, with their new, 2010 crop of XJ models (in six variants) being hailed as landmark cars and possibly the best ones the company ever built. A far cry from the fragile, eccentric original XJ, and, given the firm’s ups and downs, not at all a development one could have expected with certainty. But that is not “the rise” this book alludes to. Rather, it is the period from 1928 to 1950 in which the firm solidified its reputation and also articulated what would become the marque’s lasting “character.”

In fact, the first sentence on the flap of the book jacket is a lament that “this era of the Jaguar company’s history tends to be a ‘Cinderella’ period, often glossed over by historians more interested in the ‘XK era.’”

“The fact that growth took place right from the start, during the worst economic recession ever known, and with a car which did not possess any engineering features of note, was an astonishing performance.”

An important time it was and not just for Jaguar, and Price’s knowledge of other marques at that time gives his appraisal particular weight. You may, in fact, recognize Price’s name as that of the author of several excellent Bugatti books. He was co-founder and chairman of the Bugatti Trust and has been involved with “Bugs” all his life. He also published, albeit sparingly, on two other marques with which he had professional involvement: as proprietor of the well-known Rolls-Royce service and repair facility A.B. Price Ltd. he was a founder of the Rolls-Royce and Bentley Specialist’s Association, and, quite uniquely, has owned since 1962 the assets of Lea-Francis Cars. This wide field of reference allows him to apply meaningful comparisons to Jaguar’s accomplishments and also makes the book relevant to those readers who are not Jaguar specialists but have a general interest in British cars and automobile history of that time.

The jacket also presents this book as “the first book dedicated to Jaguar’s formative years, and the company’s evolution from SS, through SS Jaguar to Jaguar” but it is probably more accurate to say that it introduces new material on the formation of SS with chassis from Austin and engines from Standard and that it very likely is the first to conduct an in-depth survey of technical and manufacturing issues to explain why this firm prospered when so many of its better positioned competitors failed. Price attributes the success to key business decisions young William Lyons made early on, such as relying solely on one large local manufacturer and lowering his manufacturing cost by introducing batch production and assembly of various components.

The actual founding of the company in 1922 is summarized only briefly and the story begins in earnest with the firm’s move to Coventry in 1928, describing methods of manufacture and evolution of models, from the early Swallow-bodied Standards, Swifts, Wolseleys and Fiats to the in-house-designed cars and ending with the Mark V. Reference is made especially to Standard, MG, and Triumph products. The final chapter gives driving impressions of various SS models in modern-day traffic. This is the one chapter in which the photos have nothing to do with the text. They are of company and industry officials and probably didn’t fit anywhere else. The period photos elsewhere are most fitting, showing cars being built and in use, also various components, and there are various maps and schematics (SS100 chassis, 1946 heating system). All are well captioned (including credits) and reproduced, and many are large and new to the record. The shop floor photos in particular are illuminating for anyone with an interest in industrialization.

The first of eight Appendices contains a fascinating and probably not widely known string of correspondence 1936–39 between Lyons and Rolls-Royce along with internal R-R memoranda pertaining to R-R being so intrigued by the “meteoric success of SS Cars” (and wondered about its potential of becoming a rival to their own Bentley car which brand they had acquired in 1931) that they purchased a Jaguar for thorough testing. So thorough that it blew up at Brooklands. Which blew up the relationship. These artefacts would originally have been typed on onionskin paper and the tooth of time has compromised legibility on some of them. A hand-written memo is perfectly legible—if you can decipher the script. The captions here identify the principals and state their respective jobs, an essential aid for readers who don’t already know them.

The remaining Appendices contain patent details; camshaft profiles of three cars; 1933–52 results of the Shelsley Walsh Speed Hill Climb; the briefest of comments about AC Cars using SS chassis; a detailed table of all models’ weights, measurements, and speeds; notes about the nomenclature employed by the Drawing Office; and lastly a tabular summary of financial results, some of which estimates by the author because no audited accounts exist for the early years. While this does reveal trends relative to each other, the cardinal shortcoming of this data is that the values are not related/relatable to modern values (tricky but not impossible). There is an Index but it is quite short.