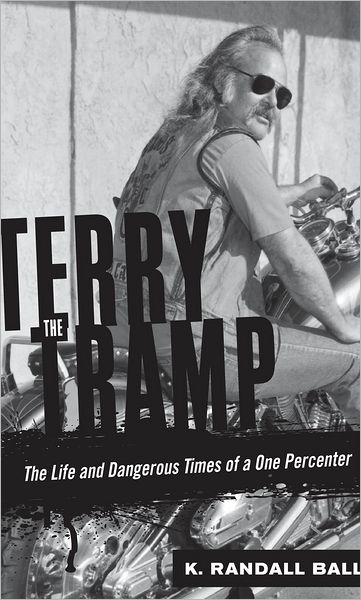 The “tramp” is one Terry Orendorff (b. 1947) from California. A “one percenter” is someone who goes a different direction than the other 99%. Whether that’s good or bad, romantic or dangerous is the dominant theme of this biography/docudrama.

Just like the 99%, the 1% seeks the company of fellow travelers. In the context of this story it is motorcyclists who have become bikers and organized themselves in something more akin to a gang than a club. These words already point to the very center of the issue, namely the assumptions, prejudices, and misunderstandings either side has of the other.

Among the more radicalized one percenter SoCal motorcycle clubs/gangs is the Vagos MC—and Orendorff was not just their president for 26 years but their international president, the club having branches as far afield as Japan. Seeking as they do to set themselves apart from society it is no wonder that books about, let alone by, a one percenter are not exactly mainstream—unless police reports make up the bulk of your reading material.

The fact that the author has a handle too, Bandit, is your first clue that this book is a bit of insider’s story. Keith Ball was a member of a club of much reknown/notoriety, the Hells Angels. In the 1970s he was editor of Easyriders magazine and nowadays presides over Bikernet.com, a website for custom motorcycles. This straddling of both worlds may have hardcore bikers complain that his book is much too tame and, basically, irrelevant. But then that is not the audience Ball is writing for. Rather, it is the rest of the world, the 99%, to whom he attempts to explain a life on the fringes. That crowd will find the book plenty intense and unvarnished, and will probably be as much conflicted about one percenters after reading the book as they were before.

There’s crime, drugs, sex, random violence, death aplenty. No amount of verbiage can make that lifestyle “relatable.” From broken childhood home, absentee father, poverty, nothing here is simple of pretty. Ball’s Preface examines the origin of purpose of motorcycle clubs (“Why did clubs change from straight-laced guys and couples in matching pressed uniforms into absolute wild men on bobbers?”) Unless you are already familiar with the subject, pretty much everything in here will surprise you! Ball squarely puts the blame for the rift into the lap of the American Motorcycle Association’s administrator from 1928–58, calling him a dictator whose ruling of the AMA with an iron fist had the inevitable result of engendering rebellion. True as that may be, it is clearly not what criminalized Orendorff who would have neither known of nor cared about it but simply fell into the open arms of an already existing outlaw biker culture.

As far as being a record of a slice of life of one particular person the book is obviously interesting, engaging, and relevant but it does little more than that, offering no answers, asking no real questions, and is imbued with a certain unnecessary pathos. Prose like this just makes you wonder what the author’s intent is: “But there’s something inherently romantic about neon reflecting on speeding chrome at 3:00 in the morning, just after ditching an angry cop and a pissed-off husband.”

Oddly, a few one percenters have stepped forward—if that’s the word—to say they’re the real Terry the Tramp or they knew the real Terry, and this is not his/their story but just another exploitation attempt by The Man.