Stirling Moss: All My Races 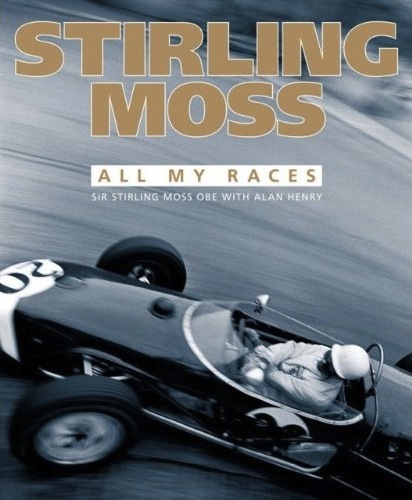 by Stirling Moss and Alan Henry

Forty-seven years after his career-ending crash during testing in 1962 Stirling Moss turned 80 in 2009, the year this book was published. It must be nice to turn 80 and be able to look back on a full and unusual life. And especially nice if you were a racing driver and lived to tell about it. Moss raced in an era when loss of life was so rampant that more than once the sport was pushed to the brink. It may be called the “golden era” but it also was a bloody one.

This book is not a biography but sort of an annotated racing calendar of the years 1947 to 1962. Written in collaboration with renowned motorsport journalist Alan Henry who has been a member of the F1 press corps for almost 40 years and covered more than 560 races, Moss describes each of his 585 races. Of these, 66 were World Championship Grands Prix of which he won 16. If you know anything about racing you recognize that luck and circumstance play such an incalculably large role that it is utter idiocy to infer from the fact that Moss never won a World Championship title that he does not have a rightful place among the greatest of drivers!

Born into a family that took motoring seriously—a father who raced at Brooklands and Indy, a mother who drove an ambulance during the war and together with her husband did rallies, and later still a younger sister who became a rally driver—Moss took to motoring in a big way. It is startling nowadays to think of the sheer number of races that were held after the eight-year hiatus imposed by World War Two. Also the variety of races available to Moss would be totally uncommon today, from hillclimbs to formula races, which naturally means the variety of cars he needed to master is very wide as well.

Each year starts with a full-page photo and a short summary of the year’s highlights. As the years unfold and Moss got busier this summary increasingly moves away from the personal to the strictly professional. The year’s events are then spelled out, one by one, beginning with a data panel containing finishing position or status, name of event, car driven, race dates, and one or two lines of text or other pertinent detail. This is then followed by a few paragraphs describing the race and specific circumstances that mattered to Moss. While he admits to not remembering everything, he did keep diaries through the years and that’s from where some of this commentary comes (and also, to some extent, from his previous books). This, then, is probably not a book one would read cover to cover but rather use as a reference source or to randomly peruse.

From 1952 on, the photos increasingly change to color. All have detailed captions that also list the source. In almost all cases they fall on the same pages as the events they were taken at but the photos themselves are not dated so the reader has to pay some attention as to what goes with what. The many photos are supplemented by racing posters, programs, newspaper clippings etc. The photos come from a number of sources and are thus uneven in quality. Their purpose here is to document and illustrate the specific events being talked about, not in being “art.”

A short, wistful postscript bemoans what Moss himself came to think of as his “premature” departure from professional racing after his terrific accident at Goodwood and his dissatisfaction with attempting to get back into a much changed sport in 1979 driving an Audi 80 in saloon car racing—an altogether forgettable exercise. To this day Moss remains a veritable fixture at vintage racing events and utterly approachable to anyone who cares to want to shake his hand.

The index—in microscopically small type—is divided into cars, people and organizations, and races and places.

An entirely superfluous postscript:
Moss survived decades of racing only to almost kill himself by falling into the elevator shaft at his London house on the very day this review was written (March 6, 2010). He hit the ground after a three-story fall breaking both ankles and several bones in one foot. Moral? There’s danger everywhere.