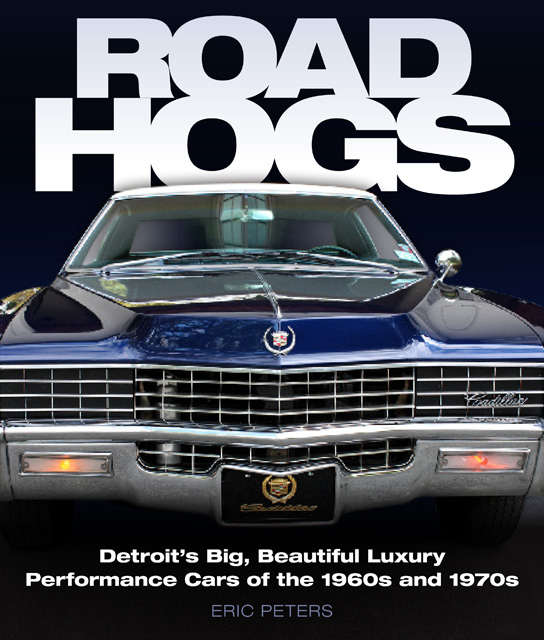 “Let’s start with the elephant in the room—literally. Size. The cars lovingly caressed in this book are absolutely enormous. You have no concept of this until you come face to face with one.”

The combination of book title and cover photo—a car so big it spills off the page—is clever! Author Peters refers, rightly, to the big cars of those years as “totems of a different America” and his book as “a funeral dirge.” They are no more and, in a world increasingly strapped for natural resources—from the steel to build them to the fossil fuel to propel them—will never be again.

But, if you know your automotive history you also know that those very years are marked by one thing that is anathema to the big car, and that is thesmall car, most particularly the small imported car. Small cars do not factor into this book at all, the one exception being the AMC Matador, and the reader who is new to this era needs to be mindful that this book covers just one particular aspect of it. Small cars, and the fuel crisis of the 1970s along with regulatory changes are mentioned, but only in passing.

Peters was a kid in the 1970s so it is only natural that the cars he writes about here—Americanus gigantosaurus as he calls them—imprinted themselves. Having owned several along the way to adulthood—among them some of the aforementioned small cars such as VWs and even a Corvair—he nowadays runs a 1976 Pontiac Trans-Am. He’s been writing about automotive topics since 1993, mostly online, and in 2004 wrote the book Automotive Atrocities: The Cars You Love to Hate (also for Motorbooks).

Here he covers 25 models divided into five categories. Three of them—convertibles, coupes, station wagons—are straightforward enough; the remaining two have rather more fluid boundaries. Inevitably, the question will arise why these 25 cars but there is no answer. They certainly are representative of the species and, after all, the book does not aim to be a general history of the American car. Where it is useful, cars from model years before and also after the target range are discussed (cf. 1946 Fleetwood, 1994–96 Impala SS). Neither the Table of Contents nor the Index list model dates.

The text describes how a particular model fits into the landscape of its manufacturer’s overall range, lifestyle/image/marketing issues, features and equipment, and technical specs. A “Things to Know” sidebar enumerates bits of interesting trivia. The narrative is peppered with references to “whales” and “dinosaurs” which are apropos enough, but then there is also a recurring, sort of over-the-top wordsmithing that is expressed in such heady stuff as “. . . and with a few missile launch tubes, an LTD would have been a fair facsimile of the USS Iowa during its first Gulf War sortie.” Is this relevant? helpful? clever? The space these flights of fancy take up would have been, in this reviewer’s opinion, better used by putting more meat on the bone and explain, say, “Corinthian leather” (a fantasy word cooked up by the Bozell ad agency).

Speaking of advertising, many ads are shown here and, where the type is reproduced large enough, really deserve to be read. Most of the photos are, in fact, culled from period advertising material. According to the acknowledgments, a good deal of that was sourced from the collection of Byron Olsen who has a number of books on American cars to his credit as well as railroad books.

Mentioning the illustrations opens a can of worms. The publisher, apparently without author review, wrote the photo captions and did the layout—with the unhappy result that, for instance, a ’58 Caddy is in the Buick Electra section and labeled as such. This, of course, makes the author look bad even if he had nothing to do with it. And there are other weaknesses, also outside of the realm of an author’s jurisdiction. They are indicative of haste on the production end: the subtitle on the title page is missing the “and 1970s” bit, and there are typos in those parts of the text the author normally does not write. Even the book jacket copy overreaches by trumpeting as fact something that will cause eyes to glaze over. It says, “American automobiles [at this time] were, without question, the best the world had to offer.” Groan. Other eras, yes, but 1970s cars had problems, and everyone who owned one knows it. If the space program had worked to the same low R&D and QC standards prevalent in the auto industry, American engineers would not have been able to put a man on the moon!

These observations do not diminish the book’s fun factor. A closing chapter points to another kind of fun: buying one of these cars today, cheap, because they’re “not yet the focus of speculator greedheads.” Just don’t forget that anything that deserves to be called land yacht has a mighty thirst for fuel—brace yourself for single-digit mpg numbers.

The Golden Age of Handbuilt Bicycles: Craftsmanship, Elegance and Function »
« The Competition Bicycle: A Photographic History