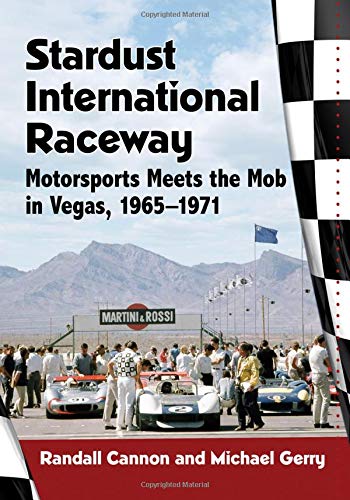 Having reviewed a number of books by this publisher on race venues I had good reason to expect that this one would not be merely a quickie history of a former racing venue. I was not disappointed.Most today might think of motorsport in Las Vegas in terms of the current Las Vegas Motor Speedway (formerly Las Vegas Speedrome), the 1.5-mile superspeedway that opened in 1996, or perhaps the four events held in the parking lot of the Caesar’s Palace casino—Formula 1 in 1981 and 1982, then CART (Championship Racing Teams) in 1983 and 1984.

Stardust International Raceway opened in 1965 but this book paints a fuller picture by giving a detailed account of motorsport in the Las Vegas area during the first decades of the postwar period. The book is very well done and full of the nuance and complexity that is too often missing from such efforts.

The story of the development of Stardust International Raceway makes for fascinating reading—something that even a synopsis cannot do justice, given the many twists and turns, both figuratively and literally—that saw this patch of desert turn into a race track, one that became a venue for the fabled Canadian-American Challenge Cup championship, the Can-Am, from 1966 (where it was the deciding round in the inaugural championship) to 1968 (where Jim Hall suffered a devastating crash in his Chaparral). The United States Road Racing Championship of the Sports Car Club of America (SCCA) held events there in 1966 and 1967; and the former was won by John Cannon driving a car entered by Dan Blocker, “Hoss” of the popular television series Bonanza. The track also hosted an event on the United States Auto Club (USAC) National Championship Trail in early 1968, as well.

While the on-track action might have been exciting, the real action—as the authors make crystal clear—was off-track, in the way the financing and many deals were made, the not always on the up-and-up “sausage-making” that finally made the track possible. And, yes, the mob was involved. It is an intriguing story that simply needs to be read to be fully appreciated—and believed, for that matter.

I found something unexpected in the book that will probably surprise other readers too: the pivotal presence of drag racing in this tale, supplying a context that a lesser history would probably have omitted. Too often it is overlooked that Stardust International Raceway also had a drag strip. The National Hot Rod Association (NHRA) sanctioned four events there in 1967, 1968, 1969, and 1971.

During one of my rare visits to Las Vegas, visiting a friend who was donating research and archival materials relating to motorsport, it was a surprise to discover that he lived within jogging distance of the former track—but had no idea what it was because it is now just another of a multitude of the housing developments that dot the Las Vegas area.

If you are ever in Las Vegas, find Paul Meyer Park, bordered by West Flamingo Road, South Rainbow Boulevard, West Tropicana Avenue, and South Buffalo Drive. The authors deserve great credit for producing what I think is an excellent example of what motorsport history can and should be. The book has footnotes, a bibliography, and the photographs are well-integrated into the text. Big bonus points right there, of course.

Having slogged through more than my share of books on motorsport I will honestly admit that I did not anticipate this book to be as well-written as it is. Yes, some of it is standard motorsport-book-writing, which is difficult to avoid in this sort of material, but they do also manage to lead the reader through some of the personalities and machinations involved on the Las Vegas scene.

Overall, not only is it an excellent book, but a splendid example of what the often overlooked and underappreciated “enthusiast” or “hobby” motorsport historians can produce given the opportunity. It is not often that one has the great fortune to find monographs such as this one.

One Formula – 50 Years of Car Design »
« Design Between the Lines