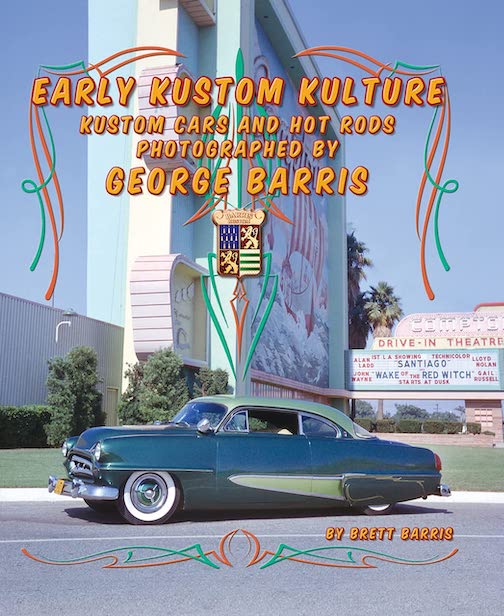 This photo of the cover doesn’t capture that the lettering and pinstriping are done in reflective foil. Very on message! Publisher Last Gasp is quite the institution in San Francisco, having produced since 1970 underground comic books and a large body of work pertaining to popular culture.

With a clear-cut title like that you’d think there would be lots to say about a new book about the “King of the Kustomizers,” not least one by his own son, but there isn’t because it contains no text other than short photo captions. That does not diminish its relevance, it just yields little to analyze.

Unlike other books of photos of kustom cars this one does not have a theme or organizing principle or “purpose.” The one common denominator is that all photos were taken by George Barris in period, meaning the 1950s to early ‘60s, partly to capture cars built by others that caught his eye, and partly to promote his own cars to customers and magazines. 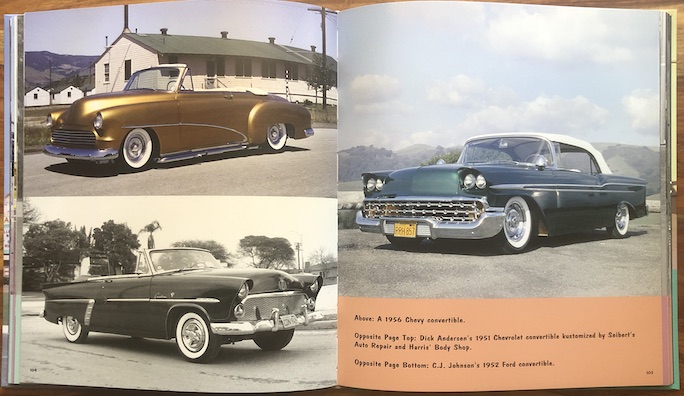 From mild to—relatively—wild, these are all cars you could actually see on Main Street, USA. You’re on your own to spot the mods. Also, contemplate the backgrounds: random? intentional? interchangeable? 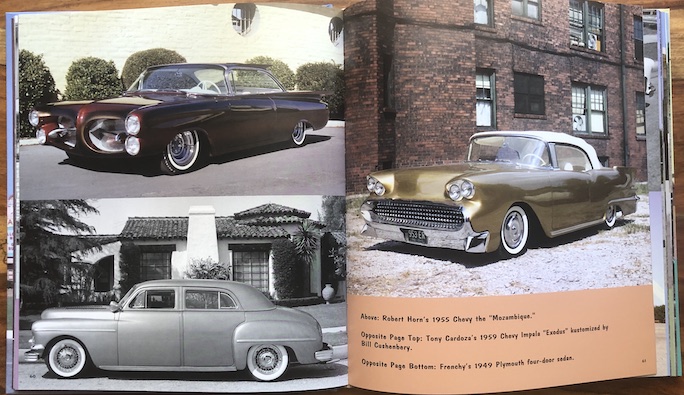 The former are especially interesting on several counts: they’ve probably never appeared in print before, and it is interesting to see what someone who was already a master in his field found noteworthy. If Barris knew who owned the car or who had done the work, he appears to have noted that on the prints but there are quite a few were the caption merely says “unknown” on either count. But, again, that makes them all the more interesting, in a documentary sense. Also, unlike the often highly stylized and impractical show cars (cf. the driving phone booth “Tele-Car” or the hovercraft-like “XPAC 400” air car, both in the book), they illustrate what sort of machinery the proverbial man on the street actually put into circulation. Here the lack of any sort of overarching narrative really renders the book rather too inaccessible to anyone who doesn’t already have a frame of reference—which invites the observation that both the author and the publisher must be assuming that their target reader will already know [1] what role Brett Barris plays in regards to the Barris Kustom legacy (website, merch, restoration etc.) and particularly managing the Barris Kustom photo archives, and [2] that the same author and the same publisher have already done a major, context-rich, almost 500-page book (co-written with anthropologist/gallerist/curator Douglas Nason). Six years in the making, King of the Kustomizers: The Art of George Barris (ISBN 978-0867198096) was published in 2015 and sold out in its first year. It is easily and cheaply found used today and while it was by no means the book to end all (Barris) books it covered a lot more ground. 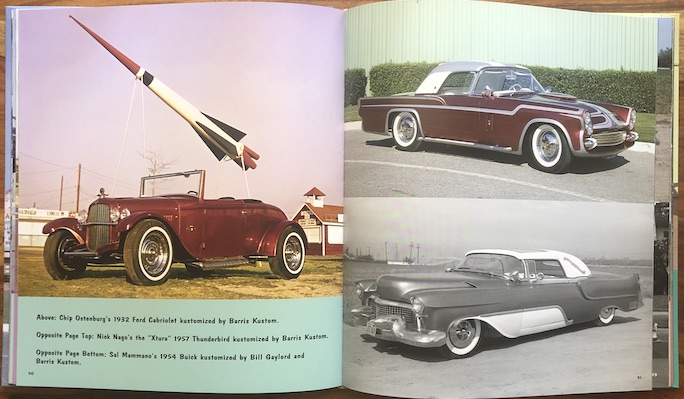 No, the 1932 Ford cabrio is not customized with a missile launcher, it’s just a nice example of George Barris seeing the whole picture. 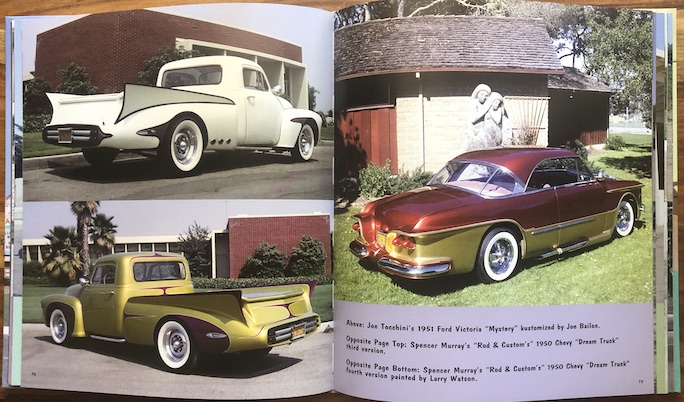 The truck on the left page is a good example of a lack of specificity in Barris’ captioning: it’s the same vehicle, shot at two different times (but when?), owned by the same guy in both cases (even the building looks the same). The top shows the third paint job, the bottom the fourth.

The aforementioned Barris photo archive at Barris Kustom City, which Brett Barris started, is the repository for the thousands of photos George Barris had taken in his day. About every two weeks a new batch of photos is digitized, cleaned up, and uploaded to the web. During Covid someone had the idea to present some of them in book form. 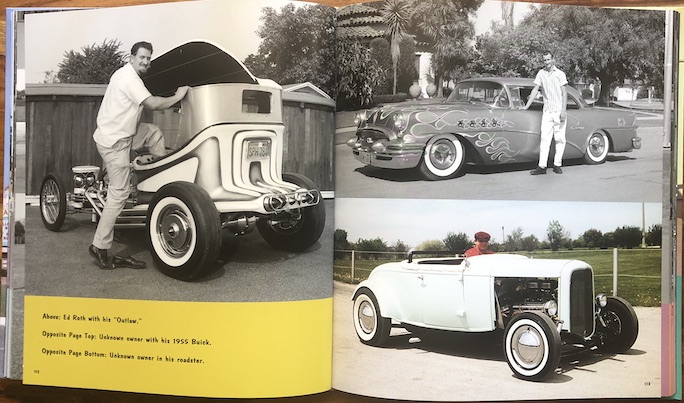 Hey, even Big Daddy has to take off his shoes! The other two fellows are “unknown,” photographed “somewhere,” “sometime.” Doesn’t make the photos any less interesting.
There is an irregularity to report about some of the captions: some of the car show photos capture the display placard (owner/builder/car name and the like)—and still the caption manages to introduce misspellings . . .

Considering that the bothers Barris began making custom cars in the early 1940s it is not clear why the press release insists that these photos represent “the early parts of the kustom culture movement” or that their “angles and lighting that would bring out the beauty of these creations” are attributable to George Barris’ eye as “a sculptor of cars.” Yes, some of the photos have architectural elements as backdrops that are surely not random but just as many are taken in nondescript parks or residential streets. None of this is really relevant to the one thing the book does do: seeing the world of custom/kustom cars (and a very few motorcycles) through his eyes we understand his own creations more fully. From “unknown owner with his 1940 Ford coupe” to Von Dutch wielding his pinstriping brush to an icon like the Hirohata Merc you’ve seen a thousand times before, all the photos invite/reward repeat viewing, dissection even. Many of them are dated, wherein lies a clue that is really only obvious when you are prompted to connect the dots: some of these cars must have been brand new at the time they were taken to the customizer! 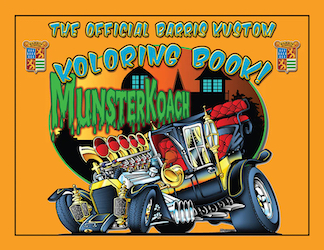 Lastly, if this book gives you the urge to go out and customize but you don’t have a suitable car handy: by the time you read this the publisher will have released a 52-page coloring book, The Official Barris Kustom Koloring Book!, ISBN 978-0-86719-893-5.