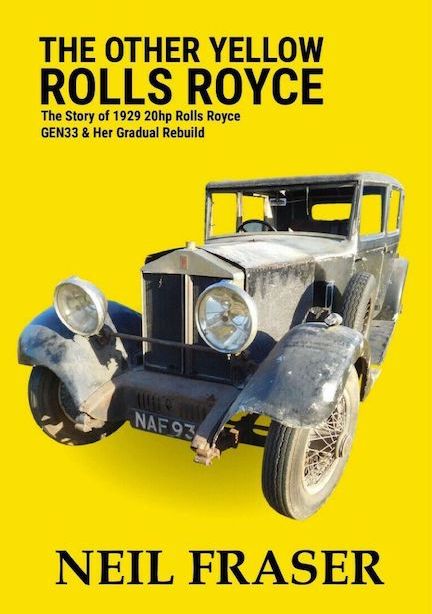 “Decide why you want to buy a wreck. Is it to make money, spend hours every week in a cold, draughty and damp garage with no end in sight or just a hobby to keep you busy?”

As if restoring a car is not expensive and tiring enough, writing a book about it won’t make it any easier, although it may be cathartic! The car is 1929 20hp GEN33 and the writer an Irishman who had dabbled in old-ish cars but had never worked on a vintage car and never on a Rolls-Royce.

A few preliminaries: 1, the yellow Rolls-Royce referenced in the title is of course 1931 Phantom II 9JS with Barker sedanca de ville body and star of the eponymous 1964 Hollywood movie. Owned for ages by a fastidious collector and Pebble Beach class judge and superlatively restored mostly by himself to Pebble Beach quality, 9JS only shares the coachbuilder and the general color with GEN33. To even have thought of choosing that title, Fraser (who turns out to be an aircraft engineer and electronics entrepreneur, which the book also won’t tell you) probably knows his Rolls-Royces better than he lets on. 2, at first blush the author’s name might bring to mind the excellent book Bentley Beauty but that was by a Neill with two ells. 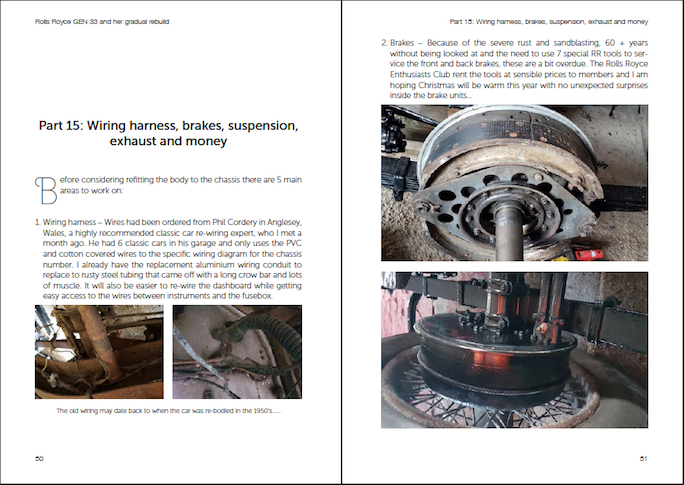 That the book is in sort of a staccato-style is because it is basically a collection of individual blog posts for the regional vintage car club. And, just to get it out of the way, it is self-published and really, really could have used an editor (or at least someone to put the hyphen into “Rolls-Royce”). But that would have cost money, and that brings us right to the core of this book: Fraser is on a mission to resurrect his wreck on the cheap. From using the lowest bidder to ship it home (only to have to resort to calling the police to get the car out of their clutches) to writing “with the budget long gone, white ceiling emulsion paint was my only option . . . (joking!)” he really does employ methods that aren’t properly Best Practices. He even allows that his procedures and materials “may not be technically correct” but the book is so full of good intentions—helping other enthusiasts—that it does deserve to be brought to the reader’s attention, with the Caveat Emptor proviso. Which, ironically, is what Fraser ought to have heeded if he had known better: his 18-owner car that had been rebodied in the 1950s (albeit with an original 1932 Park Ward body from another 20hp) and stuck in a barn for 30 years cost him “a mere” £14,000 to buy (after a 20-minute think) and two years of labor later has racked up another £50K in parts and subcontracted labor, not to mention the £3000 he laid out to produce this book. As collateral damage one might even count the fact that his wife was angry with him for a year, hence his sage advice, as item 1 in the last chapter “Conclusions”, to “tell your partner before the purchase.” 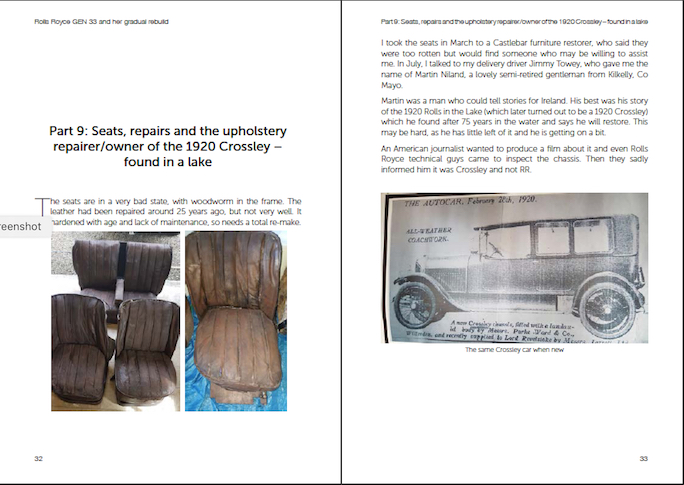 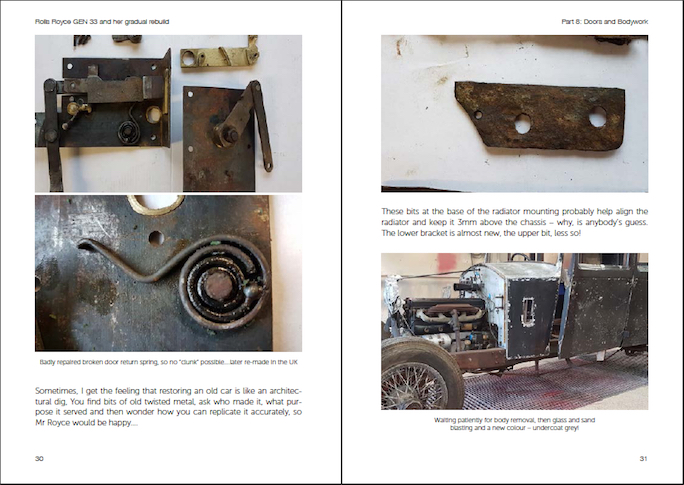 Fraser covers every aspect of the work he and others did, solutions they devised (some quite improvised in the name of savings), resources found (as far away as South Africa to get new rubber door alignment spacers made) and marque club contacts made along the way. All this is profusely illustrated with before and after pictures although the photos are small. Readers in Ireland will find the list of regional vendors useful. Other appendices present build sheets etc., ownership history, a multi-page list of everything that was broken/missing on GEN33, items still to fix, spreadsheets of all costs, the other 82 cars in the GEN series, and more. About GEN34, for instance, he writes it was “painstakingly restored at a suggested £80K” so he does know how far the pendulum can swing. It’s a good thing Fraser didn’t find the Rolls-Royce he really had his heart set on, a 1970s Silver Shadow for around £12,000. A car at that price point, even a good one, would in the long haul ruin him for sure. 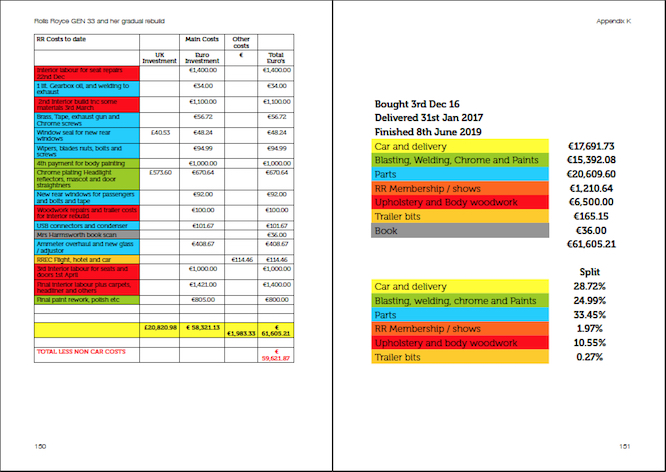 For the record, the most expensive car is a cheap Rolls-Royce (Bentley). Besides, cutting corners violates everything F. Henry “When the Price is Long Forgotten, the Quality Remains” Royce and W.O. Bentley stood for. So there.

A Grand Complication »
« My Greatest Defeat