Isky: Ed Iskenderian and the History of Hot Rodding 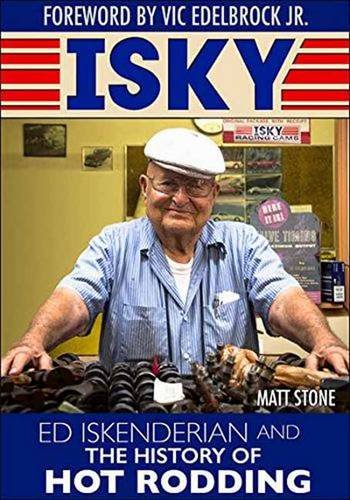 “Young Airman Ed Iskenderian never achieved his dream of being an Army Air Corps pilot, which certainly kept him out of harm’s way during World War II. Ed attributed his survival of the war to ‘the Man upstairs having a higher calling for him, or perhaps someday God decided he might need a cam for a flathead.’”

Pick up any book about the early days of post WWII car enthusiasm and hot rodding in Southern California by any author from any publisher—David Fetherston’s Heroes of Hot Rodding from MBI in 1992, Hot Rod Pioneers authored by Ed Almquist for SAE in 2000, or the 2008 Business of Speed by David Lucsko published by Johns Hopkins are just a few examples—and you’ll find pages, chapters even, on a man named Ed Iskenderian.

So why has it taken until now for there to be a stand-alone book about this man fondly, even reverently referred to simply as Isky (b. 1921) or the CamFather?

Most likely because to create a stand-alone book there needs to be more than what has been easily and quite comprehensively told about the man in magazine-length pieces or book chapters. So it has taken until now for an author like Matt Stone, working with his editor Bob Wilson at CarTech Publishing, to come up with a workable approach of honoring and telling the story of Isky: Ed Iskenderian and the History of Hot Rodding. 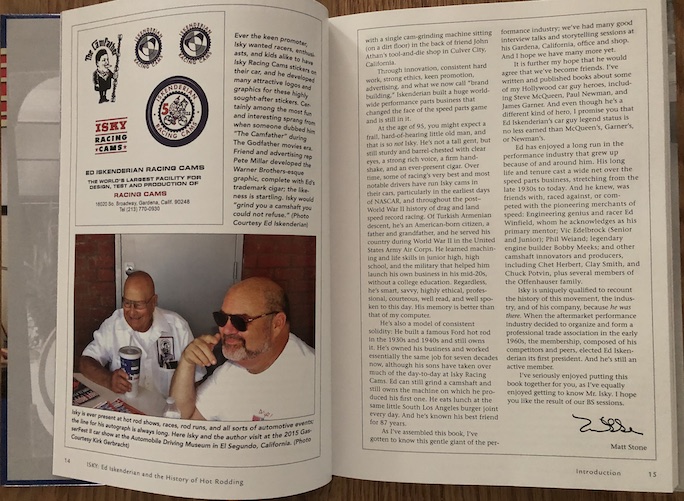 As said, the Iskenderian story of him learning aspects of cam grinding from the master, Ed Winfield, then going on to build his own cam grinder and develop his own successful techniques has been well covered. So too have many of his associations with the likes of Vic Edelbrock, Senior and Junior (who wrote the Foreword here), and just-starting-in-his-own-career Don Garlits, Mickey Thompson, and others.

What sets this book apart is the richness of Iskenderian-related imagery for as you’ll also discover as you read, Isky is what you’d call a “saver”—and he’s “saved” just about everything his entire life. The word imagery is used purposely because all of the images are not photographs though there is an abundance of those, with a good balance between period and contemporary ones at that.

Other images are some of the advertisements Isky ran back in the day. They were nearly always full page and that’s how the book presents them so they are readable—every educational and joyful word of them for Isky believed in the value of promotions, advertising, and marketing. And, there’s also the entire first “catalogue” for Iskenderian Racing Cams, produced in 1950. All his life Isky, naturally friendly and outgoing, has been skilled at connecting with people. Likewise his ads display a natural instinct for both creativity and effectiveness. 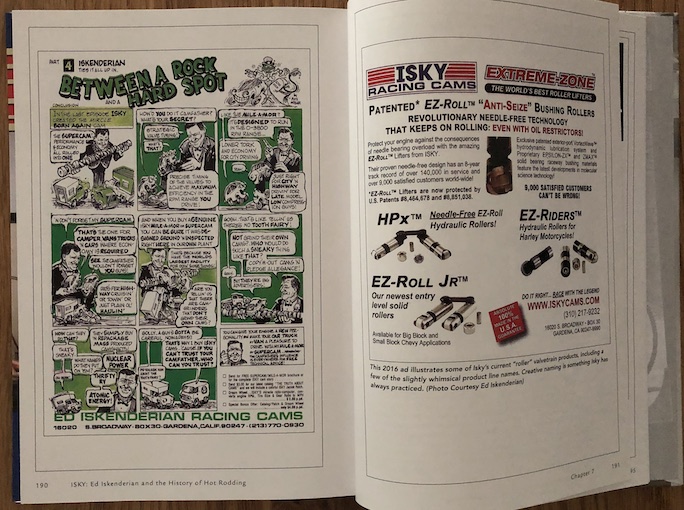 Pete Millar, a drag and hot rod cartoonist of the day, also drew Isky’s cartoon advertisements for him. Pete is the one credited with creating the caricature of cigar-chomping Isky, naming him the CamFather. Millar portrayed Ed as a leader in his field, just as he was also a leader in the aftermarket industry as was affirmed when the brand new Specialty Aftermarket Equipment Association (which in those first days was called the Speed Equipment Manufacturers Association) elected Isky as its first president in 1963. He has remained active in the organization to this day. 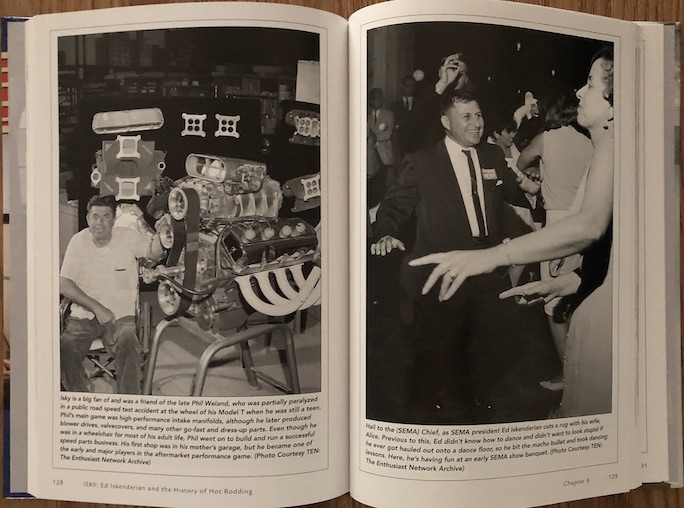 Typical of Isky, he claimed he was elected because he was absent when the election took place. And SEMA morphed with the times, just as has Isky. Today well into his 90s, he’s still a regular at his business although the day-to-day operations are handled by his two eldest sons, Richard and Ron. His youngest has his own subsidiary operation, Tim Iskenderian Cams, for which he “developed and produces a line of high-performance cams for small-bore single- and 2-cylinder lawnmower-style engines that can push a minibike to more than 100 mph.” 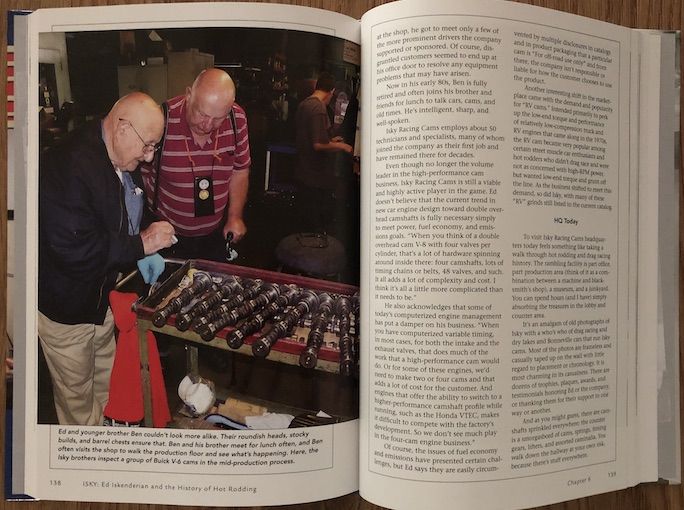 Ed Iskenderian is one whose life has been characterized by being naturally inquisitive; learning then growing and adapting as he incorporated new understandings into every facet of his life. Over the years he’s developed some favorites that he shares often in conversation, such as: “Complacency can be lethal” or “Honest competition is generally healthy for everyone involved, but keep it friendly” and “Work hard, but make sure to take some time off to go fishing.”

It’s a good read made better because Ed Iskenderian and his story is filled with such joie de vivre.

Ed Iskenderian and the History of Hot Rodding