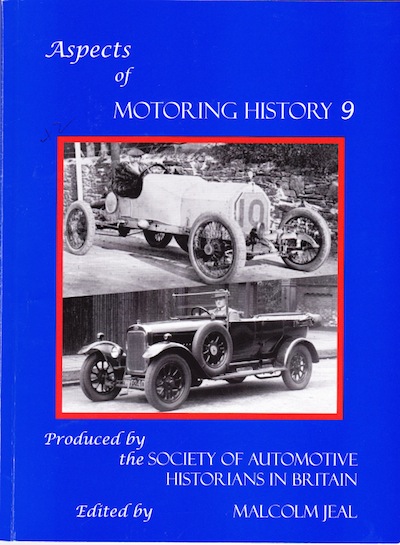 Each year the Society of Automotive Historians in Britain produces a publication containing articles on a wide range of subjects, many of which are unusual and would not make the pages of the bookstall magazines. They are a fascinating collection edited by motoring expert Malcolm Jeal.

Volume no. 9 has an article by the Editor on the Italian car manufacturer CEMSA – Caproni. It opens with a quote from the late Michael Sedgwick: “Much has been written of Italy’s cars. Too often, however, writers show little comprehension of the background that bred them.” Jeal has taken note of this and gives much background to this short-lived car (1946 to 1950) which never went into production. The small front-engined, front wheel-drive car came from the Italian aircraft industry. It appeared at a number of continental motor shows. In 1955 designer Antonio Fessia was approached by Lancia and became their technical director. In 1961 the new Lancia Flavia appeared with a 4-cylinder horizontally opposed engine driving the front wheels. As Jeal says, “Around fifteen years after Fessia had originally sketched out his ideas for Gianni Caproni, his project had finally come to fruition.”

Just to show that historians have a sense of humor, there are some reproductions of cartoons from Punch, with a quiz attached—what makes of car are featured? Amongst the answers were the incredible Pennington Victoria.

There is a long article by Bruce Dowell on “The England family’s forty years of motoring” starting with a 1904 Mobile. There are some nice quotes such as this one referring to a 1903 De Dietrich: “The car itself was very reliable but the tyres were a persistent ‘nightmare’ . . . it used to eat them.” During WWI his P&M motorcycle was fitted with a gas bag and there are photos to prove it.

John Dyson treats us to a great account of Sir Alfred ‘Toby’ Rawlinson, racing driver and early aviator. There is a lovely illustration captioned “The TT Hudson in its war-time guise. The bullet holes in the bonnet and scuttle, together with the [German] helmets on the front mudguards, and the tattered Union flag, all bear witness to some close encounters”.

Michael Worthington Williams tells us of the value of motor show catalogs and reports from the shows when researching.

Historian Peter Card then takes us back decade by decade picking out just one thing in each that he found interesting. In 1943 it was reported in Motor Sport that the Ministry of Works intended to break for scrap a quarter of a million motorcars. Bill Boddy mused that “breakers yards would be barren by 1944 and that many veteran and vintage cars . . . would be lost”.

As you can see this publication contains an eclectic collection of articles.

Aspects of Motoring History, no. 9

British Buses 1967 »
« Keep A Knockin’, The Story of a Legendary Drummer