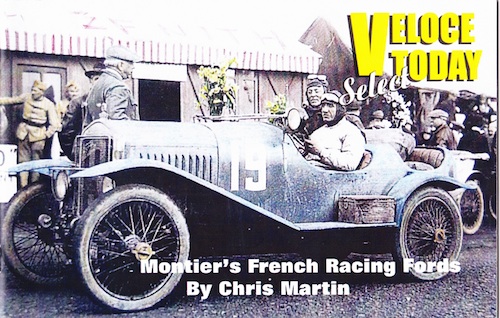 I am so glad there are people who are prepared to share their researches on little-known motoring subjects by having them published for all to see. Martin, who has spent much of his life within the Formula I circus became fascinated by Charles Montier when he discovered he had entered a Model T Ford in the Le Mans 24 hour race 1923–25.

At the age of 16 he helped his father Elie and friend Gillet make a steam car that was finally completed in 1895. Though advertised as being in production, only one was built and they soon realized that the gasoline engine was the way to go. Charles moved to Paris and exhibited his first car in 1897. A number were built, but he could not raise the investment needed to become established in the market. He took a job at Darracq and in 1911 moved to Tours setting up a garage handling both repairs and servicing. He had agencies for S.I.V.A and Gobron and then Ford. During WW I he designed a tractor based on the Model T Ford. This was to be the first of many Montier adaptions of the Model T.

Whilst keeping his Tours garage he moved back to Paris and became a Ford agent there. He began improving the chassis and engines, fitted his specials with Weymann and other light bodywork, and in 1924 designed and built an ohv head for the T. He even replaced the Model T gearbox with one by Sinpar.

He started competing in races and hill climbs. He was upset at not being given a place in the 1923 French Grand Prix at Tours, so turned his attention to Le Mans. He came in a very creditable 14th with W.F. Bradley from the Autocar reporting that this car “had very much more of the Montier than the Ford construction about it.” He also entered in the next two Le Mans events and took part in many other races. With the coming of the Model A, he set about modifying that and competing in it. At one time he even made an 8-cylinder race car by mounting two Model A units in line. When Ford merged with Mathis in France to make the Matford they dropped a number of Ford agencies, Montier’s being one. Charles then ran a taxi service in Paris “apparently re-bodying Montier – Ford specials for the purpose.”

This is a small booklet in the “Folio” series but very interesting all the same.