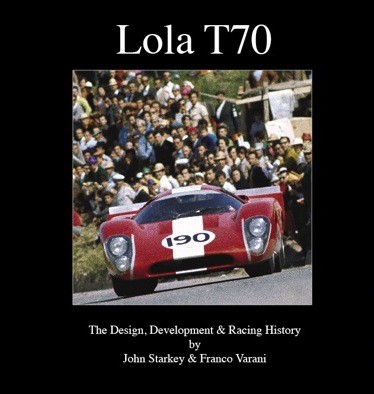 Built by one of the top suppliers of racing chassis to various series in the 1960s, Lola Cars’ T70 model quickly established itself as a competent and for a while dominant contender among the sports-racers of the day and even showed F1 cars its tail lights. Over a hundred were made in three Marks, and in 2005 the current Lola company began a series of official Continuation models.

Author Starkey positively loves the T70. He has raced them, owned them, and brokers them. And he writes about them. He has done, and is doing, the same with quite a number of mouth-watering machines—even a hydroplane—but the T70 is top dog. In between the racing he has operated a folk club, managed a comedian, curated the famous Donington collection of racing cars, and written 17 books (including a novel) of which he has published 13 himself. Meaning? The man has enthusiasm and gumption in general and hands-on experience with the T70 in particular.

Just to get it out of the way, and without making too much of it: what he is not is, strictly speaking, a historian but the co-author of this book is Franco Varani, the seasoned data wrangler who once maintained the Motor Racing Retro website (long defunct) and compiled all sorts of reference CDs. The reason to even raise this is that for readers with a long memory there will be a hair in the ointment. The Lola literature is pretty thin; Starkey himself has thrown his hat into the ring thrice before; his first T70 book has been reissued four times since its first publication in 1994 (last in 2008 by Veloce). These are books for readers with quite specialized interests—and it’s no secret that some of these have taken noisy exception to his previous books in regards to accuracy, completeness, and relevance. By way of counterpoint it must be noted that Lola Heritage, i.e. the company’s own “history minders” (also not historians per se) whose input was sought and given for all books, never raised any flags or distanced itself from the published work or curtailed further cooperation.

The division of labor here between Starkey and Varano is not elaborated upon but one assumes it is the competition and ownership histories that benefited from Varano’s tweaks. Also, any number of T70 owners have provided data and photos and made themselves available for interviews. Certainly enough eyes—of primary sources!—have been on this book to make Starkey & Varani’s claim/hope that their book will be considered THE T70 book unreasonable to dismiss out of hand.

Brian Redman penned the Foreword—and for once it is really specific to the topic and a credit to this important US racer’s “been there/done that” vantage point. The first seven chapters make up only a third of the book and cover the prototype and then racing and development history. Opening remarks are devoted to the immediate prequel to the T70, the Ford GT40 that Lola founder Eric Broadley (b. 1928) had been hired to design and which on the one hand cost him 18 frustrating months of his life but on the other spurned him on all the more to finally build the car he had wanted to do all along. Starkey’s remark that Broadley “has yet to write his own biography” is commendably polite because Broadley (“I am not interested in history, only the next Lola!”), who can be rather brusk at the best of times, has resolutely refused to cooperate with anyone broaching the subject. Starkey does the next best thing and uses throughout extensive quotes from other Lola folk. An eighth chapter discusses the T70s modern-day success in historic racing and the reasons for it (mechanical reliability, at last).

What the Mark overviews already touch upon in passing is then fully fleshed out in the individual chassis histories on the following 400 pages. These grew out of weekly posts on Starkey’s website starting around 2007/08. The level of magnification depends on the availability of records and owners’ and operators’ interest in preserving them. Back in the day, for instance, Lola’s two principal US agents (first John Mecom then Carl Haas) didn’t bother to preserve sales records and even the factory’s own records were discarded when they moved factories, including the original T70 drawings. Race results in newspapers etc. are notoriously fickle (across the board, not jut in Lola Land) and still today are being consolidated, cross-referenced, and reconciled. In other words, there’s hardly a sentence in the individual competition, ownership, and restoration histories that doesn’t contain a name/date/place/chassis—and there may well be a mistake somewhere, but not for lack of trying! Each chassis listing contains two color-coded tables, one for race results and the other an overall timeline. 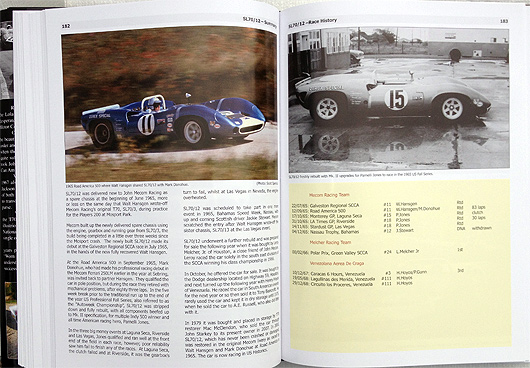 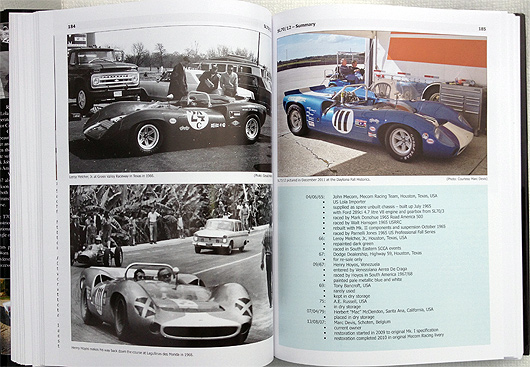 The writing is less narrative and more a stringing together of facts, often inevitable in this sort of book. The rather uninspired design could, however, easily have been improved but it works. Even after all his years in the US, Starkey uses his native British spelling. He also employs that culture’s—ahem—“creative” use of grammar and casual attitude towards sensible punctuation. Shakespeare’s Richard III may have offered his kingdom for a horse but readers sensitive to language may have the urge to offer their kingdom for an occasional hyphen or strategically placed comma. Just one umlaut, please! Even in a “car book” this, along with the all-out typos (not too many though), is a weakness, mainly because it is so preventable. 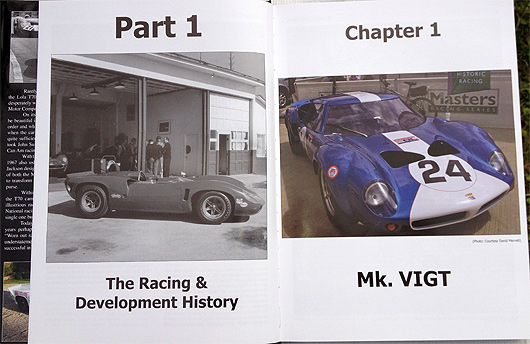 Photos are plentiful, none smaller than half a page, succinctly captioned, and credited (many from the Lola Archives). There are only a few construction, chassis-only, or component detail shots. Both of the b/w cutaways are too plugged up to reveal meaningful detail. Most photos are sharp and clear and even the few that aren’t serve their purpose. It is curious that so many of the 1970s and newer photos are b/w. Paper, printing, and binding are so upscale that the price doesn’t seem unreasonable. Indexing such a data-laden book would have required many arbitrary choices so it’s just as well that there isn’t one.