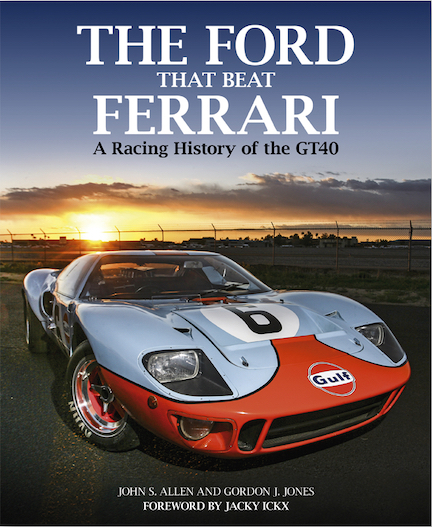 “Only with extensive illustration did we feel we could do justice to a car that was raced in so many different guises and in such a bewildering variety of liveries. Motor racing is colourful, and the GT40, built in larger numbers than almost any other racing car before or since, made a prominent contribution to the colour of the golden age.”

Who would have thought that a car movie would be a 2020 Academy Award contender for Best Picture (and three other categories)? It’s because Ford v Ferrari really isn’t a car movie, it’s a people movie—which is why it will frustrate motorheads. Mind you, there is plenty of really good car stuff and cinematography—and sound!!—but it is not a documentary. It does, as a theatrical movie may and must, subjugate historic fact to story arc. Not to worry, though, if there are things you want to know about the fuller story, this book has answers, at least on the Ford side. 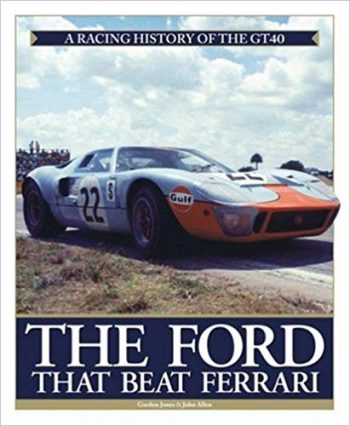 It is surely not coincidence that the book came out only a month after the movie but this isn’t quite so unusual an accomplishment when you consider that this is actually not a new book but a third edition of a title first published 34 years ago, by Haynes! Haynes shut down some years ago but this newest one still has that distinct Haynes flavor in regards to design and paper stock etc. and that is because the current publisher, Evro, not only took over a good part of the Haynes list but also their editor.

The second edition (2005) added substantially to the first one (1985, left), whereas this 3rd is basically the same as the 2nd plus an additional 16 pages at the back of the book (focusing on continuation cars, new builds, survivors, the Gen 2 modern-day Ford). Not that you would know this unless you stumbled across the opener page of the last section and noticed its title, “Update 2019”—which doesn’t match the Table of Contents that calls it “Part VIII: And Still the Magic Lives On.” 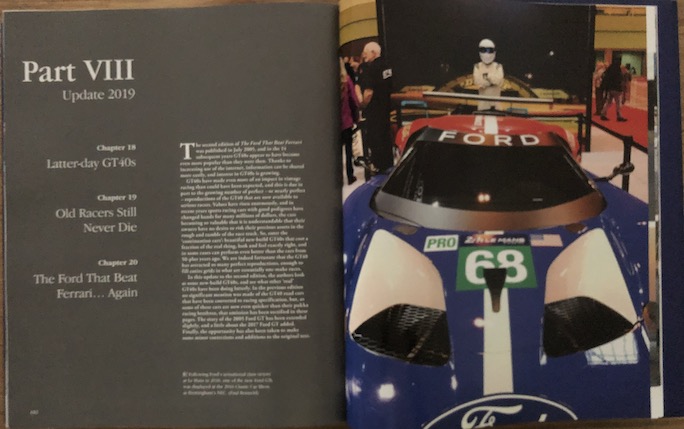 Moreover, the Introduction is not updated either so a reader really is given no guidance. The publisher says there are detail changes throughout, as indeed one would think inevitable after this 14-year remove from the previous edition, but you’d have to read both side by side to find them. 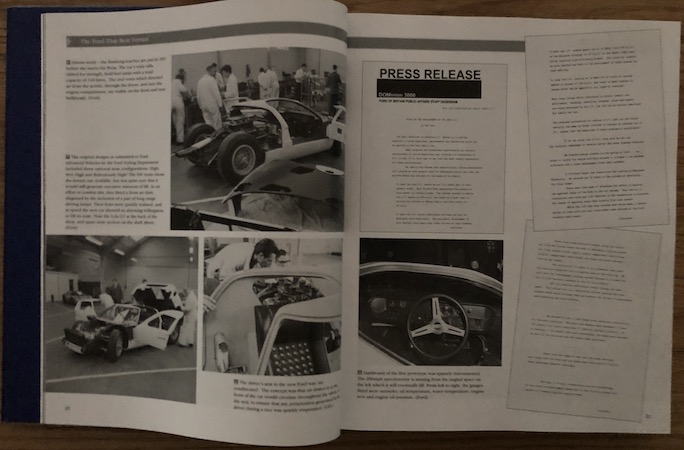 Divided into 8 parts of 2–4 chapters each it quickly becomes clear why this book is the sort of classic that deserves to be kept in circulation. The introductory quote above hints at two items that make this book different from the many others: very many photos (850 on about half as many pages) and coverage of the many privateer teams that ran the GT40. If you had formed, anecdotally, the opinion that the GT40 was one competent car on the pro circuit you’ll be positively amazed when you peruse the 150-odd pages that recount 68 private teams. Even GT40 pilot Jacky Ickx expresses surprise in his Foreword! This is probably the right place to mention that both authors have long-standing motorsports interests at all levels. 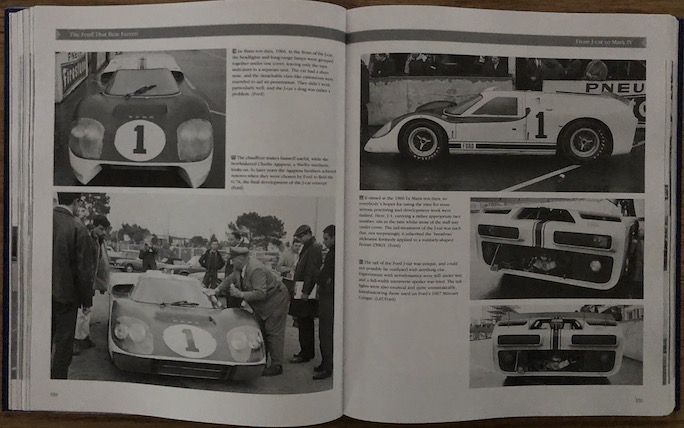 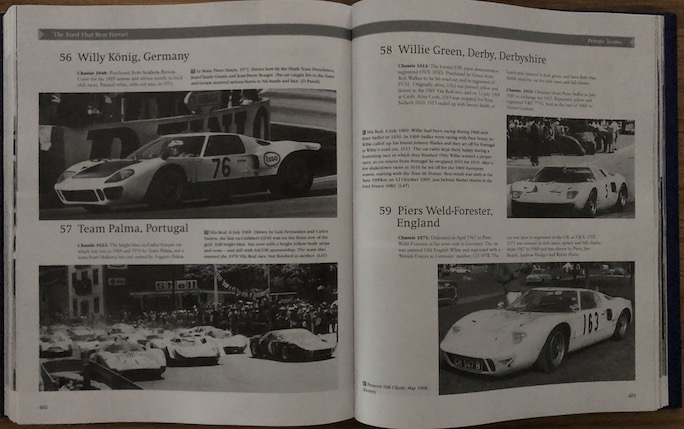 The page–photo ratio means of course that the photos, which are very extensively captioned, take precedence and the bulk of the story is told pictorially. The first two parts range from the GT origin story to the model’s design/development. Notable is that the chicken/egg question as recorded here of who went first to whom with the idea of a merger is in alignment with the current body of knowledge (Ferrari to Ford Germany, through diplomatic channels, but Ford did not realize who the anonymous inquirer was and, independently, made their own overture to Ferrari). While this question may appear peripheral to some, it really is the crux of the matter in all the subsequent shifts of perceived “power” among the principals! The whole Ford v Ferrari episode may never have played out at such a shrill pitch if the initial courtship had turned out differently! 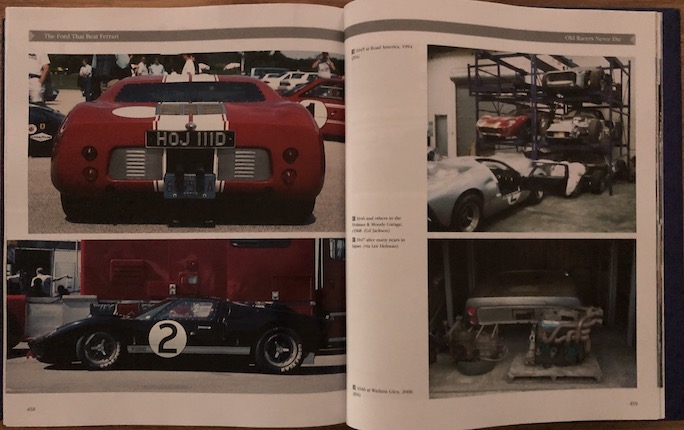 The writing is fluid and engaging, with fully fleshed out prose and finely nuanced, every umlaut and comma in its place. The authors present a coherent and convincing story, the arguments line up and thus the outcomes do too. A saga like this is about more than nuts and bolts or slide rules or even money. The book does not have an Index so you cannot fully appreciate the fullness of its approach until you’ve read it.

People to whom chassis lists are important will be delighted that this book not only has them but, helpfully, points out those entries to which changes have been made since the first edition. 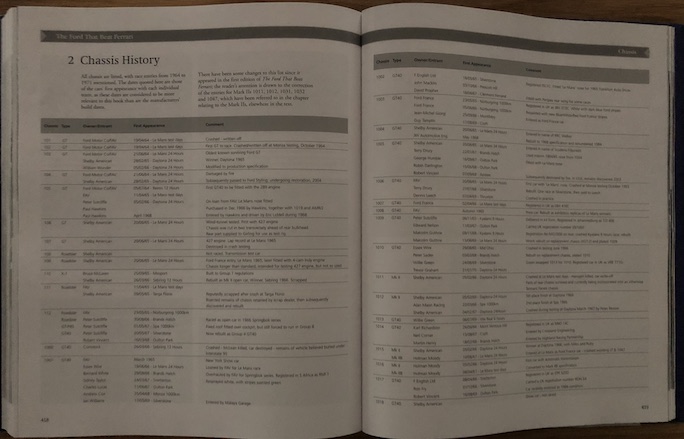