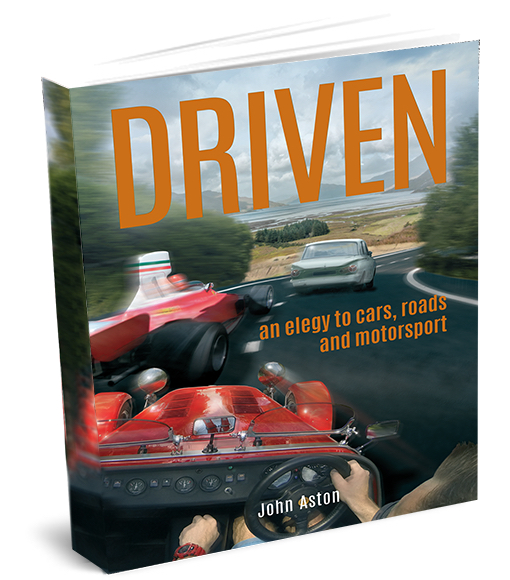 “If I hadn’t spent all that money on car magazines there’d be a Ferrari in my garage. Trouble is, if I hadn’t bought all those magazines I wouldn’t have known which one to buy, would I?”

Even the book’s original title, overruled by marketing types, would have failed to convey what it is going 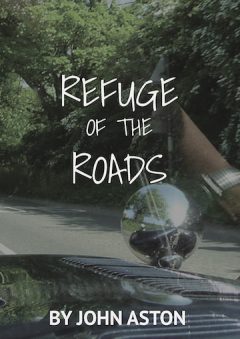 to be about: Refuge of the Roads (with apologies to Joni Mitchell; and still the title of the blog he started around the time he sharpened his pencil for this book, literally on January 1, 2017 [what was your New Year’s resolution??]).

If his name sounds familiar it may be that you have two earlier books of his on the shelf, in a different section—angling (2007, 2012). Interestingly, even those fishy books have a whiff of petrol, NASCAR of all things. Or it may be from reading the newsletter of the Classic Sports Car Club where he is a “writer in residence”—or it may be from this here website for which he has penned eminently readable, engaging reviews with a literary lilt.

“Autobiography with opinion as well as a bit of ranting” would be a good label to paste on his books, angling and motoring. Old enough to be retired from a professional life in lawyering, he’s been around. And having kept his eyes and ears open, and having allowed early influences to shape his core he brings the key thing to the table that elevates books: a personal voice, with the backbone of an alarmingly firm grasp of fact.

If nothing else, read his reviews here. That on the late Russell Bulgin’s collected writing will also give you a taste of Aston’s style, with its blend of reminiscence, satire, keen observation, ability to have you right there during his experiences, and his very wide data base.

The book’s 15 chapters deal with separate topics. Unable to resist the title I started with the last, “A Reader Writes”—and was hooked immediately. Here, Aston has managed to distil the estimated 7,000 car magazines he’s been reading since 1967 when he was 15 with the essence of a lifetime savoring his favorite writers. They come back to life despite the dross they may have had to admire. “… in the pages of Autocar and Motor it was forever a sleety monochrome day in 1957. And in Motor Sport it was forever 1934, as every copy would feature some esoteric piece from editor Bill Boddy about the place he always called The Track: Brooklands.”

Chapter 13 deals with the author’s own reportage, here of the motoring events in the year AD 2017, from March, with snow still on the ground, to October with snow already on the ground. This involved 5,000 miles and 120 hours of driving to hill-climbs, drag strips, trials, rallies, sprints and racing circuits. He interviewed spectators, marshals, organizers and competitors, and his impressions following each experience include “nature notes” (no global warming denier, he) and “catering” as well as the categories to be expected.

If there is a “problem” it is that so many passages just beg to be read out loud, to anyone within earshot, which may well be considered an imposition by those whose minds are on other things. It enhances the experience to be of a similar “vintage” to Aston (b. 1952), not only in regards to the people, places and machinery he ticks off but in the way he weaves them together, from hill-climbs to F1, the local backwater to the global racing scene.

We made reference earlier to the depth of knowledge Aston has on tap. The book is chock-full of it; there are 272 pages of, say, 600 words each—no illustrations and the layout as straightforward and … how to say it … unvarying as can be imagined—and the type size microscopic. Meaning, the mechanics of the reading will be a burden to tired ole eyes.

Also, a good map of the British Isles would be handy, as well as references to sources that identify the wide variety of cars and drivers encountered. (There is an Index.) It’s never too late to learn, but you’ll have to look for such aids elsewhere.

Let’s poke around in the book at a more leisurely pace. Aston started as a diffident teenager in Yorkshire, and volunteered to marshal, beginning with the Royal Automobile Club’s 1969 event; 160 entries, 73 Special Stages, and he and his friends helped with laying out directional arrows and other signs on a 20-mile Stage before the competitors’ arrival from 11:45 pm. Sorry, another quote, as he brings to us his memory of an event fifty years ago: “…car 9, Hannu Mikkola’s Escort, arrived, insanely sideways, hammering and barking that twin-cam song. He slid broadside, ran out of opposite lock and instantly went from ace to accident as the little white Ford rolled on its left side and disappeared into the trees, engine silent but branches snapping and crackling as the car crashed violently in front of our disbelieving eyes, the consequence of a maximum attack strategy. Suddenly we were no longer spectators but players, running over the forest road, somebody’s whistle sounding, senior marshals shouting and torches flaring in the dark. Co-driver Mike Wood was lucid and calm but Mikkola was dazed and – yes – confused. We asked if he was okay, he mumbled incoherently – in Finnish, English, or a combination of the two – then he wandered back on to the stage, where older and wiser hands took charge…” There had been no application forms or parental consents required, and the day of training a year or so later followed marshalling at a wide variety of events. The reader can almost experience the long days following very short nights necessitated by travel to distant events, frequently by public transport; the discomfort caused by the frequently lousy weather; and the bad food and coffee available in the England of those days. John Aston’s (what better name for a British enthusiast?) exhilaration comes through very strongly.

Britain it may have been, but there is also a vivid account of Mr. and Mrs. Aston’s travels in America, with the subtext of a deep knowledge of Americana gleaned from voracious reading, watching and listening, culminating in a NASCAR weekend.

Marques? Colin Chapman’s creations and Enzo Ferrari’s are mentioned most often, whether for road or race, and Aston has enjoyed a series of Caterham Sevens, the authorized descendent of Chapman’s original Seven, often sold as a kit car to avoid the then punitive British Purchase Tax. Club Lotus has its magazine aptly named Low Flying and Aston is a frequent contributor to it. The cover of Driven is a clever impression of a “flying” Seven pursuing a Grand Prix car of the 1970s and Mark 1 Lotus Cortina through the Scottish landscape which Aston celebrates so vividly.

A chapter with the title “Refuge of the Roads” (sound familiar?) describes vividly the feeling of Aston escaping workday stresses to the Scottish Highlands, driving his Seven to a flyfishing break on his favorite roads. Your reviewer drove many of them fifty years ago, but in a rental Hillman Minx. That was the cheaper and nastier version of the Hillman Hunter sold in my native New Zealand and in Iran as the Paykan. It lacked a front anti-sway bar so that the bump steering induced on a fast bend near Glencoe would have killed its along with any occupants of an approaching car, had there been one. Many readers will find parallels in their experiences.

In the Foreword to one of the late New Zealand/Australian writer John Clarke’s books he assured us, “The opinions expressed in this book are bloody good ones,” and so it is with Driven, where Aston’s often trenchant criticisms are expressed without the fascistic blather of another writer and television presenter afflicted by huge budgets, also born in Yorkshire, but ten years later.

Shelby American Up Close and Behind the Scenes »
« Michigan’s C. Harold Wills