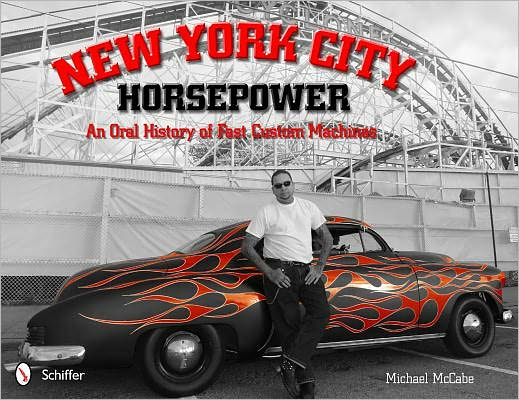 “Reality television productions have keyed in on the intimate relationship between America and its machines. These shows are made as mass-market dramas that miss the point for the most part and clumsily exploit a mixture of sensibilities which bounce between weekender store-bought superficiality and dedicated, original ground-up building.”

Probably best to begin with a sentence from the very end of the book because it neatly summarizes the author’s own take of a book that is otherwise difficult to get a handle on: “Styles emerged in the five boroughs that reflected the racial and ethnic diversity of the people living there, and over time notable creative innovators established nuanced reputations.” No reason to argue with that but McCabe does not make it easy for the reader—even one who is inclined to accept his presupposition—to grasp just what it is that makes an East Coast bike or car different from a West Coast machine.

Neither McCabe nor the 40-odd custom builders he interviewed for this book are specific about this distinction even though some of them actually hail from the West Coast. It is relatively self-evident to see the logic in building bikes that have to contend with New York City road and traffic—and weather—conditions a particular way: narrow width to squeeze through dense traffic, suspensions and steering forks suited to pothole-riddled frost-cracked roads etc. etc. It gets much harder to apply such “objective” criteria to cars and all one is left with is the rather more vague approach of looking for “esthetic” differences.

McCabe presents himself as an “urban anthropologist, writer, and photographer.” It doesn’t say so here but he’s also a tattoo artist. His previous three books explored the subject of tattooing in the US, Japan, and Indochina (same publisher) and speak to his interest in, for lack of a better word, fringe activities. Plug yourself into the NYC street chopper scene and you’ll quickly find, even right now today, a distinct “left coast envy” that one is hard-pressed not to perceive as an inferiority complex. If nothing else, the book shows, even if it does not explain, that this is unnecessary.

Everything in the book, from the colors to the graphics (every page is printed on black paper looking like asphalt) to the commentary, plays up a certain grittiness. This too seems unnecessary. The very “hardcore / outlaw / counterculture” tone makes the NYC custom car scene appear seedier than it is. The book closes, for instance, with a chapter on the White Knights (and their brainchild, the Brooklyn Invitational bike show) featuring five of its members. Naturally the unsuspecting reader would take this to be a motorcycle club—with all the baggage that accompanies such an assumption—when, if anything, it is a “collective” of friends with common interests in [fine] art, bikes, music, and riding together.

Conducted over the course of one year, McCabe’s interviews seek to showcase the connection of the present to the past: “I decided to explore this process and to put everyone’s histories into a sequence of time form oldest to youngest.” Perhaps we are overthinking here but looking at the names it is not at all clear if he’s talking about date of birth, time in business, or presence in NYC. His first interviewee, Joe Serino Sr., is arguably the oldest in all three regards but his last, Bobby Garey fits none of them. And to further illustrate the earlier point about “grittiness”: would it have robbed Garey of his street cred to mention that he is an accomplished muralist with public works in several states?? His biggest NYC project is a section of Penn Station three football fields long for which he oversaw 12 artists for a year. And, after 26 years in NY, Garey just returned to his native South Carolina to tend to his elderly parents. Probably not “outlaw” enough to be worth mentioning? What this long-winded speech means is that the book has a distinct angle, probably too much so.

Illustrated with almost 800 period and current photos the interviews contain biographic notes and talk about influences, philosophies, techniques, and select projects. On that level, and without any particular hook on which to hang it, this book clearly fills a gap and is a fine exposition of the variety and creativity in the custom car/bike scene practiced since at least the 1940s in New York and Jersey. From pro builders working out of their apartments to hole-in-the-wall shops to big shops with gee-wiz tools and gadgets, even natives may well be surprised at what all goes on in their neighborhoods! The stories obviously also touch upon lifestyle issues, illegal street racing, car clubs, and shows etc. No addresses (good luck finding some of these folks if you don’t know which tree to shake); no index.

100 Years Ago, Anniversary of the Armistice »
« The Singer Story: The Cars, Commercial Vehicles, Bicycles & Motorcycles