Classic Cars: How to Choose Your Dream Car 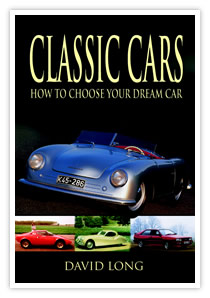 At last you’re flush with enthusiasm, flush with money too, and everybody at the pub talks about “them classic cars” and that “they don’t make ‘em like they used to!” You too will have a classic car. But you know nothing about the species . . . You, dear fellow, are the sort of reader this book aims to enlighten.

For everyone who is already into classic cars, this book is probably a bit too rudimentary. Not that is isn’t always entertaining to look over the shoulder of someone who has driven over 2000 models of all eras and earns his keep writing about them.

Long, a motoring journalist, contributes to papers and magazines in the UK and elsewhere and has written/ghost-written several books in several subject areas, from English Eccentrics to Rogue Architecture to—Classis Cars. Varied interests make for a varied frame of reference; one can only hope that they don’t also result in a weakening of focus or superficiality. And, as the review will lay out, there are enough niggling bits in this book to make one fear the aforementioned Eccentrics were leaning on the tiller a bit too much.

Written in a rather conversational style, the first 30 pages lay out the preliminaries: by what parameters is a car decreed “classic,” what is the elusive x-factor that makes ostensibly similar cars different from another, how do you find one, evaluate it, pay for it, insure it etc. To some of these topics the caveat applies that this is a British book and relates to British conditions. There are, incidentally, also quite a bit of cultural references, even turns of phrase, that are distinctly British and likely lost on anyone else. This part of the book is illustrated with random photos of random cars; they are uncaptioned and thus tell the novice—nothing. It is also home to several sidebars presenting factoids on movie cars, celebrity cars, a light-on-facts automobile timeline and assorted other trivia.

The bulk of the book is devoted to 50 cars selected by a criteria so arbitrary that we had better quote the author to explain it: “. . . they represent a selection of enduring classics of the sort which seem always to find willing buyers whenever, and for whatever reason, their owners decide to pass them on.” All right, so that is the common denominator of a low-brow 1961–92 Renault 4 and a blueblood megadollar 1925–39 Alfa Romeo 6C or 8C? Why cast such a wide net? The latter would hardly be a novice’s first purchase and the seasoned collector would hardly give this book shelf space.

The cars are presented in alphabetical order by marque but within a marque not in chronological order. Cf. the 1907–1925 Rolls-Royce Silver Ghost (which strictly speaking is a 1906–26 model) is described after the 1955–1965 Rolls-Royce Silver Cloud. Fine, but why such unorthodoxy? The two models hardly appeal to the same buyer, being separated in price by several hundreds of thousands of dollars and totally incompatible requirements in terms of driver’s skill and lifestyle. Likewise the car descriptions themselves portray an ever-changing level of magnification: whereas the pointers on the Silver Cloud include such pertinent minutia as the location of likely rust spots the Silver Ghost description is a perfunctory history lesson on the most superficial level with not a single item related to car use or desirability that a prospective buyer would benefit from. Nor is there even a mention of the fact that there were American-made Silver Ghosts for several years and which have totally different specs and roadability. Long story longer: either we are overthinking this or the book really doesn’t have a “method” or dare one say, point. Presuming that the author wrote this book for someone with a budding interest in classic cars, won’t just such a reader too seek for the connective tissue in these descriptions?

Each car is illustrated with one to several photos, again uncaptioned. For no discernable reason, two VW models are separated by a photo of a Cadillac Eldorado. One random page shows two photos of a Toyota 2000GT—a car that is not mentioned anywhere. Even if this was done from a legitimate desire to “fill up” space, doing it in this capricious a manner is amateurish, or indicative of taking shortcuts, and certainly not with the best interests of the reader at heart. Add to that a bunch of typos and you’ll be asking yourself why you should part with your hard-earned money.