Art of the Harley-Davidson Motorcycle 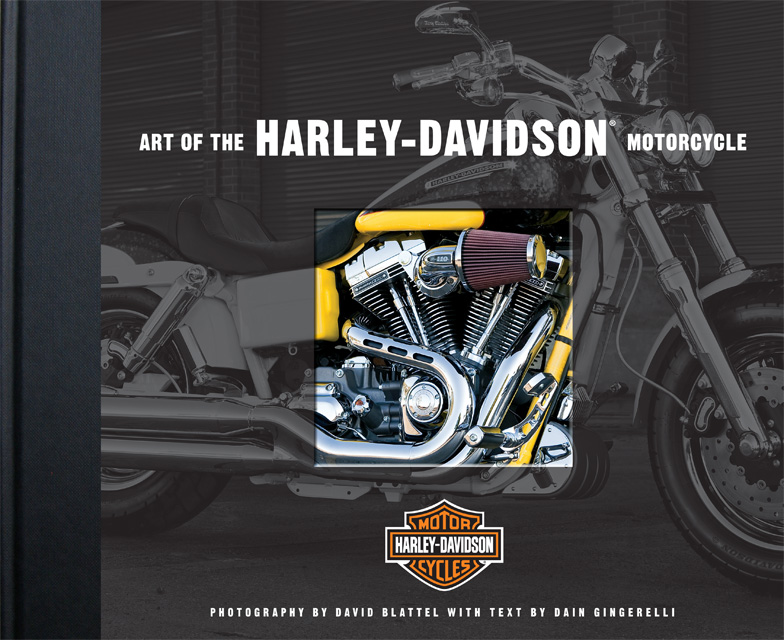 “There were no demographics to speak of, either, so they developed their motorcycles based on intuition and what they felt would work best. Some of those early motorcycles were resounding successes, others dismal failures.”

This is first and foremost a photo book so we’ll start the review there. If you’ve had Harleys on your brain for a while it is almost not possible not to have encountered photographer Blattel’s images before. For five years, beginning in 1989 and 10 years into his professional career, he shot the official Harley-Davidson Motor Co. calendar and for many more years his photos have appeared in motorcycle-themed calendars for several publishers. And even though he’s been at it for over 30 years he was still “ecstatic” when Motorbooks asked him to do this book.

Likewise, fellow Californian “Daingerous” Dain Gingerelli has been writing articles and books about bikes, and cars, since the 1970s (and racing them, hence the nickname). Relevant to this particular subject is his editorship of several H-D enthusiast magazines, his fine 2010 book Harley-Davidson Museum Masterpieces (ISBN 978-0760338940, same publisher) and, not least, his ownership of a Sportster he modded into a cafe racer.

Eleven chapters of this “officially licensed” book present a photo history of H-D’s 1909–2011 road bikes (including police, military, customs), divided by type and within that, by year. The text summarizes basic background and vital stats, accompanied by a more or less uniform set of four specs (cf. displacement, transmission, weight, wheelbase, seat height, compression etc.) and something called “lore” that offers tidbits about the model.

Neither the old hand nor the newcomer to the marque will be disappointed by the selection of models although the reader with specialized interests will note that while road bikes with sporting ambitions are part of the line-up, outright competition bikes are not covered in as great detail. Entirely omitted are examples of the Buell brand (founded in 1983 by ex-Harley-Davidson engineer Erik Buell and owned by H-D 1993–2009 and which had contributed 136,923 bikes to the bottomline) or the early 1960s–late 1970s Aermacchi-built Harleys.

The book is not just a showcase of H-D’s “greatest hits.” Among the 100-odd bikes that are covered there are a handful of decidedly unusual machines rarely included in H-D books and probably rarely even remembered by or associated with H-D by the general public. Each bike is given 1–2 pages and about 200 words of historical/technical text. Almost all of Blattel’s 104 photos are shot from the right—the “pretty”—side and quite a few are accompanied by one smaller photo (not always related to the principal bike) showing either a close-up detail, period ad/photo, or magazine page/cover. The book, incidentally, is in landscape format and has a flat spine which means that some detail in those photos that go across a spread is lost in the gutter. In something as compact as a motorcycle this inevitably means that some important bit of the apparatus has disappeared. All the vintage and classic bikes are in restored or exceptional original condition.

The book is designed and printed with great attention to detail and impressive paper and photo reproduction quality. Consider, for instance, the front cover: the greyscale photo has a cutout that shows the heart of the same bike—the engine—in color. Not cheap to do!

It should be pointed out that Blattel’s photos are not of random bikes in random places. In each case he specifically looks for a location that “fits” the bike. Budding photogs may want to first read his notes (p. 188), but don’t expect any great revelation of tricks of the trade here. All Blattel will say is that he “can feel it” when the combination is right.

The bikes’ owners are listed and there’s even an Index (of people and models; but no reference to Porsche’s role in the V-Rod’s 60º water-cooled motor).

Art of the Harley-Davidson Motorcycle