Ask the Man Who Owns One: An Illustrated History of Packard Advertising 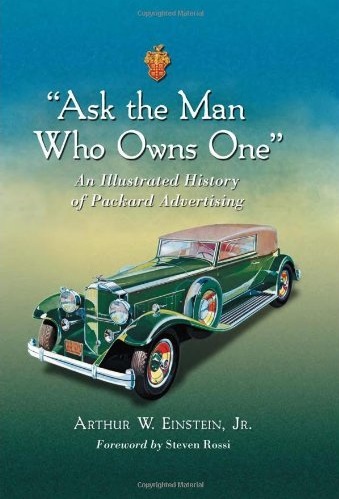 Even if this book were only about the advertising, as the subtitle suggests, it would be a most interesting addition to the literature because in terms of esthetics and message Packard’s advertising was no less distinctive than its cars and is certainly worthy of an in-depth look. But Einstein casts a wider net. The matter of advertising is inseparable from the philosophical stirrings within a company, its values, and its own vision of its place in the world, not to mention the integrity of its product and people and the overall zeitgeist in terms of economics and politics. And then there is the chicken/hen aspect: does advertising “make” the product, or vice versa? Einstein doesn’t get into the latter aspect although as an ad man himself he probably has his theories.

“The Packard slogan ‘Ask the Man Who Owns One’ was as persistent a presence as the distinctive shape of the grille. It is among the most memorable advertising lines ever written, and one of the smartest.”

Packard history is marked by a touch of the ironic. Unlike so many of its peers, the firm survived the Depression era—only to fail 20 years later, in 1958, during the greatest car-buying boom the US had ever seen. The 1954 merger with Studebaker was more of a liability than an asset. Ask the Man Who Owns One? Few did and fewer cared. To add insult to injury, low-end Nash and Hudson were amalgamated into the AMC family were they would survive another 34 years until taken over by Chrysler in 1987. In 1995 the rights to the Packard name were acquired by a private individual with an eye towards resurrecting the marque. His 1999 one-off V12-powered luxury sedan looked like nothing else on the road and while it was shown at the 2003 Pebble Beach concurs, ended up on eBay in 2009, the project has been scrapped, and the name is for sale again. ($1.5 million. Anyone?)

While peripheral to this book it should be pointed out that as principal of his own NYC ad firm, Einstein handled SAAB advertising in the 1980s, which, you will recall, was distinctly different and boldly cerebral. This is a footnote to the point that Einstein was a “car guy” before he became an “ad guy,” growing up with a Packard 120 in the family and thinking about the bigger issues of history and sociology already in graduate school where he wrote a thesis that is the basis for this book. (Since the whole purpose of our SpeedReaders project is to show that “everything is connected,” we should mention another Packard that would have impressed young Einstein mightily, a 1940 Darrin convertible near his grade school that belonged to the Argetsinger family, probably Cameron who would become a founder of the SCCA.) When Einstein wrote his thesis (Michigan State) many of the Packard people who had handled advertising and promotion since 1914 were still alive and he was able to interview these primary sources.

After laying the groundwork by describing the very beginning of commercial automobile manufacture in Europe and the US and introducing the Packard family from which the brothers James Ward and William Doud would spring, Einstein sorts out various myths related to the Packard firm’s reasons for being and its intentions. Realize that this part of the story is told merely to establish context and is thus rather brief (no mention of the NY auto show, transcontinental trips, etc.).

The book only presents print ads (Packard did advertise on radio and later TV as well) and only from US publications. From the first known Packard ad in 1900, the company positions its product as “a gentlemen’s car, built by gentlemen.” Especially at this early juncture in the book it would have been useful if the author showed more examples of other makers’ ads, and commented upon them, so as to enable the reader to gauge if and how the tack Packard chose to present its wares to the public was different. Another useful touch would have been to identify the publications in which the ad appeared.

No specific attribution for the slogan that is the title of this book is given but Einstein speculates that a journalist or professional PR person may have tweaked a remark James Packard is said to have dictated to his secretary in response to a customer inquiry for company literature. What is certain is that it first appeared in print in 1901, but almost as an afterthought, without its full allure being realized yet. Again, the reader is reminded that the author is himself an ad man. His experience with budgets, attitudes, and psychology allows him to make informed guesses where the lack of memoranda or the like prohibit definitive knowledge of the origins of an idea. By considering he choice of publication, size of ad, use of original artwork etc. Einstein charts the incremental switch from engineering-driven just-the-facts ads to more emotive ones. The farther we advance into the ensuing years and the more artifacts from it survive the more the story gets into the particulars of the advertising campaigns and the people behind it. From verbiage to typefaces and artwork to print runs, Einstein shows an ever more confident advertiser. In its heyday, Packard would not even deign to mention their own name in the ads—if you needed to be told you were looking at a Packard you were unworthy of owning one!

A large number of photos accompany the text; all color images are bundled into one 16-page section of full-page ads. The book also describes examples of WW II ads relating to military and industrial uses of Packard products. Appended are a list of 1903–1957 Saturday Evening Post ads by ad agency and publication date and examples of references to Packard in song and literature. Extensive Chapter Notes, a Bibliography (books and magazines), and a short but adequate Index round out the book.

This is a highly original look at an otherwise well documented marque. Regardless of its Packard focus, the book is full of insights into a specialized area of endeavor that people outside that profession are not normally privy to.

Formel 1 / Formula 1: Pictures With a Message »
« The Beauty of Time: The Watches of A. Lange & Söhne