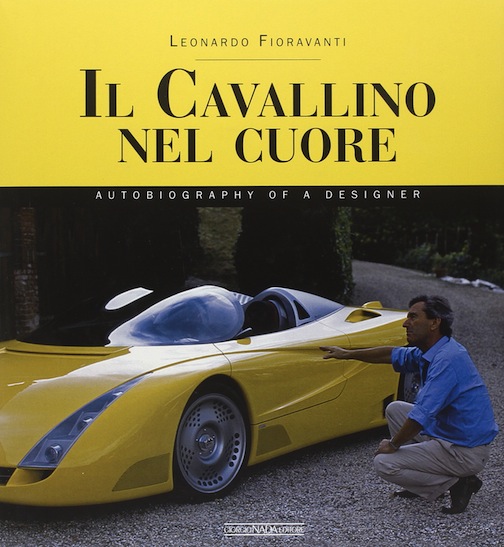 “Having been fortunate enough to have designed and drawn a number [of cars], some of which have become famous around the world, I feel that I’ve been a part of [a] story lasting over a century that still represents the most important human activity in social and economic terms.

I will try to tell my story as a designer as I feel I’ve almost got a duty to testify that realising your dreams is at least possible, albeit rare.”

Some of those “famous” cars the quote hints at: Dino, Daytona, F40, P5, P6, 512, 365. And those are just the Ferraris! Transliterated the book title means “a soft spot for the prancing horse” and refers to Fioravanti’s life-long love for the marque and, if not love then certainly respect, for the man.

The handwriting on young Fioravanti’s pencil sketches may look juvenile but the detail in his drawings shows an eye for mechanical arrangements, integrity of line, and perspective and proportion utterly belying his age. It also shows a definite esthetic: “My passion had become so intense that when a big truck rumbled and bounced along Viale Romagna I instinctively averted my gaze so as not to see its dark and probably unaesthetic underparts!” Some kids think they know their cars if they can tell make and model by the overall shape of a car or its sound or some obvious design feature. Fioravanti (b. 1938) and his schoolmates made a sport—he calls it a competition—out of looking at photos and telling from the smallest detail—a type of screw, the shape of a turn signal bezel—which car they were looking at.

His youthful obsessions included the firm resolve to one day work for Pininfarina, no matter that his parents put the brakes on in the form of “memorable shouting matches and punishments.” He did join Pininfarina, fresh out of school, as a junior stylist—and rose to Managing Director, then moving on to deputy General Manager at Ferrari, Director of Fiat’s Centro Stile, and Chairman of ANFIA Car Coachbuilders Group 2009–11. And these are just the highlights. If automotive style/styling, the designer’s process, the Italian car scene at a pivotal phase, or postwar motorization are of interest, you will not want to miss this book.

If only everyone who advanced the goalposts as much as Fioravanti recognized that a biography—provided it is not a vainglorious or self-righteous puff piece—is an essential piece of the puzzle, the world would be a better place. An autobiography, as this is, can easily go off the rails in that regard but Fioravanti appears to have no axe to grind, scores to settle, appeals to make. All that a co-author or editor could have added would be to flesh out certain details in regard to context or background for readers not familiar with Fioravanti’s era and circumstances.

This is a lovely, important, and superlatively illustrated book, written with a certain self-deprecating wit, rich in detail, and a soup to nuts story arc from youth to recent/current activities. Which makes it all the harder to have to report, duty-bound as we are, that typos (mostly missing words or possibly translation-related glitches) are rampant.

Generously sized, the book features hundreds of illustrations, among which design sketches, technical drawings and photos of styling bucks and studies, many not previously published. Appended are a list of 1965–2008 Ferraris “designed and overseen” by Fioravanti, 308 and 365 family trees in photos, and the design of his firm’s logo and then patents he holds. As is typical for this publisher there is no Index, a particular shame in this case because it would make the vast quantity of names and cars etc. mentioned accessible to those readers who are less interested in Fioravanti but need the book as a cross reference for other topics.

From the first page to the last this is a fine, engaging book. Given Fioravanti’s specialization in aerodynamics, having the Ercole Spada biography at hand would seem a natural choice.