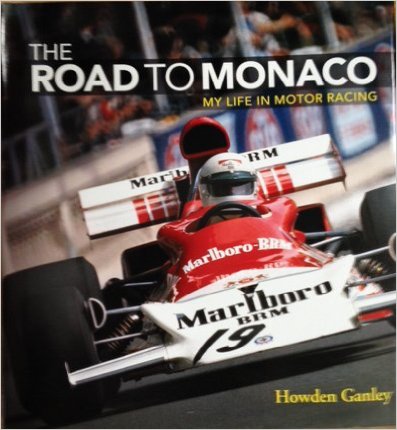 In the interest of full disclosure, I will start off by saying that I think this is one of the best books written about racing. I would add that I’m not just a gearhead who wants to feast on racing stories from a colorful era that was equal parts exciting and dangerous, I am also someone who enjoys reading a story that is compelling in nature. The Road to Monaco could be called a Horatio Alger story, an accounting of an athlete’s career, or even a textbook example of an individual’s triumph in an over-the-top competitive endeavor. However, categorizing it as such is too limiting. This book is a life journey.

There are very few people who could write a book like this. In fact, author Howden Ganley (b. 1941) may be the last of them. Certainly in today’s world I doubt we will see somebody make the transition from F1 mechanic to F1 driver as he did. After a brief career as a journalist, Ganley left his home country of New Zealand in 1960 at the age of 20 having done a fair amount of racing in his parent’s Morris Minor and, later, his own Lotus XI and set course for England with the intention of working and competing in motor racing. He arrived with £25 in his pocket and little else. After working for a couple of rather eccentric employers, he settled in as a gopher at the fledgling McLaren Racing. Not to spoil the story, after all the journey (there’s that word again) is more important than the destination, but 25 years later he had achieved success at the highest level of the sport—an F1 driver for BRM, Williams, March & Maki, a factory Can-Am & Interserie driver, a factory McLaren F5000 driver and an endurance sports car driver for teams such as Matra and John Wyer’s Gulf Mirage team, PLUS he had become a race car manufacturer in his own right as well as a Director and Secretary of the BRDC. My point is, if those accomplishments alone do not make for a potentially compelling book if properly told, I am at a loss for what would.

Ganley delivers the goods with typical Kiwi restraint and low-key delivery. No punches are pulled regarding the cars or the people involved in the sport. The fact that it was an incredibly dangerous period of racing is certainly not ignored, nor is the effort involved in trying to reach the top, but the enjoyment and in many cases the humor that come with it are also presented. An attempt to reset the telltale after he or his teammate had inadvertently over-revved the motor results in Ganley’s glove getting stuck behind the dashboard of his Mirage—at 200 mph at Spa. All this to avoid the negative reaction from team manager John Wyer—a man not known for his warm and fuzzy nature and aptly nicknamed “Death Ray.” Or what about Peter Revson’s double-take on the victory stand at the 1971 Riverside Can-Am when he saw his “mechanic” of four years earlier up there next to him on the podium?

The Road to Monaco is littered with wonderful backstage stories about the teams already mentioned as well as lesser known parts of racing lore. The first McLarens, the lightweight Ford GT nicknamed Big Ed, the six-wheel March 2-4-0 F1 car, a McLaren M8 with, shall we say, a sponsor less than acceptable to your average audience, the Maki F1 car, plus it even includes a rally in a Citroën SM! The same thing goes for the people the author met on his journey. As he readily admits in the book, his career was in large part due to Bruce McLaren, but the other larger-than-life people he encountered along the way made a colorful contribution and helped complete the story, Tony Southgate (successful and prolific designer for Lotus, Shadow, BRM, TWR Jaguar and more), “Big Lou” Stanley at BRM, Max Mosley from March (later FIA President), teammates like Pedro Rodriguez, Peter Gethin and Jo Siffert, the aforementioned John Wyer—the list is long. Even Ganley’s departure from BRM after the 1972 season in favor of the Williams team had an interesting side effect because it allowed Nicki Lauda to join BRM, but that’s another story entirely. Lastly, the delicate way in which the author deals with the passing of his wife, Judy, due to cancer is testimony to his skill as a writer and his devotion as a husband.

My only reservation would be that I wish the author had expanded the post-driving career section, in particular the period involved with manufacturing Tiga Race Cars, formed by Ganley and partner Tim Schenken. Ganley was the designer and to get a look into a designer’s mind is always a treat. Perhaps this will be for a future book.

The author has done an admirable job of weaving all of these diverse elements into a smoothly presented and entertaining story, balanced with loads of photos that provide context. Warning to the speedreader: take it slow because a lot of details will flash by unnoticed if read without care. You could miss a lot of the fun.

The Road to Monaco works on so many different levels that it ought to appeal to many tastes, however I would recommend it simply as a fascinating story of a life very well lived.