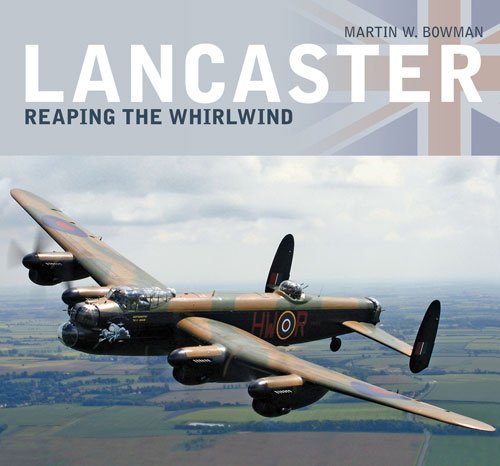 “‘The ‘Big City’ now referred to as ‘Chop City’ by some. God, the losses over Berlin! Seem to remember that over four raids at the beginning of the year, 158 kites bought it. A slugging match of night-fighters all along the route with even more over Berlin itself: and the heaviest concentration of flak in all Germany.’”

This 2012 book was just reissued as a softcover (2/2016) so someone must think that of all the Lancaster books by this author—and this publisher—this one merits special attention. It does have at least two features that set is apart: some 50 color photos and extensive commentary from aircrew.

Bowman, with 150+ books to his name, obviously has a well-honed method for doing research and structuring a book so one must assume that doing this book this way was what he intended. It is almost exclusively told from the operational angle, and in the most literal sense of flying and otherwise manipulating the aircraft rather than the tactical sense of “air operations.” So much so, in fact, that when the publisher touts in the press release a “condensed history of the Lancaster’s construction” one wonders if they are thinking of a different book. What few morsels there are about the Lanc’s specs and features are scattered far and wide, most of it found on a 2-page timeline that starts the book off. There we find, for instance, one of the few references to the Lancaster being derived from the Manchester III, an aircraft that was so unsuccessful that it would pretty much be entirely forgotten were it not for the lessons learned and applied to what would become one of the best-remembered aircraft of all time.

Readers who know their way around a WWII bomber will appreciate the detailed first-person accounts of handling the large machine, how the controls feel, how the crew worked, and airfield procedures or flying in a large formation. It helps to either know—or not care about—British/Commonwealth military ranks as none of the abbreviations are spelled out or a Glossary offered. Even some of the pilot jargon may not be relatable to all although context should provide sufficient clues. Bowman has himself flown in a Lanc so at least he will have known what’s what.

What all this means is that this is not an ideal starter book, but then there are piles of those already. Newbies will also not get a balanced sense of the overall strategic picture but that too has been covered elsewhere.

The bulk of the photos is of aircraft and crews, with the occasional gem such as clearing snow-covered airfields or Royal visits or wildly shot-up Lancs limping home. Diary entries, interviews, letters, and recreated or imagined dialogue provide a sense of “being there” and in that regard the book really does offer a vivd snapshot.

A few data points buried in Appendix 2 reveal to the reader who bothers to pause and think a key talking point: statistics of sorties flown vs. losses incurred quantify the Lanc’s stellar performance, with only 2.2% lost and .16% crashed (compared to the Manchester’s dismal 5.04% / .95%).

The Index appears to list only proper names, locations, and aircraft nicknames (in keeping with the book’s focus). With the recent historic visit of a US President to Hiroshima a few paragraphs towards the end of the book (p. 202 ff) take on timely relevance: “could the Lancaster have dropped the bombs that ended the war?” It should be remembered that there were no aircraft in the US inventory that had bomb bays large enough to accommodate a 17-foot bomb (the B-29s had to be specially modified).

For completists this is most definitely a necessary book, photo buffs will savor the color—and everyone else will just have to wing it.