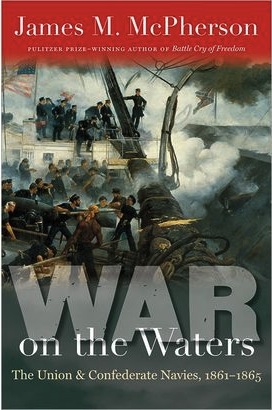 “The total military expenditures of the U.S. government in the Civil War were $6.8 billion. Of this amount, the navy cost $587 million—one-twelfth of the total. By any measure of cost-effectiveness, the nation got more than its money’s worth for this one-twelfth.”

To manage to successfully cover the naval aspect of the American Civil War, both the Blue Water and the Brown Water campaigns, in less than 300 pages is quite an achievement. That it is Pulitzer and Lincoln Prize-winning James McPherson who does so should not be that much of a surprise, given that he is the author of what is still the best one-volume history of the Civil War, Battle Cry of Freedom: The Civil War Era (Oxford, 1988).

Often given short shrift when the American Civil War is discussed, the naval activities of both the Union and Confederate forces often played important, even pivotal roles in the conduct of the war. The blockade of the Southern ports and the seizing of coastal areas in the South Atlantic and Gulf regions—and the attendant liberation of the slaves living in those areas—get their due, just as the challenges of the Brown Water campaigns on the Tennessee, Mississippi, and other rivers also receive theirs.

With a deft hand, McPherson covers the challenges both political and military that the Secretary of the Navy, Gideon Welles, and his Confederate counterpart, Steven Mallory, had to deal with over the course of the war. There were many such challenges, ranging from the conversion from sail to steam to the constant, unending political bickering that often involved questions involving personnel and strategic issues. This context, which weaves in and out of the larger story, adds greatly to the reader’s understanding as to why certain issues were handled the way they were.

While scarcely offering a blow-by-blow account of each and every naval engagement during the war, McPherson does provide coverage of the important naval engagements that occurred. The development of the steam-powered gunboat and the submarine, as well as the role of the “torpedo” (the mine) are covered with enough detail as to allow even the most general of readers to easily appreciate their importance.

That the Union naval forces were to be triumphant over those of the states in rebellion was not necessarily a given in 1861. The blockage of the South Atlantic and Gulf ports was scarcely more than a notion during the early months and even years of the conflict. However, as time passed, the Union Navy became more and more effective at intercepting the blockade-runners, the strategy making it difficult for the Southern states to import or export much-needed products to further the war effort. The importance of the New Orleans, Port Royal, Mobile Bay, and Fort Fisher campaigns becomes evident as McPherson shows how the Union naval forces finally succeeded in closing down the Southern ports.

There are few authors who are better at distilling the complexities of the American Civil War into forms that both the general reader and the experienced historian can equally enjoy. McPherson who has honed his craft teaching US history at Princeton University over forty-two years is one of those rare individuals. Any one of his dozen-plus books on the Civil War era is worth reading and this one should definitely be on your reading list.

Twenty pages of Chapter Notes reveal sources and a 15-page Bibliography will send you on the way to years of further reading. The Index is on the short side but obviously done by someone who had a grasp of what matters. And give a nod to the book designer: take off the dust jacket; the color of the cover boards is no accident!

Posted Under: Biography/ Autobiography, History, Other Genres | Author: Donald Capps | No comments yet