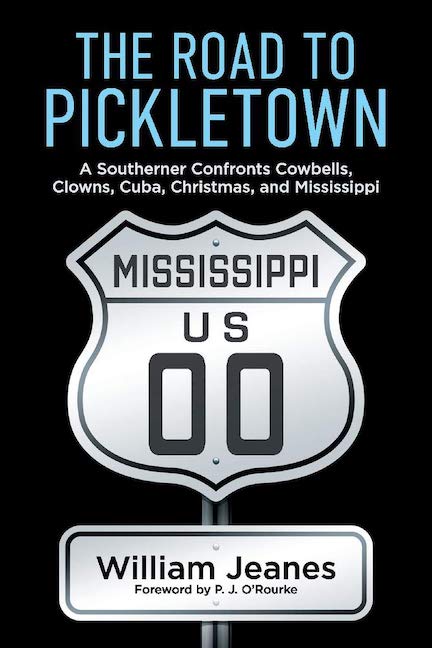 There’s not an over abundance of “car” in this particular book written by William Jeanes in spite of there being a huge amount of “things automotive” in his background. Consider: Jeanes went from freelance contributor to staff writer to editor-in-chief of Car and Driver, followed by being the group publisher for both C/D and Road & Track. He co-authored the 2006-published Branding Iron which was a critique of the auto industry’s advertising and a litany of its foibles and outright blunders.

This book, however, is a collection of columns that Jeanes has written for non-automotive publications for which he also wrote. The columns assembled in The Road to Pickletown appeared mainly in a weekly Jackson, Mississippi newspaper called The Northside Sun, but there are a few from the Corinth, Mississippi newspaper the Daily Corinthian, as well as the Saturday Evening Post, Sports Illustrated and Playboy along with the half dozen from various automotive magazines. Jeanes chose to group the columns into categories such as “Life in Mississippi, History and Nostalgia, Commentary, Entertainment,” etc.

All are personal in some way and taken together, these sixty-one short pieces give the reader the opportunity to simultaneously be entertained and enlightened. There’s a bit of something for nearly every interest and, no surprise, all very well expressed and written.

On the enlightenment side, if you didn’t grow up in the Deep South Mississippi of the 1940s you likely wouldn’t give thought to which professional baseball team the locals favored. Oh, how times and expanding franchises change things. Jeanes’ “home” team was the far off (500 miles to the north) St. Louis Cardinals.

Then there’s the piece written for Playboy. The magazine had sent Jeanes to Africa in 1980 specifically to cover that year’s 27th East Africa Safari Rally of which he wrote: “Rallying may be an obscure undertaking in the United States but it’s Kenya’s Super Bowl and Mardi Gras combined.” And that “Of all the world-championship rallies, few combine the treachery of weather, variety of driving conditions, and hostility of terrain as diabolically as Kenya’s Safari Rally.” Some three thousand miles later, at the conclusion of the Rally Jeanes described himself as, “Tired, battered beyond soreness from hours on the road, sunburned and badly in need of extended sleep . . .”

On the more lyrical side are Jeanes’ descriptions of early morning (read pre-dawn) drives in various cities. Of one he wrote, “. . . it was easy to imagine that we were seeing the Paris of Hemingway. Or of Toulouse-Lautrec.” By contrast, there are a couple of silly chapters that, under the heading of “avoiding clichés” do just the opposite with sentence after sentence, one after another, written by impressively and creatively employing at least three clichés in each sentence.

Several of the concluding chapters that are under the section heading “People” are quite moving, very opinionated, and thus probably ones I shouldn’t be citing here although they do happen to express opinions with which your commentator agrees. Thus I’ll leave it to you to discover what Jeanes thinks about Theodore Roosevelt, the Tuskegee Airmen and more. Hint: it’s well worth your while to read and contemplate his words.

And then there’s the wonderful line at the conclusion of Jeanes’ recollections of his time aboard the USS Intrepid that is music to this working copy editor’s ears: “My sea-story confusion underscores the ineffable truth that every writer needs a fact checker.”

Good short reads on diverse topics. Affordable too plus you get to find out about the title’s reference to Pickletown.

279 pages, no illustrations or index, softcover