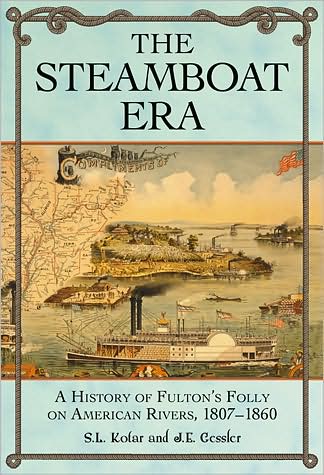 This book would be an excellent encyclopedia for scriptwriters conjuring up a screenplay with a riverboat backdrop. That’s no real surprise, though, because authors Kotar and Gessler are a scriptwriting team, having penned a western TV episode or two themselves. The book is so dense with information that I found myself reading more slowly than usual in order to let the data sink in. This well-written book gets you thinking about the time period in great detail.

The Mississippi river steamboat engraving shown in color on the cover is fascinating to examine with a magnifying glass, telling a story of its own of life on, and along, the river. Good original photos and drawings are woven into the body copy. Inserts quoted from newspapers and books of the day by Trollope, Dickens, Twain and others are quoted liberally in a way that works well with the authors’ entertaining delivery of facts about everything social and financial concerning riverboats. From bar drink recipes to medical practice and costs of riverboat operation, they cover it all—except for detailed mechanical information.

There are no drawings or photos showing the engines or paddle wheel drive train. There are brief descriptions which, while adequate, are insufficient from a “gearhead” point of view. With 24˝ pistons and a seven-foot stroke, a cutaway illustration of the cast iron engines would be fun to see. The steam was generated with multiple boilers mounted on deck, all fired with cordwood. Dual engines and some sort of power transmission system drove dual paddle wheels that could counter-rotate and swing the boat around tight corners or gracefully maneuver across the current when landing or leaving. They had to load up on cordwood every 30 miles or so, and blew up most often when backing away from the landing with the boilers low on water. The passengers would tilt the boat by all running to one side to wave goodbye; the water in the boilers would then slosh up the side and flash into more steam than the boiler could hold, and explode.

Fascinating details of the cholera epidemic of 1832 are given, and all the ebbs and flows of the financial panics of 1819, 1832, 1837, 1843 and 1857 and the inflation, deflation, popular movements, bank failures, and freight rate drops that resulted. Who owned the boats, and wage rates are discussed, along with how the railroads eventually put a stake through the heart of the riverboat industry. And the river was a busy place. In 1847 steamboats made 4,300 trips on the river, so traffic was not light, particularly if you factor in all the flatboats, hulls, canal boats, and keels using the water at the same time. With no regulation of any sort, the river was a game of anything goes as long as it worked. Riverboat gambling perhaps sums up the entire culture.

Unfortunately, there are a few “computer typos” where everything is spelled correctly but the sentence just doesn’t make sense. A quick example: “. . . on a weekly, twice weekly, or weekly departure.” I’m also suspicious of some of the statistics. The authors state that on average a steamboat operating between Baton Rouge and New Orleans (a 135-mile trip) landed 1,025 times during the journey. Really? Land every .13 miles? That’s seven landings a mile for 135 miles. Doesn’t sound right to me. They also have a habit of reusing expressions like “gangplanks casting the unwary into the muddy waters below” a bit more often than they should.

But beyond all of my niggly editorial backbiting the book is a good one and well worth owning. If your interests run to boats and American riverboats in particular, then this is a “must buy.” All the terms of river boating, all the dangers, all the shady business practices, everything relating to river travel are included and listed for your perusal. Ripples, rapids, reefs and snags are covered and defined, and the glossary is worth reading just for the slang and terminology used during the 1807–1860 time period.

The book consists of a quick Dedication, Acknowledgments, Table of Contents and a Preface, followed by 23 Chapters starting with “The ‘Invention of the Devil’” and continuing on through “Economic Conditions During the Steamboat Era,” “Man Overboard! Steamboat Disasters on Western Waterways,” “Nameless Masses: Deck Passengers,” and “(In)Famous Steamboat Cities.” As mentioned above, Appendix A is a glossary well worth reading on its own for the terminology of the times, while Appendix B is a 10-page list of “Original Accounts of Steamboat Disasters,” followed by Chapter Notes, a Bibliography and a very small but surprisingly effective three-page Index.