The Onion Book of Known Knowledge 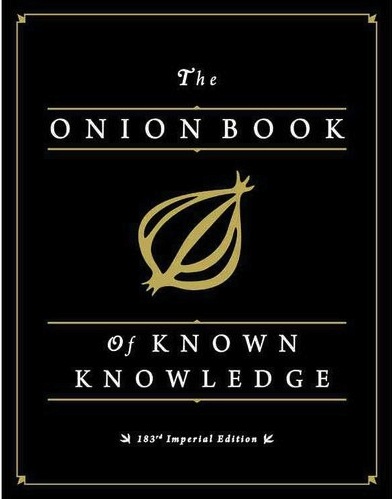 Gotta love The Onion. From its humble beginnings in 1988 as a satiric newspaper founded by two juniors from the University of Wisconsin to its current status as a modest media empire—the newspaper, the web video The Onion News Network, and a slow but steady stream of hardback and paperback books such as Our Dumb Century; The Ecstasy of Defeat: Sports Reporting at Its Finest; Love, Sex, and Other Natural Disasters; and, too, this recently published The Onion Book of Known Knowledge. The Onion’s editorial staff appeared in the controversial 2005 film The Aristocrats, hardly to be confused with the innocuous Disney film, The Aristrocats. The satire in The Onion is biting, silly, and often outrageous. But it was also subtle enough to fool China’s People’s Daily Online. When The Onion declared Kim Jong Un the sexiest man alive, Online proudly republished the article, relishing references to the North Korean leader’s “chic short hairstyle” and his “cute, cuddly side.”

Yep, gotta love The Onion. Unless, of course, you find your love compromised by its ecumenical blasphemy; uncompromising language, scatological, disparaging, offensive; graphic and impolite sexual descriptions and allusions; and shockingly irreverent political and social commentary. Yep, The Onion Book of Known Knowledge, has all of this—and more! Known Knowledge purports to be a one-volume encyclopedia, ranging from Aapanthera (“A previously unknown big cat that . . . had eaten all the aardvarks.”) to ZZ Top (“Ba-dah-dah-dah . . . rumor spreadin’ round! In that Texas town!”). In between are a rash of entries that might amuse, offend, bore, titillate, and/or outrage most anyone, depending on inclination or time of day. We find that Jack Kerouac “was actually a shy, morbidly obese shut-in” who “preferred doing jigsaw puzzles with his elderly mother.” A 401(k) is “ a type of retirement savings account that allows individuals to set aside a portion of their income to vanish in an economic downturn.” Did you know that The Fort Sumter Gift Shop was “where Union soldiers purchased shot glasses and Fort Sumter pins for their friends and relatives during the Battle of Charleston Harbor” or that Mr. Ed was a “miracle horse with the ability to speak . . . and resolve logical and moral quandaries who should have been revered as a god by all mankind”? Or that Saddam Hussein “carried out a devastating attack on the American economy by forcing the United States to spend billions and billions of dollars to invade his country”? The “physical and emotional sensation upon reaching the climax of an encyclopedia” is the Known Knowledge’s entry for “Orgasm.” You get the drift.

Throughout the book, threaded through random entries, is a noir detective love story that is by turns clever and obvious. The satire of the book also extends to the lengthy introduction that gamely describes the Friedrich Siegfried Zweibel Center For Knowledge Studies and this institution’s Editorial Board, and finishes up with questions for discussion, a ready reference (obscure animal sports, for example), graphic credits, acknowledgements and a copyright notice (“The Onion . . . has acquired the rights to all knowledge, past and present. . . .”).

I found Known Knowledge less funny, less satisfying than the 1999 Our Dumb Century, a very good satire on newspapers and newspaper reporting, and I found myself wishing here for a sharper bite, keener wit and sillier sallies. Is The Onion staff finally running out of steam? Should you buy the book? Perhaps the answer to that rests with your opinion on the value and importance of the genre of literature for the john.

The Onion Book of Known Knowledge: