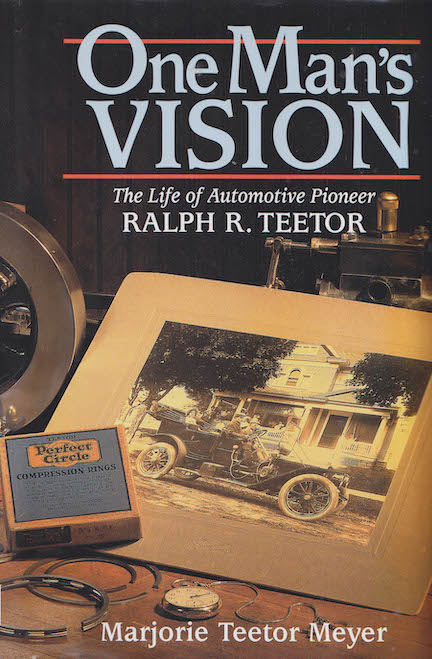 While his name may not have the wide spread and instant recognition as say Henry Ford, Boss Kettering, Harry A. Miller or Fred Duesenberg with whom he was a contemporary, your search results will indicate he was just as accomplished. Born before the gasoline engine was anything but a figment in tinkerers imaginations, Teetor tried his own hand at making one, more than once.

Teetor was motivated by a natural curiosity coupled with real needs to fill. His family-operated business wanted to motorize the railway inspection cart so that its operator could inspect greater amounts of rail line in any given working day yet also be able to single-handedly lift the cart off the track to clear the way for a train. Ralph created that needed single-cylinder gasoline engine and the Teetor family company renamed itself the Light Inspection Car Company.

The auto came to Light Inspection Car Company when its machine shop was asked to build four-cylinder engines for Continental and then McFarlan, American Motor Company, and others. Those engines sold and were named, due to Ralph’s engineering improvements, the Teetor-Hartley engines. Ralph then turned his focus on one engine element, the piston rings, for he realized improvements there would mean better, more powerful engines. That focus soon had the company once again renaming itself the Perfect Circle Corporation. It would endure as Perfect Circle from 1926 until becoming a subsidiary of Dana Corporation in 1963. Dana had purchased the company to acquire the most recent Ralph Teetor invention, cruise control.

Teetor’s abilities, his inventions and accomplishments are notable all on their own. But they were and are judged even greater when you understand that Ralph had been rendered completely sightless—blinded by a childhood accident at age five—and hence the double entendre of the book’s title, One Man’s Vision, The Life of Automotive Pioneer Ralph R. Teetor. 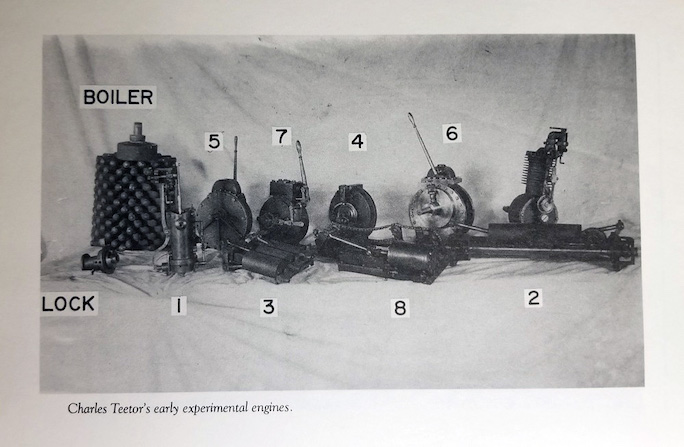 Teetor’s first experimental attempts at engine creation: #1 and #2, 1895 and ‘96 respectively, are internal combustion engines. Each vibrated wildly. Numbers 3 to 8 are all small steam engines.

His biographer is his only child, daughter Marjorie Teetor Meyer, so text is light on technological details, focusing in greater part on how her father had not permitted his loss of sight be a limitation in any way. He could and did walk city streets unaided and could find favorite restaurants and other places in his Hagerstown, Indiana hometown, but also in other places like Detroit or Indianapolis. He navigated by counting steps and being super aware of his surroundings for he fully utilized the other five senses.

In 1911, he’d joined the Society of Automotive Engineers (SAE), itself founded just a half-dozen years before. That accomplished group elected him its president in 1936 as is beautifully documented in various SAE publications including the hardbound The SAE Story, On Hundred Years of Mobility published in 2005.

Typifying his humility and humor was Ralph Teetor’s reply when queried by a fellow engineer, “With all you have been able to accomplish, what more do you think you would have done if you had been able to see?” Ralph responded, “I probably couldn’t have done as much, because I can concentrate and you can’t.”

Though the book was published a bit over a decade ago, it is still easily available and is well-written, thus a worthy addition to anyone’s library or seeking a copy from the local library to read purely for an appreciation of its contents.

The Restoration of Antique and Classic Cars, Vol. 1 »
« Porsche 911 – The Practically Free Supercar