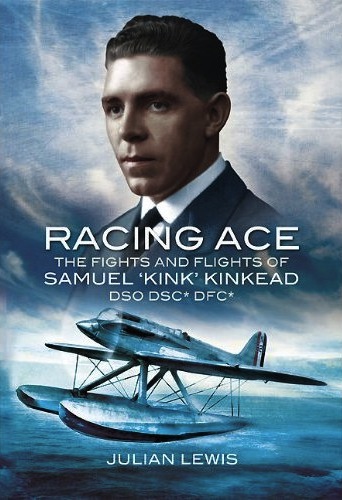 This excellent book enters into the record the long-forgotten and never-before fully told story of the achievements of a brave and uncommonly—for such a junior officer—highly decorated Flight Lieutenant from South Africa who crashed and died, aged 31, in 1928 attempting to break the World Air Speed Record on the river Solent.

Having been part of the High Speed Flight that won the Schneider Trophy for Britain in 1927 would alone secure his place in the history books. But Kink did more and was more, a “brilliant pilot and an exemplary man” as the Director of the Fleet Air Arm Museum who wrote the Foreword calls him. On the occasion of the 70th anniversary of Kinks’ death, his nephew referred to him and his colleagues as “the astronauts of their day.”

With a doctorate in Strategic Studies, specializing in Cold War-era nuclear deterrence, Lewis brings an academic’s rigor to the task of unearthing details through the use of primary sources such as war records, diaries and news reports, and, regarding the crash, the two official investigations—which are found to be incompatible with each other and with the facts.

Most satisfyingly for the reader, Lewis embeds the particulars of Kink’s military campaigns (Western Front, Russian Civil War, Iraq) and other flying activities into the broader context of strategy and policy. The 1926 RAF expedition from Cairo to Cape Town is placed in the context of the geopolitical ambitions behind long-distance and high-speed flying contests. The next sentence should be accompanied by a drum roll or fanfare because it is such a high-level achievement: despite casting a wide net and touching upon many things the book remains focused on its primary narrative and also eminently readable, with fluid, engaging prose and compelling clarity of thought.

Pilots will not find deficiencies, whether it be jargon, principles of flight, or aircraft operations. This might be a good time to point out that the author is a member of the British parliament these days, and has been since 1997. That career, in fact, is directly related to his interest in this topic and this story all by itself makes for a good read.

Even readers already familiar with the Schneider Trophy or the flight and testing activities at seaplane base RAF Calshot from whence the fatal flight commenced will find that many of the 65 photos shown here (bundled into three eight-page sections) are new to the record. Some of them come from the two Kinkead photo albums held at the Fleet Air Arm Museum.

Appended are Kink’s verified and likely combat victories, No. 2 Wing personnel roster from 1916, 1914–26 Location List for 1 Squadron RNAS/201 Squadron RAF, explanation of ranks in different service branches, and, most importantly, an independent modern-day critique by a UK Defence Academy prof. of the 1928 findings of the RAF Court of Inquiry and the Coroner’s Inquest. In hindsight, these two bodies did woefully inadequate work and one can only wonder as to their motives. This is treated in considerable detail earlier in the text and pilots especially will relate to the discussions of rudder shudder, stalls, the optical issues in approaching calm water at speed etc.

An extensive Bibliography lists both sources and recommendations for further reading, and the Index is of exemplary construction.

Anyone with an interest in early aviation, anyone who can appreciate proper research, anyone with an imagination cannot fail to get something out of this book.