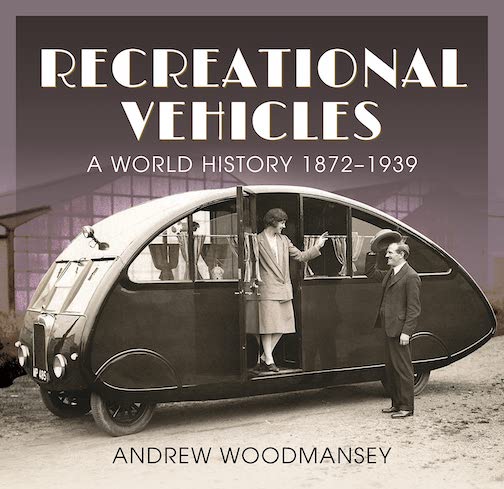 Consider for a moment this book’s title and subtitle: Recreational Vehicles, A World History 1872–1939. This is not a timeframe that one usually thinks of in association with such vehicles and to be sure not one covered in most literature, books, magazines, or internet. Author Andrew Woodmansey even writes that in researching for this book he discovered, “Very little has been written about America’s RV history before 1910.” He goes on to marvel that, “This is somewhat surprising for a country with such a strong RV heritage and good historical records.”

Your commentator eagerly dove into this book for, not unlike its author, I had been a happy participant/member of the RV community for a number of years mid-1980s to mid-‘90s putting some 75,000 miles on my mobile quarters with much of the time spent doing what’s referred to as dry camping, as in no electric/water/sewage hook-ups. Thus, one learns to be conservative in the use of resources (fresh water especially) and disciplined in handling wastes similar to what the early RVers this book shows and tells of experienced—and not unlike what folks living today in areas around this globe face with the prevailing challenges of changing/warming climate conditions.

Author Woodmansey describes his book perfectly in a single sentence of his multi-paragraph preface, “It is a curated selection of early RVs from countries where these vehicles have become part of the leisure culture.”

What sets this book apart from others on this topic is its purposeful survey of RVing in the 1872 to 1939 timeframe in countries other than just the author’s country of birth, the UK, or the one in which he currently resides, Australia. Perhaps the largest making and selling market is in the US but others too had developed a significant following including Germany, France and Belgium, and New Zealand; each of which are given their own standalone chapter.

Think of slide-outs, seen everywhere in all types of RVs these days, as a modern day innovation? Not by a long shot. The first one was pioneered by no less a giant in its own right than Sears & Roebuck when it introduced its Split Coach trailers sold prior to World War II.

Like-minded recreational vehicle owners came together forming clubs in many lands. Likely the oldest was the UK Caravan Club dating its origins to 1907 and still in existence today albeit with a slight name change to UK Caravan and Motorhome Club. A decade later the Tin Can Tourist club formed in the US. It too is still in existence with a membership slightly over two thousand.

Image on left shows the Tin Can Tourist club’s 1931 convention in Florida. Facing page shows some 1920s American housecars as these early motorhomes were called. That’s a Pierce-Arrow on bottom left while the others are home, thus custom, constructed.

France and Belgium each had strong RVing cultures. One particular Frenchman was a singularly prolific inventor-constructor of RVs. His Carling Home series were hard to miss as the next image shows. In all Charles Louvet (1894–1957), is credited with over 50 serviceable inventions and included the specially designed custom furnishings seen top right below which he designed to be lightweight while also being attractive and comfortable. “Louvet would travel extensively through France,” writes Woodmansey, “to promote his unusual vehicles to the press and an astounded public. His supportive family would sit in a local café, sometimes late into the night, whilst their mobile home was being exhibited.”

Eye-catching isn’t it? Top left in its “compact mode” it is 11 meters (approximately 36 feet) long. Bottom left Carling Home No 4 extended when “at rest” is fully 18 m (approximately 59 ft). Bottom right is its central section under construction.

Each country’s recreational vehicles display slight variances as dictated by an area’s terrain, roads, and culture. As examples: due to vast distances, Australian RVs really didn’t come into their own until motorization arrived; New Zealand required shorter overall length and high clearance to negotiate its terrain and roads; UK and European countries display both the earliest start and greatest variety of designs and uses.

Not all teardrops were created equal. Shown below is the Aero-Sport constructed in Germany but its design had resulted from the collaboration between German race car driver and glider pilot/aircraft designer Wolf Hirth with an American with similar talents named Hawley Bowlus (think designer of Bowlus trailers and, while employed at Ryan Aircraft, had been in charge of the construction of Charles Lindbergh’s Spirit of St Louis). Vintage Bowlus trailers are highly desirable and collectible today but also being made brand new by a company of the same name.

The Aero-Sport clearly displays Hirth and Bowlus’ guiding criteria of light construction, aero shape, with no wasted or unutilized space, yet with a high cross-country mobility. The cutaway in particular demonstrates the ingenious use of space.

It’s a fun and fascinatingly well-written and -produced book that is also generously illustrated. And it’s available in markets around the globe as detailed on the author’s website at the bottom of the page under the “Book” tab and on which, too, there’s a great deal more to see, read, and explore. We might only hope that Andrew Woodmansey might be contemplating another book!

A Complete History of U.S. Combat Aircraft Fly-Off Competitions »
« Lamborghini: Where Why Who When What