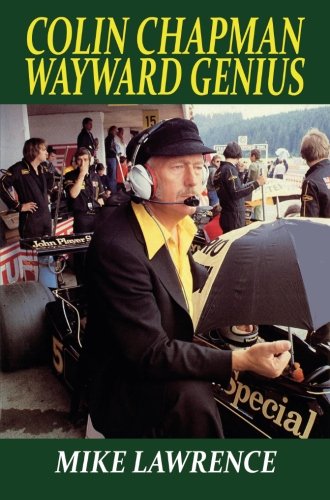 I find it interesting that we have a tendency to elevate our “heroes” to a superhuman plain, assuming and hoping, wrongly, that because they are brilliant in one particular area, they must be all round good guys.  Well, if Mike Lawrence’s book is to be believed, Colin Chapman (1928–1982) was a long way back in the queue for sainthood.

This is an interesting book. Certainly not the best written I have ever read, as it seemed to mix topics and at times I found myself confused (some people say that that is not an abnormal state for me). Anyway, motoring writer Lawrence has presented an interesting biography of one of his boyhood heroes, showing us both Chapman’s brilliance and his weaknesses. Not in any sensationalist way, just in a straightforward factual way.

Perhaps the most startling fact, of which I was unaware, was that when Lord Justice Murray sentenced Chapman’s accountant and finance whiz, Fred Bushell, to prison for diddling the British government of almost $18 billion, he stated that had Chapman been in the dock he would have received a sentence of at least 10 years. The only reason that Chapman wasn’t in the dock was because he had died. It is sobering to think that he could have ended his years in prison with his reputation destroyed.

The DeLorean affair was Chapman’s downfall, but that comes towards the end of the book. Preceding chapters cover the man’s undeniable skills and achievements; his personal magnetism that attracted so many talented people to work for him, often for little monetary reward; plus, his wheeling and dealing as he regularly sailed close to the wind.

Quite a lot of the story you will have read before, but Lawrence has done his homework and debunks some of the myths that have been allowed to live on and even grow over the years. He also sets the record straight on who designed what and who influenced what. We tend to believe that Chapman designed almost every aspect of every Lotus, whereas, as well as being a brilliant engineer he was also a master of foresight and timing, this coupled to his ability to attract excellent people meant that the outcome that he envisaged could be achieved without his detailed involvement.

Lawrence claims an interesting dichotomy in the Chapman character: although he was willing to “cheat” in business to achieve his ends, he would never cheat in motorsport. Not even whispers and rumours ever linked Colin Chapman to a misdemeanour when it came to technology. He was not interested in breaking the rules, he was only interested in being ahead of the rules . . .”

The only slightly dubious technical incident that Lawrence could uncover and reveal was when Lotus entered the 15 at Le Mans in 1959. The cockpit was actually fractionally narrower than prescribed. Chapman planned ahead and made himself a custom ruler that was, ahem, modified to show his dimensions were up to snuff. When the officials came by to check the measurement, Lotus aerodynamicist/designer Mike Costin (who would go on to co-found Cosworth Engineering) proffered the recalibrated ruler which showed that the cockpit was the required width!

Lawrence suggests that the “real” Colin Chapman was the engineer, rather than any of the other many faces that he presented to the world: “No engineer who worked with him has a bad word to say about Colin as an engineer. Ron Hickman, who designed the Lotus Elan, was ripped off by Colin in financial transactions, yet maintains that Colin was absolutely straight when it came to engineering. Every other engineer says the same.”

Lawrence provides some interesting insights into the relationship between Chapman and Jay Chamberlain in the USA. Jay told Colin that there was a major problem with the Elite: if you accelerated and braked hard, “there was a severe difference of opinion between the final drive and the fibreglass shell and the difference was resolved with them parting company.” Colin didn’t believe Jay but when finally goaded into action, he took an Elite off the production line, put Mike Costin in the passenger seat and blasted up and down the road. Sure enough, after no more than 20 minutes Colin sat in the shell of the Elite with the transmission elsewhere!

Lotus cars have had a reputation for being fragile and there is no doubt that the race cars didn’t carry unnecessary weight. But it appears that Lotus shouldn’t carry the can for Moss’ career-ending accident. This book throws light on the Lotus that Moss was driving at the time of the accident. Alf Francis, Moss’ well known mechanic, evidently fancied himself an engineer. Francis modified the Lotus 18/21 to accept a Climax V8 engine. When Chapman saw the result he laughed, commenting that the rear of the car would have the torsional rigidity of a sponge cake! Moss subsequently suffered sticking throttle and gear change problems. There is a school of thought that the car was out of gear when Moss entered St. Mary’s at Goodwood and then hit the bank head on. Perhaps the flexing of the rear of the chassis contributed?

Lawrence has provided a useful Index and there are two sections of b/w photos. All in all, if you are interested in the Chapman legend then you will enjoy this book. Wayward or not, he was still a genius.

Karl Ludvigsen’s excellent 2010 Chapman book is officially out of print so the 2012 reprint of Lawrence’s 2002 book is actually easier to find these days.

First published by Breedon Books in 2002