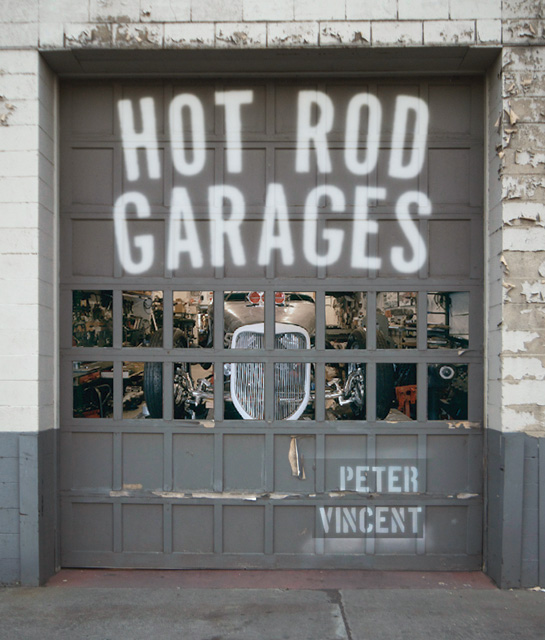 Think of this book as a Shop Hop or Garage Crawl, a guided tour and look behind the curtain. It is a useful distinction to say that hot rod photographer—and rod owner/builder—Peter Vincent doesn’t so much send you out for a look-see on your own but takes you along with him—all the while reminiscing and dispensing snippets of quotes and conversations, facts and factoids, and personal impressions. In other words this book is not an analytical treatise on the state of the art in American hot rod building but one man’s take on what he knows and cares about. The book is also only a mere slice of life, a moment in time. What is shown and described is what happens to have been on the floor that day. To further qualify the scope of the book it is also worth pointing out that the shops covered are predominantly on the Northern side of the country, even straying into Canada, which is probably related to the fact that the author hails from Idaho.

The word garages in the title might understandably raise the expectation that this book is about just that, garages, the places where a private owner would park, service, display and otherwise “live” with their car. Instead, this book is about shops, the places where the actual build occurs: small or grand, indoor or outdoor, pro or private. (So, if you’re hoping to find, say, ideas for setting up or accessorizing your home garage here, this is not your book!) You’ll have to read the Preface to see why they author chose one word over another; in a way he treats them interchangeably, with the possible nuance that a shop is only a bigger garage.

From a storytelling point of view it would seem natural to start with the small garage and build up to the big shop. Vincent chose a less dramatic but more democratic approach: alphabetical order (except for five SoCal builders who are lumped together under “L” for “LA area”). Even at that he expresses an obvious discomfort at the inevitable limitations of a book: not everyone who deserves to be in it is. So, with apologies to those who ended up on the cutting room floor we follow him into 18 shops.

With the aforementioned distinction between garage and shop in mind it is almost anti-climactic to begin the story with Roy Brizio’s Street Rods Inc., a lavish, opulent, slick establishment that will make the open air/carport denizens green with envy. With varying levels of magnification each shop is portrayed in terms of its history, owner/s, craftspeople, philosophy, and notable projects. Two of the shops (Moal Coachworks and Tardel) are covered by other writers (Michael Dobrin and Kevin Tomson respectively). Ken Schmidt who (with Keith Cornell) runs Rolling Bones contributed to that chapter and submitted illustrated step-by-step summaries of an actual build. Given the author’s intent and method it is in the nature of the beast that the book only scratches the surface. Put a different way, the reader will find the contents and the presentation appealing enough to want to know more (and thus sequels are born . . .).

The photos too have that sense of unstaged in-the-momentness. They are not art, or about art, but about being there. This has nothing to do with photographic ability but with the tone of the book. Vincent is capable of taking a mean photo all day long—but this sort of book is not the place for this sort of photo. Lighting, shadows, blocking, composition, cropping, props etc. display a certain casualness not to be mistaken for inattentiveness! In terms of design, the book is visually very strong and features a host of unusual treatments, foremost the cover of thick board that shows a garage door with punched-out “windows” behind which is visible, as if a light is on, a subtly glinting rod in a jam-packed garage. (It you must know, both the door and the garage are in Idaho but not the same building.) From the pinstriping and tire tracks on the chapter openers to the sideways-printed folios, there’s much to see and much to admire here. But, many of the pages have glossy black borders and if you are the sort of car owner who can’t rest until every fingerprint or swirl mark is conquered, this book will drive you to distraction. Of the many b/w photos only a few are vintage ones; most are rendered this way merely for “atmosphere.”

One more item deserves mention. Most books have forewords. Most forewords are nothing but generic platitudes and not worth the paper they’re printed on. This one was written by the Oakland Museum of Art’s chief curator of art, Philip Linhares. Every word he wrote is pertinent to the subject in general and the book in particular. Exemplary! He helped establish the Early Ford V-8 Club of America and later, after co-organizing the 1996 exhibition “Hot Rods and Customs: The Men and Machines of California’s Car Culture,” acquired—and liberally uses—two Ford rods himself. Incidentally, Linhares guest-curated the gallery show “Anatomy of a Hot Rod” (2007, Dean Lesher Regional Center for the Arts) which juxtaposed the stock versions of 11 cars next to their rodded reinterpretations; some of the photos on display were Vincent’s.

Even the Index leaves nothing to be desired. While most of the rodded vehicles in this book are cars there are also a few motorcycles and also a few dragsters and salt flat racers.