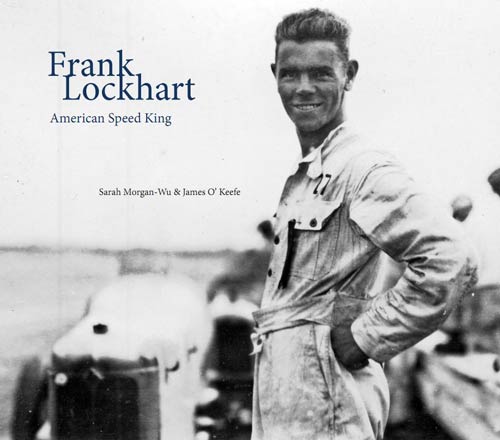 “To this day a mystique surrounds the achievements of American race car driver Frank Stallworth Lockhart. As can happen when a gifted athlete dies before reaching the height of his career, historians, and those left behind can often glorify actual events, create a mythology and possibly even overlook important but not well known achievements.”

He was a bright star at 25—as a mechanic/engineer as much as a driver—when he died in 1928 on the sands of Daytona Beach, flung from a car of his own design (an inter-cooled V-16 engine using four Miller dohc straight-eight blocks and two crankshafts geared together) when a tire burst during a Land Speed Record attempt. If it was hard for his contemporaries to fathom how a young man often—but not here—described as nearly illiterate could possess such mechanical wizardry and driving talent, it is no easier today when what little can in fact be known has been obscured by decades of uneven reporting focusing on mainly the splashy achievements, such as the LSR attempt or his rookie win of the 1926 Indianapolis 500 as a relief driver in only his third year of organized racing.

Pruning the record, then, is the aim of this book and the ones that, hopefully, will follow in this publisher’s new American Racing History Series. The “mission statement” for this undertaking is worth quoting in full: “American automobile racing history is a field of scholarship still open to research. In an attempt to take on some of the crucial parts of this field and to fill gaps other earlier major works did not cover in extensive detail, Racemaker Press has initiated a series of scholarly books devoted to specific subject matters within this context: personalities, drivers, tracks, marques and other points of specific scholarship.”

To appreciate this approach, do a quick test: spend a few minutes trawling the Internet for Lockhart info and then read the first page of the book. Lots of differences in the details; not that there is a reason to doubt the quality of the authors’ research (look no further than their credentials, and specifically O’Keefe’s Winners Book, to rest easy on that score) but since the book’s avowed purpose is to “check and verify many questionable stories that have been circulated about Frank Lockhart’s life and career” it may well be thought  unsatisfactory that, outside of a number of sources given in-text, no comprehensive foot/chapter notes or cross-references to the Bibliography are provided.

Of the book’s 256 pages, a mere 25 contain narrative—solid wall-to-wall text with no visual relief from illustrations or even nuanced typography or use of color. Lockhart’s career lasted only five years and is portrayed in sufficient detail here but there is minimal reference to the broader context of the American motorsports scene in the busy 1920s or to other concurrent events of technological import (Lindbergh et al) that moved the public  to similar adulation.

This, although not explained in the book, is not an omission but intentional: the authors consider their mission to be one of fact gathering (which, for instance, could become the starting point for a more fleshed-out contextual Lockhart bio by a subsequent writer) but not interpretation. Readers are thus allowed, expected rather, to draw their own conclusions. This is deep and mature and admirable in every way, but a tall order. While after years of pondering every nuance of their book the authors are fully steeped in Lockhart minutia, it may be entirely lost on the new reader that, for instance, an alternate reading for Lockhart’s “illiteracy” may be dyslexia—a theory the authors subscribe to but, because it is conjecture, refrain from expounding so as to not color the reader’s own thinking.

The bulk of the landscape-format book, some 160 pages, is devoted to absolutely splendidly reproduced b/w photographs, mostly one to a page, with brief but specific captions. They are about 60:40 divided into photos of Lockhart’s racing activities—including the heretofore undescribed 1923/24 seasons—and three specific cars, the LSR car and the two Miller 91s in whose competent post-Lockhart life the authors see a particular example of his abilities as a designer/constructor. There are several still photos of the fatal crash; readers may want to search for the chilling original British Pathé newsreel footage on the Internet .

Tables at the end of the book present Lockhart’s 1923–27 race record and 1926–29 speed records (both are augmented with notes clarifying certain entries), and 1925–27 pole winners. Appended are some 30 pages of reproductions of primary sources such as Lockhart’s intercooler patent, various news clippings and letters from Firestone and Stutz, a discussion of the tires on the LSR car, an inventory of Lockhart’s estate, an obituary, and various family documents (birth, marriage, death certificates).

The National Sprint Car Hall of Fame inducted Lockhart into their first class in 1990; the Motorsports Hall of Fame of America took until 1999 to bestow such recognition. He is described here as “perhaps one of the most enduring heroes in American automotive racing.” While the record, i.e. the data, does speak for itself the reader needs to accept that the authors do not seek to theorize as to the how and why for him.

Even for the reader who does not have a specific interest in Lockhart per se, the photographic treasures offered here are immensely appealing and it is as important as it is convenient to now have them gathered in one book.

Printed on archival paper and bound in a wear-resistant cover (a ribbon bookmark even) the book is a worthy addition to Racemaker’s line-up—and your bookshelf—and we are eagerly awaiting the authors’ next offering, Peugeot Racing In America (pre-WW II). Racemaker has a full release slate for the immediate future with titles that had been talked about for some time finally going into actual production.