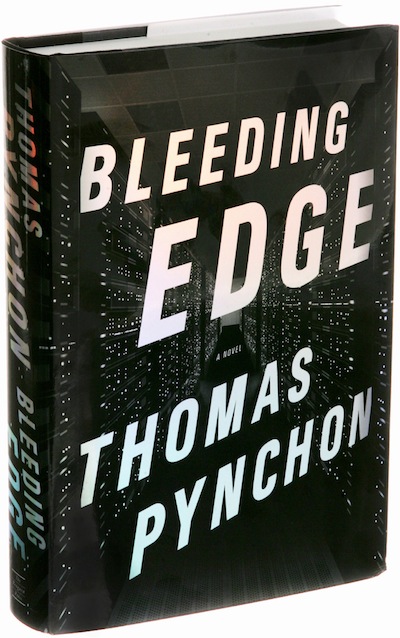 “You remember those twin statues of the Buddha that I told you about? Carved out of a mountain in Afghanistan, that got dynamited by the Taliban back in the spring? Notice anything familiar?”

“The Trade Center towers were religious too. They stood for what this country worships above everything else, the market, always the holy fucking market.”

“It’s not a religion? These are people who believe the Invisible Hand of the Market runs everything. They fight holy wars against competing religions like Marxism. Against all evidence that the world is finite, this blind faith that resources will never run out, profits will go on increasing forever, just like the world’s populations—more cheap labor, more addicted consumers.”

Thomas Pynchon (76) is a writer of fiction and an acquired taste, one that not all people share. His books are generally tales of personal quests written on a grand scale. Humorous on the surface, his storylines deal with shadowy power structures just out of view that manipulate some unknowing individual’s reality from behind the scenes. Put up for a Pulitzer Prize in 1974, the Pulitzer board rejected Gravity’s Rainbow as unreadable, turgid, overwritten, and obscene. While the board’s criticisms are understandable at many levels, I personally can’t get enough of his writing, and consider the huge and unwieldy Gravity’s Rainbow akin to James Joyce’s Ulysses.

The storyline of Pynchon’s latest book, Bleeding Edge, revolves around a disbarred forensic accountant illegally investigating the fringes of the yet-to-happen 911 attack. Much like Sam Spade in The Maltese Falcon, The Dude in The Big Lebowski, or Doc in Inherent Vice, Maxine follows the beat of her own drummer. Drawn in, spun around, then spat out at the end, she soldiers on for reasons of her own choosing.

All the wild, colorful people found in any Pynchon novel swirl in and out of the reader’s focus. There’s the guy who has a nose so sensitive he can smell the multi-year scent-history of any crime scene. His all-encompassing passion: smelling an original bottle of Hitler’s cologne, a near-secret scent rumored to still exist somewhere in a hidden collection. Computer nerds who live within the networks they create. A twisted special ops agent the government developed to do the jobs that must be done begins to see the light. A comic Russian hit man duo, Misha and Grisha, who are loving the US of A. As in any Pynchon novel, the cast is composed of crazies, all randomly bumping into each other as they advance a storyline based on Brownian Motion. Some call it fate; in Pynchon’s hands it seems more like chaos theory in action. Cause and effect. Things mix and react at many different levels and in many different ways. What’s happening is out of control, but predictably so. Bleeding Edge does resolve itself, but not in a classic Hollywood way, which is fitting for a Pynchon tale of the reality behind the reality of our current world.

With a writing style that is thick and viscous with imagery, he tells stories full of accuracy, fabrication, popular myth, speculation, and drug-crazed fantasies. By the time you get to the end of any of his books, Pynchon has warped your perception of history. Did giant international corporations actually make money off both sides of WWII as hinted at in Gravity’s Rainbow? Did the 911 World Trade Center attack involve corporate money laundering and battling governmental security agencies secretly funding competing agendas? Are industrial complexes and massive wealth, working in combination with technological advances like the internet, weaving their influence behind the popular news, leaving the politicians to act as unwitting secondary players, thinking they are in control, when, in fact, they are but pawns in the game? No firm answers are presented in Bleeding Edge, but suspicion has been planted, using a fictional base as the medium for presenting the message.

Long considered a literary genius, Pynchon’s sentence structure can ramble on for a full paragraph without losing the reader’s interest or disrupting the pace of the book. The richness of his descriptions requires a slower reading pace for me. He assumes the reader is intelligent, and unexplained jokes, puns, and foreign-language double-entendres pop up frequently.

Now in his 70s, Pynchon seems to be experiencing a burst of coherent creativity. His previous book, Inherent Vice (2009), is being made into a movie, and this one, Bleeding Edge, is structured traditionally enough to share the same fate. His early works are vague on traditional plot structure and lack the focal points that movies typically have. Why Pynchon has shifted his plots to a more acceptable format is a puzzle, but one I’m happy to see. The writing doesn’t suffer, and the surreal quality of his prose remains the same—there’s just less of it. He’s still way out there somewhere, with a sense of humor that leaves me laughing like it always has. Here’s hoping he can find commercial and popular success without compromising his well-established literary reputation. The madman with the quill has either become self-editing, or someone he respects is cutting those lush paragraphs that fill so much of his previous work, but do zero to advance the story.

To deepen your interest in Thomas Pynchon the man, let me mention that the “mystique” surrounding him is that no one knows who he is. Obviously he knows who he is, and he knows who he knows, and his publisher must know who he is, but the reading public and his critics and peers know little beyond a grainy bucktoothed high school photo, the only picture of him known to exist. He seems to agree with J.D. Salinger’s theory of public relations: no news is good news. Furtive and reclusive when it comes to officially accepting praise, Pynchon has dodged interviewers and public exposure all his life to the extent that exactly where he lives at any given point in time, or has lived, remains opaque. Supposedly here (New York City), supposedly there (the Oregon coast, Mexico, Los Angeles), he apparently travels among us invisible, yet all-seeing. I picture him as that shattered-looking old guy driving a beat-up pickup truck around the outskirts of an Indian reservation.

For me, Pynchon’s writing has tightened up over the last 50 years. He seems like an old blues musician who doesn’t play as hard as he used to, yet the end effect is better. No more shocking literary honking and barking just because he can hit descriptive notes no one else thought of writing before. Mellower and more refined. The wisdom gained after 70 years of being human seems to be leaking through. To quote Jimi Hendrix, “I’m digging it, myself.” More power to you, Mr. Pynchon, wherever you may be.