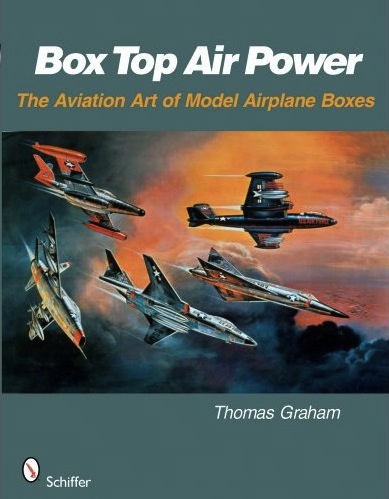 This softcover book presents about 170 examples of [a] “exemplary works” (in other words not everything under the sun) that [b] the author deems “artistically superior” (read: other people may have made other choices) of [c] predominantly US model kit makers (for European/Japanese kits look elsewhere). Also, the author favored old-style techniques over airbrushed or computer-generated art. By stating his premises right upfront the author is obviously mindful of the fact that a book about a subject with which readers are likely to have personally interacted will elicit subjective and possibly irrational reactions regarding inclusion/omissions. Moreover, a reader who is now an adult will have bought these kits as a child and formed preferences, opinions, attachments at a time when one’s reflective faculties were different than now. In other words, no matter which way an author goes about his selection, the outcome will be rife with controversy. Everybody on the same page now?

Among the more objective issues a reader might raise is that of the smallish size of the reproductions. On average they are 8″ wide and 3–5″ tall, with one illustration per page (the single exception is a Catalina PBY which is shown in two versions, 10 years apart, by the same artist but for different kit makers). There is one spread on which four planes are shown at a really diminutive size of ca. 1.25 x 2″. It is not clear why these particular ones were squeezed together; possibly they were an afterthought or needed to make up a signature.

The author is a professor of history and has several similar books to his credit. He grew up at just the time plastic model kits became popular in the US. The Introduction presents a basic overview of the genre but from a distinctly American perspective. There is, for instance, no mention of the pioneering British “Skybirds” aircraft construction kits of the early 1930s that established the standard of 1/72 scale (1 inch = 6 feet).

Kit makers realized early on that “the packaging is the product” and recruited talented artists to render the artwork for box tops and sides. As the author rightly observes, the artists’ styles were so distinctive that a buyer would often be able to tell one brand of kit from another. With few exceptions, the artwork is shown here in the same cropped, oblong way in which it would have been used on the actual packaging but minus corporate logos or any other sort of printing. (If it needs to be spelled out: the sides, which were often different from the tops, are not shown here nor is the actual box.) All the illustrations are in color, on glossy paper, and well reproduced. All but a very few are of actual production kits, the others are proposals. The kits included here are from ca. 1950–1980 and include powered planes (no gliders), helicopters, and rockets. They are shown in chronological order of aircraft, not kit release, which also serves the purpose of telling a history of aviation.

Each illustration lists the model/type of aircraft and the kit maker, and, in all but a few cases the illustrator. The accompanying text describes in remarkable detail the aircraft shown in terms of service history, specs, notable achievements, production numbers, markings etc. The aircraft data was vetted by ex-Revell model developer Lloyd Jones. In most cases a few words are devoted to the respective artist, occasionally even by the artist, in the form of quotes. No dates are given for the artwork or kit release nor is the scale listed. Only the last two machines shown are not actual real-life aircraft, which begin with the Wright Flyer (for which the author adopts the unorthodox spelling with an “i”) and end with the Lockheed Martin YF-22 Lightning. They are the Orion III “Space Clipper” from the movie 2001: A Space Odyssey and the equally fictitious starship Excelsior, forerunner of the Enterprise. Quirk Alert: Their description is in exactly the same technical style and deadpan delivery as that of any of the “real” aircraft and a reader who doesn’t recognize them for what they are (possibly from a future far, far away . . . ) would have to be forgiven for not seeing the joke.

All illustrations are listed on the Table of Contents in the order in which they appear. A possible improvement would have been to use this same data, reshuffle it several ways—by artist, by model maker, by name of aircraft—and turn it into an index.

The Speed Merchants: A Journey through the World of Motor Racing, 1969–1972 »
« American Military Vehicles of World War I