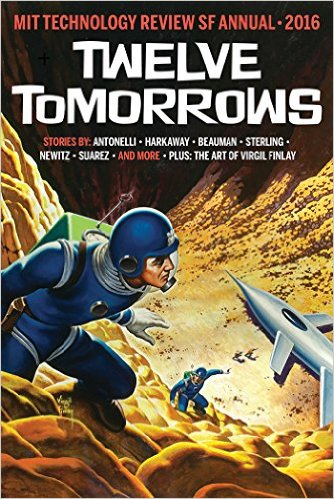 Twelve Tomorrows is a science fiction story collection published every year by the Massachusetts Institute of Technology. Their objective is to bring new technologies to the public’s attention through the popular medium of science fiction.

I bought this 230-page paperback to see what today’s storytellers think our future will be. Science fiction is a long-established method of telling the present where the future is headed, both socially and technologically (think H.G. Wells and Jules Verne). Like a thought-provoking Bob Dylan song, science fiction writers sniff the winds of change and warn us about social and technical discoveries we may want to think twice about before helping those discoveries become the new reality.

If these twelve stories are correct, we’re in for some hard times when artificial intelligence and gene splicing lead the tattered remains of humanity on a merry chase to oblivion. Economic disparity, genetic disparity, and technical disparity all loom large in the future. In that sense, all twelve stories appeal to the paranoid mind. What could go wrong, does go wrong. With few exceptions, the stories do not end on an upbeat note. In the future Pollyanna will have to narrow her eyes and fight hard to survive. 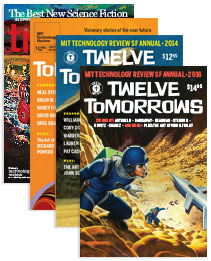 The twelve authors are all professionals with awards and books galore, so the stories are all well crafted and leave the reader pondering at the end. Some of the scariest stories deal with gene editing that undermines our individual sense of self. In today’s reality, the technical ability to do human gene editing already exists. All that’s missing is the implementation. Who will do it first, one wonders, and why? This story collection gives us some possible answers to those questions.

For me, the most surprising and thought provoking story was “Life’s a Game” by Charles Stross. As I write this review, what Stoss proposes may already be here. In his future world the internet, multiple-player games, and politics get tangled up together, producing interest groups that whipsaw the culture back and forth like a Jack Russell Terrier killing a cat for no reason. The act of “doing” is all that matters in the future, not what is being done.

To some extent all of us unconsciously generate the future based on our expectation of what that future will be, so a wise man, with an eye on the historical long run, will pay heed to the background themes these storytellers weave around their characters. The story scenarios are exaggerated for reader enjoyment, but they are fact-based, and projected into a future that I will probably live long enough to see. A sobering thought given the possible futures these twelve writers see approaching.

The reality today is that neuroscientists really do expect us to replace “our biological bodies and minds” in the not-to-distant-future with synthetic selves, and, to continue the quote from neuroscientist Kenneth Hayworth, “the result will be a far healthier, smarter and happier race of posthumans poised to explore and colonize the universe.” (Scientific American, February 2016) Posthumans? Really? Is today’s humanity an out-of-date model with a rapidly approaching expiration date? Stay tuned, as they say in the news business, for further developments.

A 17-page glossy-paper center section, “The Art of Virgil Finlay,” is practically worth the price of the book all by itself. Not being an avid reader of science fiction or pulp fiction magazines in general, I was only tangentially aware of Finlay’s art. He (1914–1971) was a talented artist able to summarize a full story in a single drawing. No captions necessary. The first plate of the eleven on display says it all for this Twelve Tomorrows short story collection. It shows a sad-looking robot lowering a human body into a grave. The plates are mostly pen and ink, drawn using stippling, crosshatching and scratchboarding techniques. Four of the plates are colorful reproductions of Finlay’s oil and gouache paintings. The eleven works of art included here are the slimmest fraction of the estimated 2600 illustrations Finlay produced for the pulp magazine industry from 1927 until his death from cancer in 1971.

The stories in Twelve Tomorrows were written by Paola Antonelli, Ned Beauman, Ilona Gaynor, Nick Harkaway, John Kessel, Annalee Newitz, Pepe Rojo, Bruce Sterling, Charles Stross, Daniel Suarez, and Jo Lindsay Walton. Sterling acted as the editor of this year’s collection, a function he performed for last year’s edition as well. He also wrote one of the stories in this edition, “The Ancient Engineer,” a science versus religion story, where science loses and mankind gets thrown for a 1,000 year loss of forward progress.

Just as Mary Shelley pointed out in her 1818 book Frankenstein; or, The Modern Prometheus, what science creates out of compassion can unexpectedly morph into something terrifying. Perhaps this book is saying: Scientists beware. Human ego mixed with technological power can generates negative results, even when the intentions are good.

From one “posthuman” to another, in the sign-off words of newsman Edward R. Murrow, “Good night and good luck.” If the stories in this collection are even halfway accurate, we’re all going to need a bit of luck to escape the fates science fiction sees coming.