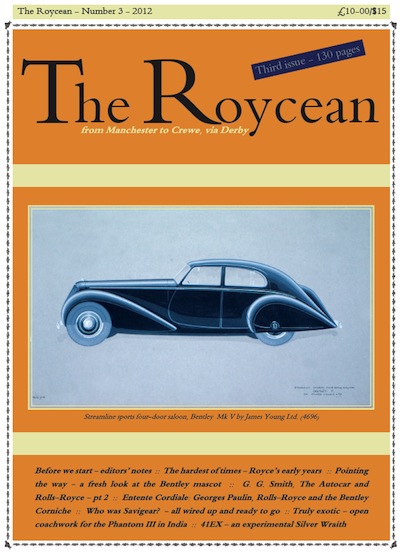 When the first Roycean came out three years ago the authors were hopeful that their scholarly annual would be embraced and have a future. It was and it does. It has grown from 104 to 124 and now 140 pages—but the price has stayed the same. It is, to be sure, a specialized offering for a specialized audience but its top-shelf, high-caliber content will resonate with anyone who appreciates good work, keen minds, and simply the joy of “prospecting.”

The scope of The Roycean remains on all aspects of the history of Rolls-Royce and (Derby– and Crewe-built) Bentley motorcars up to the 1960s, including coachbuilders, dealers, the personalities involved with the cars, individual models of the cars made, and interesting owners. (The city names in the subtitle refer to the places at which these cars were built at various times.)

Many of the same writers who contributed to the other two volumes step up to the plate once more. This third installment is the first to contain Bentley-specific material, namely a fresh look at the Bentley hood ornament and at coachwork on the Derby Bentley; the latter article being an extension of the Rolls-Royce part of the story offered in Vol. 2. Other articles cover a recalibrated look at Henry Royce’s early years and just how tough they were, the seminal French designer Georges Paulin and his work on the Bentley Corniche, the life of Pat Savigear and his role in the electrical “kitting out” process, those superbly stylish 12-cylinder Phantom III dropheads (convertibles) that were originally ordered by wealthy and flamboyant Indian customers, and Park Ward experimental Silver Wraith 41EX that has recently been resurrected.

Vol. 2 ended with a page entitled “Afterthoughts” that contained errata for Vol. 1 in an easy-to-glean format. Vol. 3 does not have that, partly because fewer specific corrections were necessary this time and partly because a multi-page “Before We Start” section dispenses them along with various emendations to topics introduced in Vols. 1 and 2 along with assorted random items of interest. Given the wealth of must-know—and must-find—information, the lack of an index will become an ever more pressing issue.

Considering the amount of work that goes into the writing and vetting of this annual, and the rather low print run, the price is an absolute bargain.

The Flying Wings of Jack Northrop, A Photo Chronicle »
« Engines of Change: A History of the American Dream in Fifteen Cars