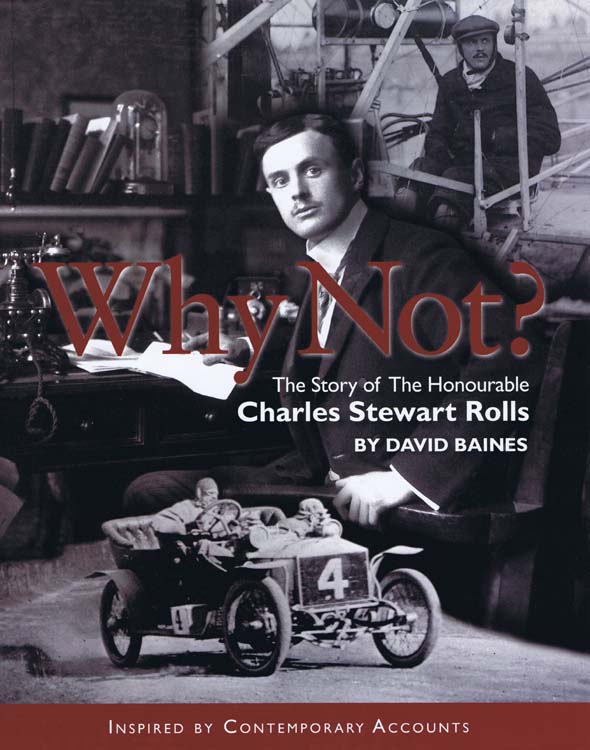 “The power of flight is as a fresh gift from the Creator, the greatest treasure yet given to man.”

Charles Rolls is probably the most famous name you don’t know anything about. He is the Rolls in Rolls-Royce, but his pioneering exploits in motoring and aviation made him a celebrated figure in the Edwardian age well before he ever met F.H. Royce. The combination of his blue blood and a drive usually seen only in self-made men, coupled with an adventurous persona, practically guaranteed his assent to hero status. Such was his adventurous streak that the opening quotes of this book do well to capture it; the first is by George Bernard Shaw: “Some men see things as they are and say why? Others dream things that never were and say why not” and the second by Rolls himself: “All good engineering calls for casualties—so why not?” The answer, both times, works well for the title of this book.

As with many historical figures, this isn’t the first attempt at a biography. In the book’s bibliography, the first entry is Rolls of Rolls-Royce by Lord Montagu of Beaulieu (1966), which was a good and traditional biographical presentation. The distinguishing element in Baines’ approach is first glimpsed in the assertion appearing under the title of the book: “Inspired by Contemporary Accounts.” To a great extent, the text is built around that—capturing everything from press accounts to Rolls’ own words and those of his immediate and expanded circle of friends and relations.

The presentation of the book is a delight. Typical of Dalton Watson creations, this book enjoys a level of quality that makes a book-lover smile. What first meets the eye is the slipcase clad in the same graphics as the book’s dust jacket. The book is hefty (9 x 11 x 1¼˝) and printed on substantial paper. Inside, illustrations, reproduced with excellent quality, adorn nearly every page of the book. There are many never-before-seen pictures sourced from the family’s collection, including entire sections, conspicuously named C.S. Rolls Photograph Album (courtesy of the Royal Aero Club Trust) and the Appendices with photos from the C.S. Rolls & Co. Album, both of which are set apart from the rest of the book by being printed on dark and light grey backgrounds respectively. Beyond the photos, the 23 Appendices are rich, from press accounts to Rolls’ own letters. The work also includes an adequate index. Taken as a whole, there is a strong narrative in the pictures—Rolls was clearly never afraid to pose for a picture, as a result, his endeavors were well captured.

If the author’s intent was to create a rich, gateway biographical presentation, there will be no disappointment here. The abundant photos and the “contemporary accounts” work well to give the reader a solid perspective on Rolls. That said, even with this latest attempt, much more still remains to be told of this enigmatic, often misunderstood, and still under-appreciated man.

While many quotes and passages (such as in the appendices) are dated and referenced, many that appear in the text are not. Surely, this helps the narrative flow uninterrupted but the historian will need to dig to find the related source document. Further, Rolls’ personal life and other motivational insights continue to elude us. It may well be that Rolls worked to keep much of that to himself—the culture of the age in which he lived and our distance from that age today will likely continue to hamper our efforts to get to know Rolls more fully. Still, Baines’ account makes a credible stab at painting a nuanced picture. To appreciate Rolls’ manifold activities, consider that it isn’t until chapter 14 of 22 that the aforementioned Rolls/Royce automobile connection is covered. By then, Rolls’ pioneering efforts in ballooning and heavier-than-air powered flight had already made him not only a celebrated figure but a competent expert.

Beyond all his accomplishments with Rolls-Royce, all through his life, Rolls was fixated on racing to the horizon and conquering the next big thing. Doing just that would cost him his life when he crashed his plane in 1910 and, at thirty-two years of age, became the first Briton to perish in an aero accident. His life was filled with firsts, and Why Not? examines many facets of the industrious and adventurous Charles Stewart Rolls.

As you read about the life of this man, so full of accomplishment and cut so tragically short, you can’t help but wonder how much more he might have achieved—or who, today, is even remotely like Charlie Rolls was in his day?

On and Off the Flight Deck: Reflections of a Naval Fighter Pilot in World War II »
« Amilcar