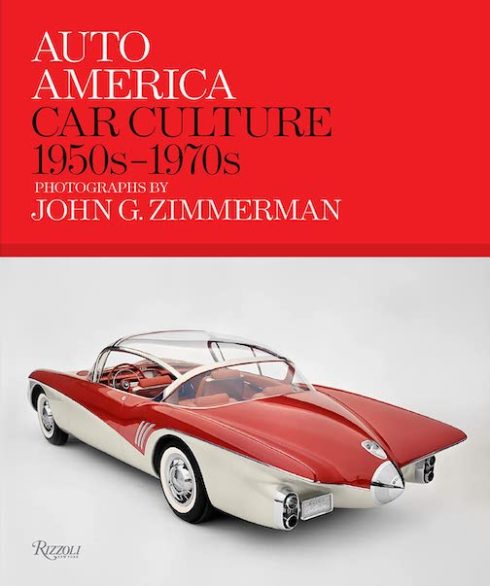 by Linda, Greg and Darryl Zimmerman

“Boosted by [Hollywood cinematographer] Bach’s informal network, Zimmerman landed his first job as a photographer at the Time bureau in Washington, DC, shooting both news and features followed by a series of assignments for Ebony that depicted the lives of African Americans in the Jim Crow south. He was audacious and gifted, and defined himself as a photojournalist, somehow able to bring pathos and compassion to breaking news.”

Just to prevent people who are not into cars from skipping this review: there may be a car on the cover—and then there is that title—but this book covers more than beauty shots of cars or examples of car advertising. 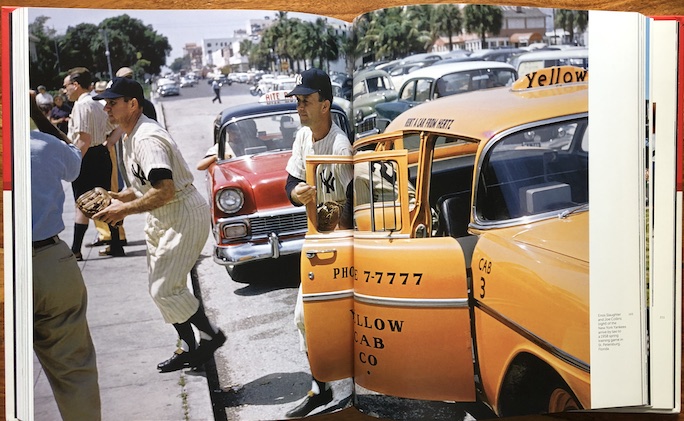 What’s happening here?? The Yankees going to work—in taxi cabs? Being in the right place at the right time is everything for a photojournalist.

You may not know Zimmerman (1927–2002) by name—although if you know an Avedon or a Leibowitz, Penn and Adams you should—but you will recognize many of the photos in this book. Some of the ones most deeply seared into your memory aren’t even in here, his contributions to the Sports Illustrated swimsuit issues (not to mention more than a hundred covers). 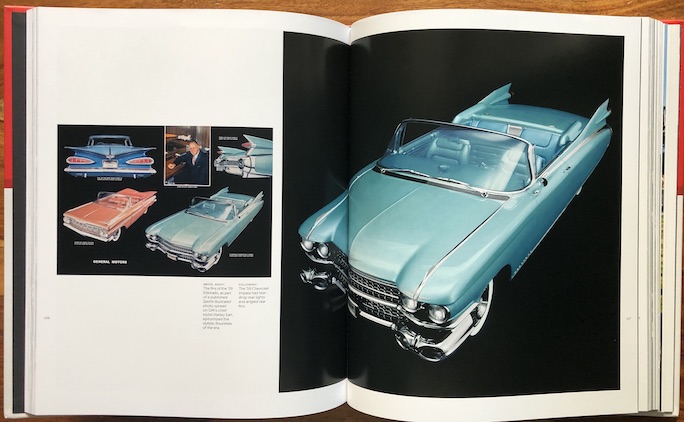 Shots like these will surely look more familiar than the one above.

There is no way to know for sure what Zimmerman had in mind when he set up the by now oft-seen shot (below) of Henry Ford and his newly appointed board chairman Ernie Breech. According to the authors, his three children (with help from John’s wife and creative partner Delores), who as curators of his archive are deeply immersed in his body of work and have produced two prior books, he “shot the two men looking back into his camera from the the twin seats of a newly introduced Thunderbird as if they were saying ‘Follow us.’” Even if anecdotal, ascribing such cleverness to Zimmerman, already this early in his professional assignment, is appropriate because it would mark much of his subsequent work. 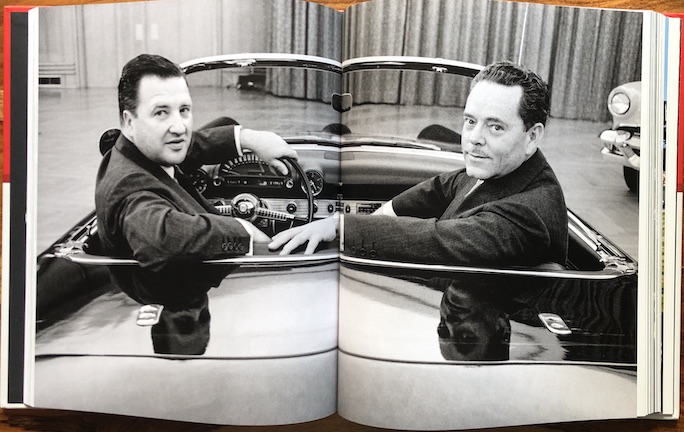 Divided into four chapters—Dreams, Design, Culture, Racing—that are introduced by former Time Inc. Sports Group editor Terry McDonell, who also penned the fine and wide-ranging Foreword, the book showcases some 200 images; except for photo captions there is no other text. Half or more have never before been published, although this is a bit of a hairsplitter as some of them are outtakes or alternates to the ones that did get printed in the popular magazines of the day or used in automakers’ advertising campaigns. 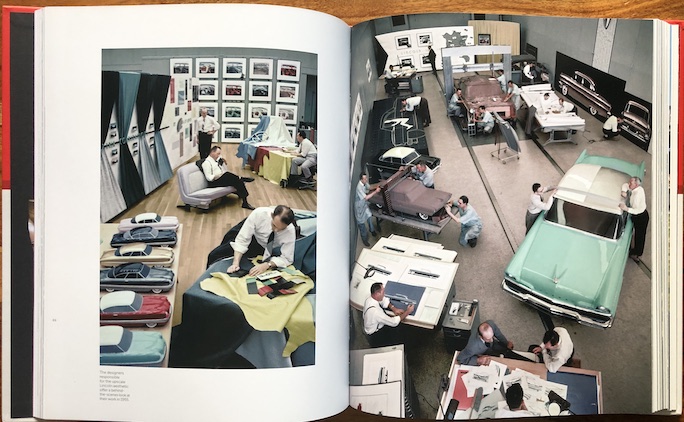 The native Californian never considered himself much of a car guy, which could only have helped his range and sense for the connectedness of cultural “overlaps,” meaning he captures masses of Detroit autoworkers with the same eye for detail and storytelling power as inside shots of car styling studios. If you were in Pebble Beach for the 2022 concours you may have noticed that there was a concurrent exhibit at the Center for Photographic Art in nearby Carmel (the Zimmerman archive happens to be in Pacific Grove, also nearby) of about 50 photos in this book—which was supposed to launch at that time but ended up delayed. 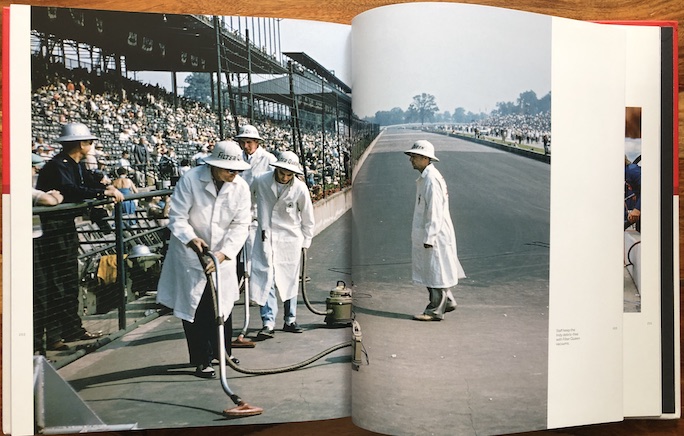 Who says men don’t vacuum? FilterQueen started cleaning up at the Indy 500 in 1951.

Neither the show nor the book delve deep into the technical, lighting, and camera placement innovations Zimmerman pioneered and popularized. Even his early use of color film (he understood the different properties and capabilities of Kodak vs Fuji and used them depending on conditions) was a novelty. Anyone who works with old color transparencies will know their color values have a finite life span, even under controlled conditions, meaning the reason the photos in this book look so fresh is because of the painstaking modern-day re-coloring. And that the printed book looks so good is of course thanks to art publisher Rizzoli doing their thing. A book with mostly full-page photos leaves a designer only so much to do with a layout so it’s all the more noteworthy that this book is chock-full of smart, deliberate choices. 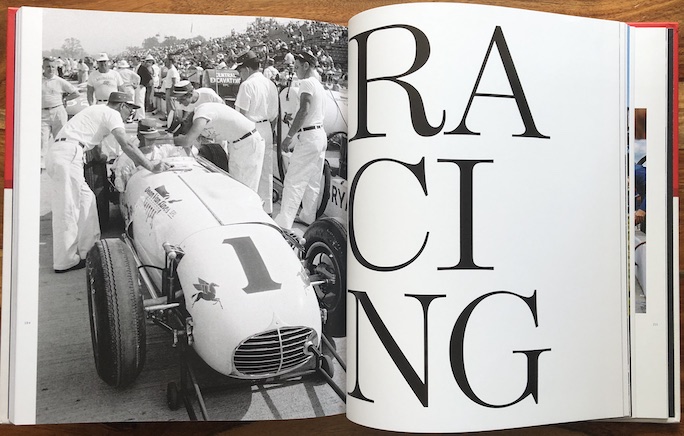 by Linda, Greg and Darryl Zimmerman